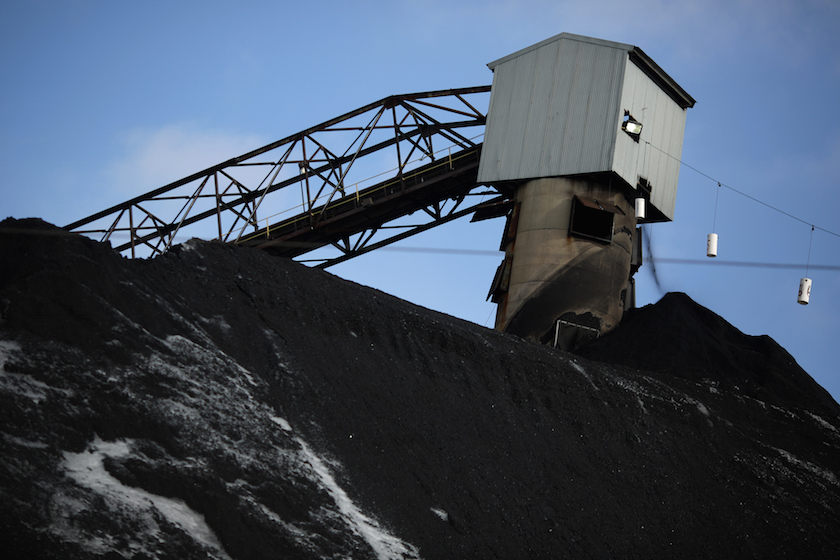 A coaling tower stands above a mound of coal at the Arch Coal Inc. Sentinel Prep Plant in Philippi, West Virginia, U.S., on Wednesday, Jan. 13, 2016. Arch, the St. Louis-based holder of the second-largest reserve of coal in the U.S., filed for creditor protection Monday, with an agreement to erase $4.5 billion in debt. Photographer: Luke Sharrett/Bloomberg
Photograph by Luke Sharrett — Bloomberg via Getty Images

(Reuters) – The centerpiece of President Barack Obama’s climate change strategy faced a key test on Tuesday as conservative appeals court judges questioned whether his administration overstepped its legal authority under an air pollution law to make sweeping changes to the U.S. electric sector.

Twenty-seven states led by coal-producer West Virginia and industry groups are challenging the Environmental Protection Agency’s Clean Power Plan rules before 10 judges of the U.S. Court of Appeals for the District of Columbia Circuit.

They argue that the EPA overstepped its regulatory authority under the federal Clean Air Act when the agency issued rules to curb greenhouse emissions mainly from coal-fired power plants. The U.S. Supreme Court has put the regulations on hold while the case is litigated.

Tuesday’s highly anticipated arguments drew a crowd of hundreds at sunrise to watch the opponents face off against the EPA, 18 states and some supportive power companies. The EPA told the judges that the agency had the power under the Clean Air Act to craft the rule, and that it was cost-effective and achievable.

The challengers could face an uphill battle to win over a majority of the 10 judges, six of whom are Democratic appointees.

Judge Brett Kavanaugh, appointed by former President George W. Bush, said while he understands the political and moral obligation to address global warming and the importance of the United States to international climate action, the Clean Power Plan’s impact on the U.S. economy and on certain coal-reliant communities should require Congress to have a say.

“This is a huge case. It has huge economic consequences,” said Kavanaugh.

He added that climate change does not give the EPA a “blank check” to use the Clean Air Act flexibly.

For more about coal, watch:

Judge Thomas Griffith, another Bush appointee, questioned: “Why is this (debate) not going-on on the Congress floor but in front of a room full of unelected judges?”

The EPA argued before that the Supreme Court has already given the EPA authority in previous cases to use the section of the Clean Air Act at issue to regulate greenhouse gas emissions.

“The EPA looked at what was going on in the real world,” he said, noting that most states are already shifting the make-up of their electric generation.

In comments indicating support for the government’s position, Judge Judith Rogers, appointed to the court by former President Bill Clinton, said the EPA should not close its eyes to trends in the electric sector which have seen utilities diversify their energy mix.

“You can’t survive in this market unless you do that,” she said. Some of the other Democratic appointees voiced similar sentiments indicating they did not think the regulations constituted a major shift as the challengers argue.

The Clean Power Plan is the main tool for the United States to meet the emissions reduction target it pledged to reach at U.N. climate talks in Paris last December.

The fate of the Clean Power Plan was thrown into question on Feb. 9 when the Supreme Court made a surprise 5-4 decision to grant a request by the challengers to put the rule on hold while the appeals court considered the matter.

The case is being heard by 10 judges rather than 11 because the court’s chief judge, Merrick Garland, has recused himself from the case. Garland is Obama’s nominee to replace Scalia.

A 5-5 ruling would leave the regulations in place.

A ruling is unlikely before the end of the year and possibly not until after Obama leaves office on Jan. 20.

The outcome of the Nov. 8 presidential election could be pivotal for the regulations. If Republican Donald Trump wins, the government could reverse the rules or decline to appeal to the Supreme Court should the appeals court strike them down. If Democrat Hillary Clinton is elected, the losing side in the appeals court ruling could be expected to take the case to the Supreme Court.

If the case does reach the high court, it may not make it in time for the justices to hear it during the court term that begins next Monday and ends in June.