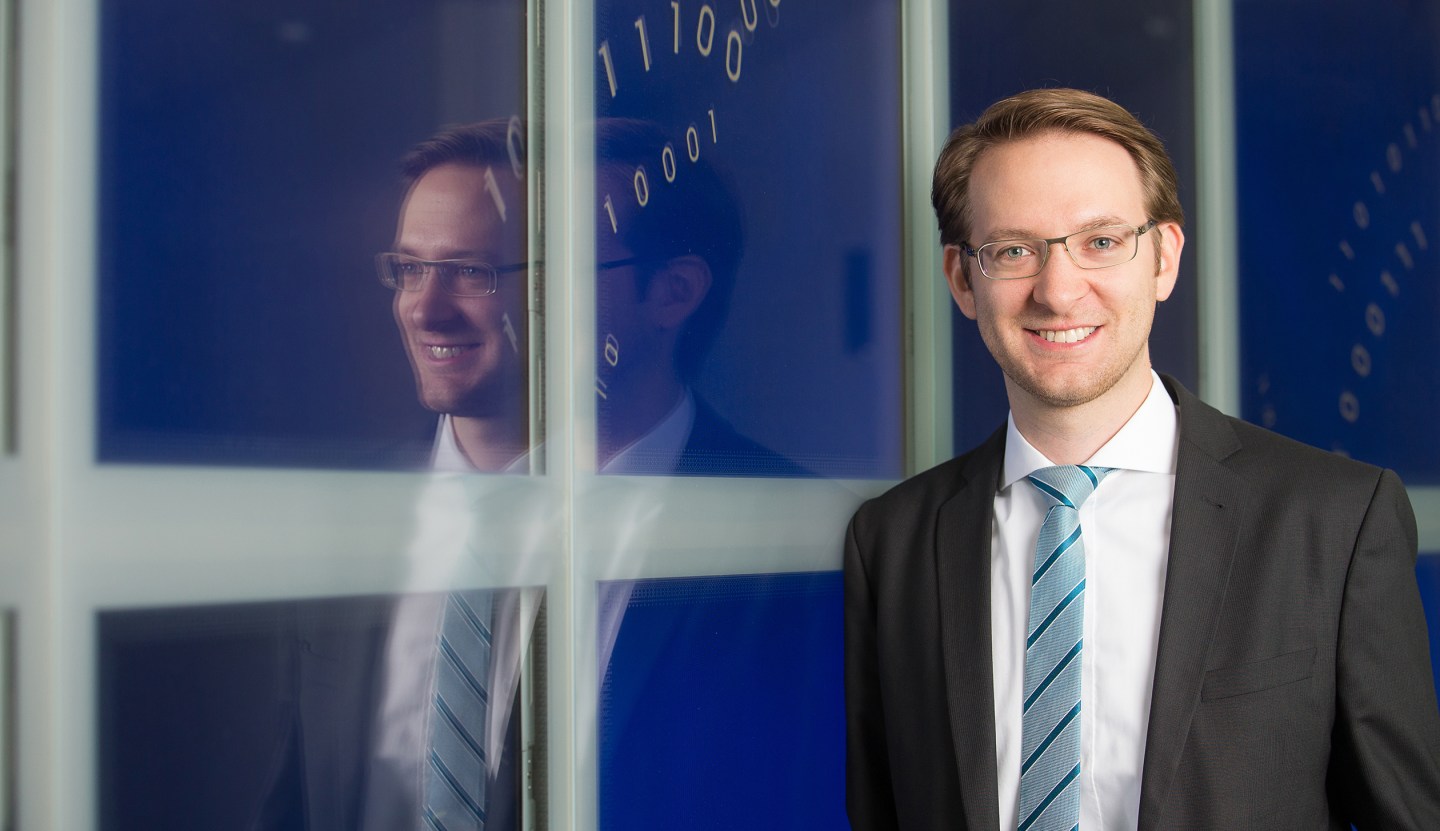 Thomas Saueressig assumed the role of chief information officer at the German software company SAP in May, which means he now leads a team of 1,500.

He’d turned 31 the month before.

Luckily, Saueressig—who is No. 5 on Fortune’s 40 Under 40 list—is used to being one of the youngest people in the room. In elementary school, he barely made the cutoff date for his class. “I was a half year younger than everyone else, which, when you are 8, is huge,” he says.

He got more comfortable with the designation as he rose through elementary school, secondary school and university, and the streak continued after graduation. By 26, he was leading a team of 12, and today, many of his employees are decades older than him.

SAP clearly takes pride in his wunderkind status. Saueressig, a memo from the company boasts, “was born only a year after Apple launched the Macintosh, flash memory was invested, and the term cyberspace was coined.” But youth can present a unique set of management challenges.

Despite America’s obsession with young leaders, its family structure socializes people into a culture where elders are shown deference, says Jennifer Deal, a senior research scientist at the Center for Creative Leadership and author of What Millennials Want from Work. When older employees end up reporting to younger managers, it shifts social norms that people grew up with. “What I’ve seen is that it makes everyone uncomfortable,” she says.

For employees, having a younger boss can feel like a slight, particularly if they were angling for the position, says Charlotte Sutton, an associate management professor at Auburn University. Meanwhile, in an attempt to diffuse any awkwardness, young managers often think “I need to assert my authority to gain respect,” says Paul Harvey, an associate professor of management at the University of New Hampshire. But with this approach, “there’s a high probability that employees will default the wrong way,” which can reinforce the belief that he or she is arrogant or was unduly promoted.

In some circumstances, the best approach is the most direct approach. Harvey recommends young managers acknowledge that older employees often have more years of experience—experience that is valuable to the team. The tactic eases any awkwardness and gives the manager access to the employee’s skillset. At the end of the day, “everyone wants to have a functional supervisor relationship,” says Harvey. “Unless there’s a hardwired perceptional bias against a young manager, it shouldn’t be a huge problem.”

That’s welcome news for the modern workforce: Data from EY shows that 62% of full-time millennial employees manage the work of others, versus 65% of Gen Xers and 46% of baby boomers. It’s a responsibility millennials gained only recently; 85% of managers from that generation say they moved into the role between 2009 and 2014.

As millennials continue to climb the corporate ladder, more leaders will find themselves managing older employees.

Saueressig is well aware he’s younger than many of his subordinates, but insists it hasn’t led to any problems in the workplace. Nevertheless, he understands the age difference may cause unspoken tension, and makes an effort to build personal bonds with older individuals by talking about travel and sports, unifying interests that “you can relate to, quite frankly, throughout your entire life.”

Morgan Vawter, the head of analytics for equipment manufacturer Caterpillar and No. 26 on Fortune’s 40 Under 40 list, leads a team of 120 that spans multiple generations, from college students to individuals who’ve worked for the company for 30 years. At 35, she falls somewhere in the middle. Like Saueressig, she tries to strike personal relationships with all her employees. When planning group bonding activities, she keeps in mind the generational diversity of her team. A college student might be game for a 6 p.m. happy hour, but that doesn’t always work for an employee with children. “We try to mix up the events,” she says, like having potluck lunch events, lunch and learn sessions, and volunteering excursions.

Beyond relating to employees on a personal level, both Saueressig and Vawter strictly adhere to Harvey and Sutton’s suggestion of giving credit where credit is due. “I try to treat people like experts,” says Vawter. Part of being an effective leader is recognizing when your employees know more than you do. Regarding analytics, “I work with people who have advanced degrees,” she says. “They are extremely educated and in a lot of cases they are more deep into a subject matter than I am.”

Related: How the Tidiest Woman in the World Organizes Her Email

Listening to and acknowledging individuals’ input is an important step towards gaining their respect. In her first 30 days on the job, Vawter met with all the leaders on her team, as well as several other individuals, and asked them questions such as, “What are your biggest constraints?,” and, “What are the most promising unexploited analytics opportunities?” She shared the feedback she received in an all-hands meeting.

But listening was not enough. She wanted to act on what they had to say, and made strategic decisions for the team based on the input she collected in those early one-on-one meetings. That included “kicking off projects to address our operational challenges” and “hiring for areas where we had insufficient resources.”

“If you listen but don’t do anything about it,” she says, “you’re not getting anything out of the exercise.”