5 Things You Should Know About the Deutsche Bank Train Wreck 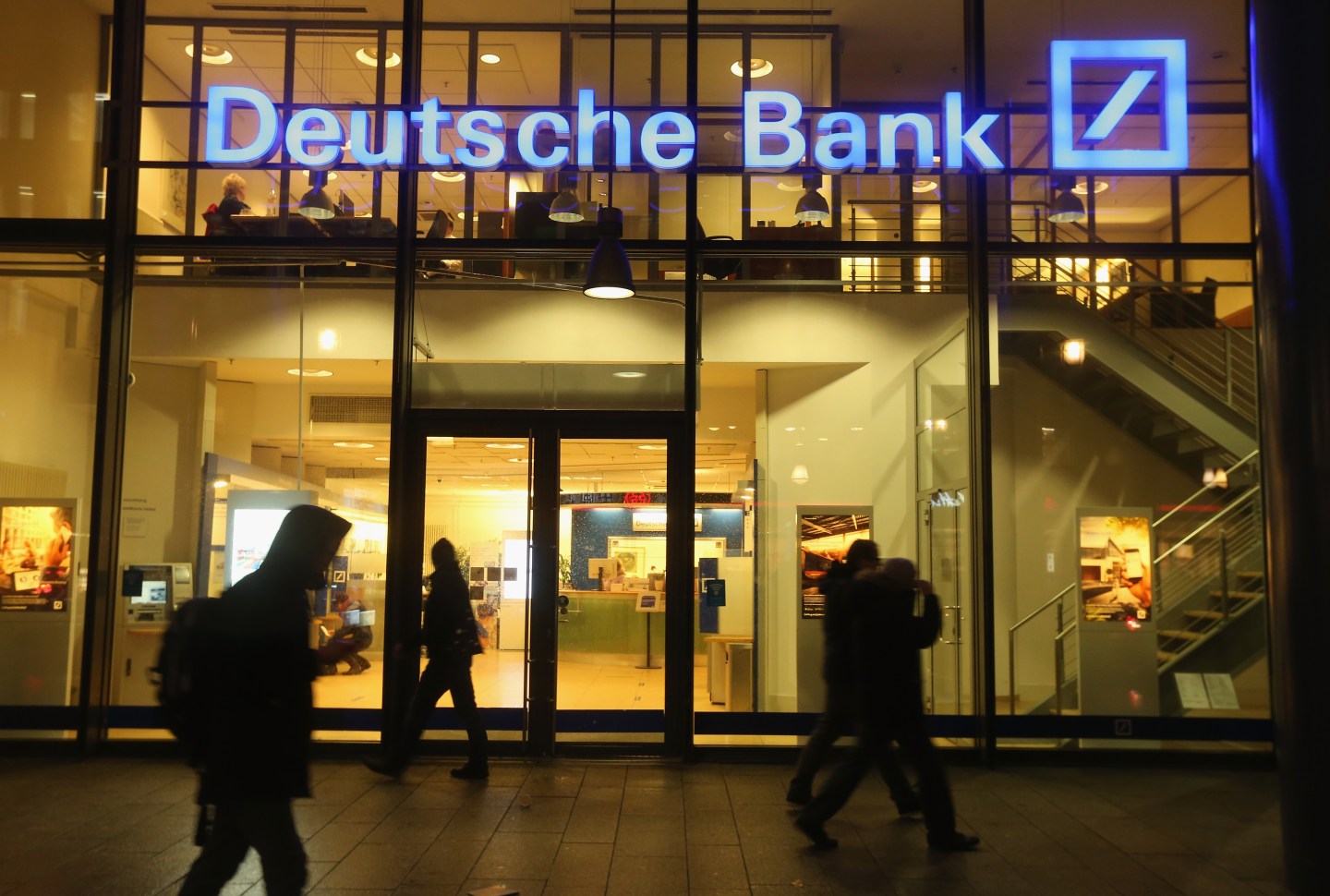 Deutsche Bank—Germany’s largest, and in many ways the embodiment of the global financial system—as you may have heard, is in a spot of bother.

The U.S. government is considering imposing a fine of around $14 billion on the bank for selling faulty mortgage-backed securities in the run up to the financial crisis. That’s on top of the fact that Deutsche and other European banks have been struggling with negative interest rates, which are squeezing profits. In all, Deutsche Bank’s (DB) market cap has now shrunk to nearly its proposed fine, provoking fears that the bank might have to be helped out the German government, or be wiped out. So far, Germany’s Chancellor Angela Merkel has said that there will be no bailouts for Deutsche Bank.

But while Germany says it won’t stop a Deutsche bank failure, how worried should the U.S., and investors, be about it? Ultimately, the new regulations put in place since 2008 to contain Too-Big-To-Fail banks should mean that there will be no direct impact on the average American. But here are a few reasons why you should still keep an eye on it.

1. Deutsche Is Too Interconnected to Fail

Too Big to Fail was always a bit of a misnomer. What really makes a bank a risk to the financial system as a whole is the degree to which it is interconnected with other institutions, i.e., its ability to spark chain reactions of non-payment if it should ever default. By this measure, Deutsche is frighteningly indispensable. It’s a counterparty to virtually every major bank in the world, in virtually all asset classes. This illustration from an IMF report in June gives you some idea. This is why I argued yesterday that the German government, which together with the European Central Bank is responsible for supervising Deutsche, would be highly unlikely to let it fail in a disorderly manner à la Lehman Brothers.

Deutsche has the world’s largest so-called derivatives book—its portfolio of financial contracts based on the value of other assets—in the world. It peaked at over $75 trillion, about 20 times German GDP, but had shrunk to around $46 trillion by the end of last year. That’s around 12% of the total notional value of derivatives outstanding worldwide ($384 trillion), according to the Bank for International Settlements.

How scary is that? Less than it sounds. The overwhelming majority of those exposures are hedged against other trades, resulting in a far lower net exposure. Those hedges can fail, especially when, as was the case back in 2008, the likes of Lehman and AIG (AIG) either failed or looked like they would. But new regulation introduced since then has channelled much of these derivative trades onto exchanges or other “central counterparties,” which—at least in theory—reduce the risk of domino effects. That theory hasn’t really been tested seriously since 2009, mind you.

The European Central Bank requires Deutsche to hold enough capital to cover a potential loss, adjusted for risk, of 10.25% its assets—the loans and trades it makes. The minimum mandate increases to 12.5% by 2019. Losses, including legal ones, eat into capital. Deutsche has so far only provisioned for a fine of $3.3 billion. Most analysts say that any final settlement over $4 billion could force it, yet again to raise more capital, which is why its stock price is falling now. But German law limits the amount of new shares it can issue in a year to 50% of the outstanding total. At current market levels, that caps the amount it could raise at 8 billion euros.

4. Deutsche Bank Is Already in the Fed’s Bad Books

U.S. supervisors, and U.S. banks, have never really forgiven Deutsche for the free ride it got during 2008. Although it got no money directly from TARP, it got $12 billion from the huge rescue loan given to AIG. Without that, it would have been toast, due to its own lack of loss-absorbing capital, which was in turn a product of the loopholes in regulation, and of its own cavalier attitude to risk.

The Federal Reserve has had a bee in its bonnet about Deutsche ever since. To a degree, the Fed’s own overhaul of U.S. banking regulation is due to its concerns that Deutsche is still using regulatory loopholes to understate the amount of risk on its books. And it failed Deutsche in this year’s stress tests, for the second year in a row, saying it had “substantial” weaknesses in its capital planning.

5. Deutsche’s Outlook Is Hardly Any Brighter

U.S. banks all faced at least some of the problems Deutsche is facing today. However, their saving grace was that the U.S. economy rebounded, enabling them to start lending again at a decent profit margin. At the same time, the stock and bond markets have (at least until this year) provided a decent source of income. Deutsche, by contrast, is struggling to earn its way back to health.

Its global markets division, once its earnings powerhouse, saw revenue fall 28% in the first half of this year. It lost a record 6.8 billion euros last year. On top of that, Eurozone credit growth is still limp despite the ECB’s negative interest rate policy which costs Deutsche money every day. It wants to sell Postbank, a low-earning German retail bank, but the sad fact is that no-one wants it at any price. The bank is running out of options to restore its balance sheet.

We may yet get to see how well all those new regulatory safety nets put in place since 2008 work.

CORRECTION: An earlier version of this story incorrectly referred to Angela Merkel as Germany’s ‘Prime Minister’.