How Donald Trump Could Legally Make Himself Richer In Office 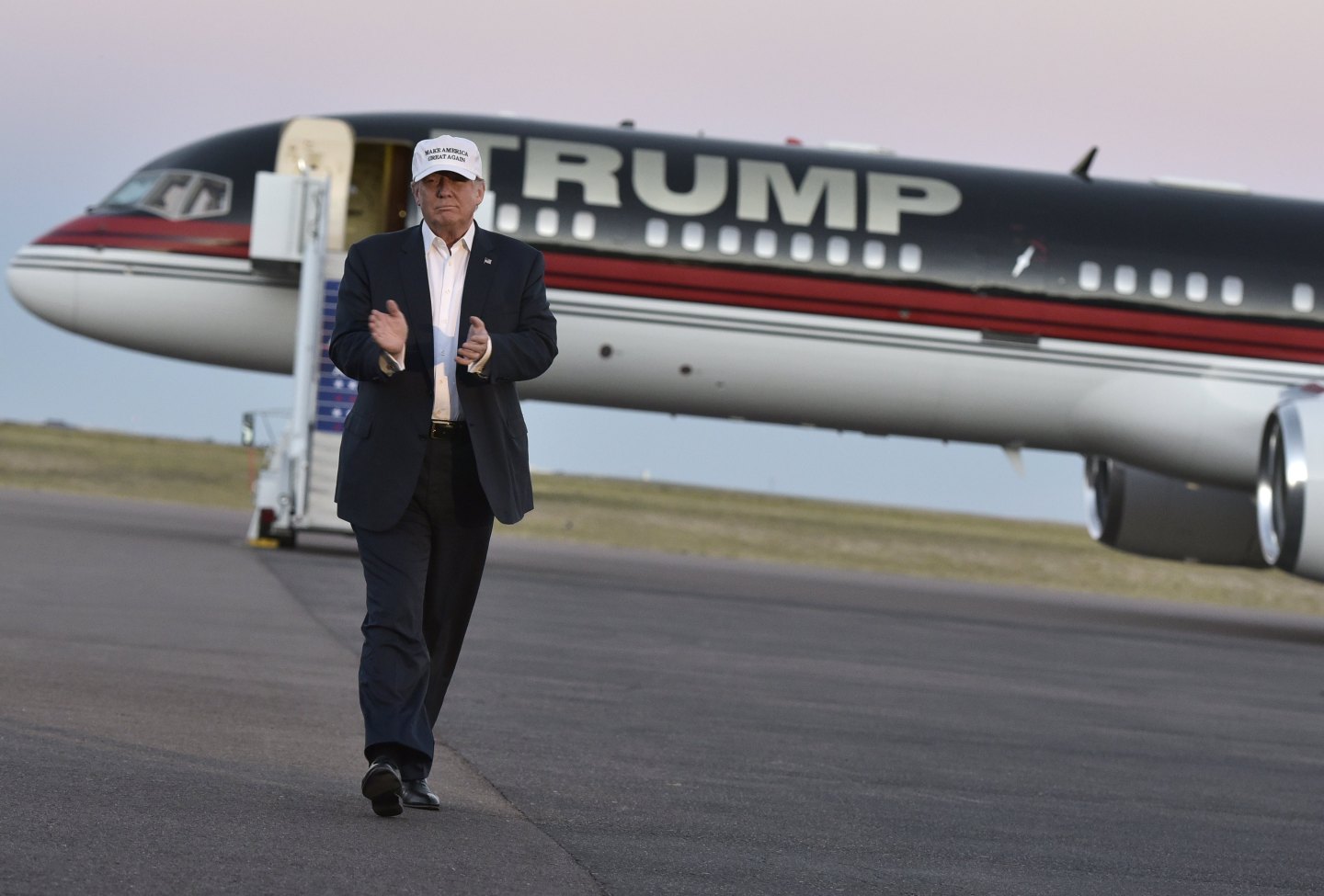 Republican presidential nominee Donald Trump walks across the tarmac as he arrives for a rally at the JetCenters of Colorado in Colorado Springs, Colorado on September 17, 2016. / AFP / MANDEL NGAN
Photograph by Mandel Ngan—AFP/Getty Images

A couple dozen television cameras and twice as many reporters gathered Sept. 16 at Donald Trump’s new Washington, D.C. hotel for what was billed as a news conference. But first, the candidate had something else in mind. “Nice hotel,” he said with an exaggerated nod toward those watching live on TV at the start of the event, which was broadcast live on three cable stations. Less than an hour later, he invited news cameras to accompany him on a tour of the property, the second time in as many months he had used his campaign to promote his newest property.

This was all a part of the Trump way. From his first flirtations with running for office two decades ago Trump has made no practical distinction between his political interests and his business promotion. The braggadocious showman has hawked bespoke water and a long-defunct steak business, while taking his campaign to five golf courses in two countries, three hotels and a winery. Should he win the White House, he has publicly suggested he would retain ownership of his empire, while passing day-to-day control to his children. That would make a Trump presidency unlike any in modern American history, with a commander in chief who is able to directly influence his net worth almost daily from the Oval Office.

Could he profit from promoting his holdings in office? Absolutely, say legal scholars. Just as there is no law barring a candidate from using his soapbox to make money during a campaign, Trump will be able to promote businesses he continues to own from the West Wing podium. He would also have wide latitude to take official acts that benefit his empire. “There would be nothing that would preclude him from making a decision on trade or otherwise that could impact, for better or worse, those interests,” says Don Fox, the former General Counsel and Acting Director of the Office of Government Ethics. “It simply would not be a violation of law.”

That’s because the nation’s founders designed a system where the President is primarily answerable directly to voters. The potential for conflicts of interest is ingrained in a government “of the people.” James Madison wrote in the Federalist Papers it would be “vain” to believe that future leaders could always separate the self-concern from the national interest. “Conflict of interest for elected officials has been kind of embedded in our constitutional framework,” said Richard Painter, the former chief ethics lawyer for President George W. Bush. As ethics laws were written and revised over the years the rationale has remained the same—no issue can be off limits for a president.

That means Presidential press conferences could be legally held from the Trump hotel, where a president Trump continues to boast of the property’s offerings. Trump bottled water could be served in the White House, and Trump could choose to stay in his properties on foreign trips. Lobbying groups courting his favor would be allowed to hold conferences in his hotels or retreats at his golf courses. And Trump would be free to hawk to the masses where they can purchase his wardrobe collection.

But that does not mean that President Trump would be free of all criminal and constitutional scrutiny for his business operations. There are two main legal limits he would have to be wary of, ethics experts say: Traditional prosecution under government bribery laws and a little noticed provision in the constitution known as the Emoluments Clause, which prohibits U.S. officials from taking money from foreign sources without consent of Congress.

Why Bill Clinton, George W. Bush, and Others Get Huge Speaking Fees

Bribery laws are traditionally straightforward, and can be investigated by the Justice Department or congressional committee. If Trump committed a specific official act in exchange for a specific financial benefit he could be liable. (For instance, if someone promised to buy a condo in his building or hold a conference in his hotel in exchange for signing a piece of legislation.) A criminal probe could be conducted within his Justice Department, but it would likely require the appointment of special prosecutor, which could only be done with his consent. Congress could also seek his impeachment for wrongdoing.

The constitutional barrier is a bit less clear-cut. The Emoluments Clause bans anyone holding government office from accepting “any present, emolument, office, or title” from a foreign government without congressional approval. The clause has been the subject of almost no legal scholarship or case law, but has been interpreted by Congress and the Office of Legal Counsel to prohibit even the smallest arrangements, like educational scholarships and business consulting deals from foreign interests.

The prohibition extends even to U.S. service-members subject to recall to active duty, and to dealings with universities and corporations controlled by other governments. Senate Republicans raised questions earlier this year with the Department of Justice whether Bill Clinton’s paid foreign speeches may have violated Emoluments Clause, though no action was ever taken. “This isn’t a law that can be fixed—it’s the Constitution,” said Painter.

For Trump, whose web of foreign business interests extends from Azerbaijan to Panama, taking office could put all of those deals under renewed scrutiny. Even Trump’s oft-touted status as landlord to the Bank of China in Trump Tower could place him in jeopardy, if the state-backed bank agreed to pay above-market-rate rents in the future.

Should Trump win, every business agreement that his companies enter could be the subject of congressional investigation into potential violations of the Emoluments Clause, Painter said. “Every one of those contracts if he becomes President must be at arms length,” said Painter, “or he can get himself impeached.”

Trump has made clear he won’t follow his processors and take steps to avoid the appearance of conflict. Past party nominees and presidents have placed assets into Office of Government Ethics-sanctioned blind trusts or at least index funds. Trump has only said he will pass off control of his empire to his three elder children who serve as executives at his company. He has said he won’t transfer ownership, likely because it would incur a 40% ‘gift tax’ penalty.

The result is that Trump will be hardly unaware of what he holds and where he stands to make money. Most of his buildings have his name on them, after all. “I would put it in a blind trust,” Trump said in a January 2016 primary debate. “Well, I don’t know if it’s a blind trust if Ivanka, Don and Eric run it. If that’s a blind trust, I don’t know. But I would probably have my children run it with my executives and I wouldn’t ever be involved because I wouldn’t care about anything but our country, anything.”

Such an arrangement would be unprecedented in the modern era. Painter, the Bush ethics lawyer, said that he would advise Trump to remove all potential vulnerabilities either by selling his entire portfolio either to another business or through a public offering, and to place the resulting cash into an OGE-sanctioned blind trust.

Democratic nominee Hillary Clinton has faced scrutiny too over her ties to her family’s global foundation. She and former President Bill Clinton have promised to step down from the board if she’s elected, and the group has taken steps to significantly curtail its fundraising and operations in preparation. But the ethics officials recommended that Chelsea Clinton also remove herself from the group for the sake of appearances. Clinton has said that the determination about her daughter’s role will be made after November 8.

But in the end, American voters are likely to be the ultimate regulator of how much the next President is able to entangle personal and family business interests in office. No law requires Trump to divest his holdings or even Bill Clinton to stop collecting checks overseas on his speaking tours. “They could both do absolutely nothing and it would be legal,” Fox says. “It would come down to optics and the remedy would be the next election cycle.”