This Bill Could Allow Another Fraud Like Wells Fargo’s 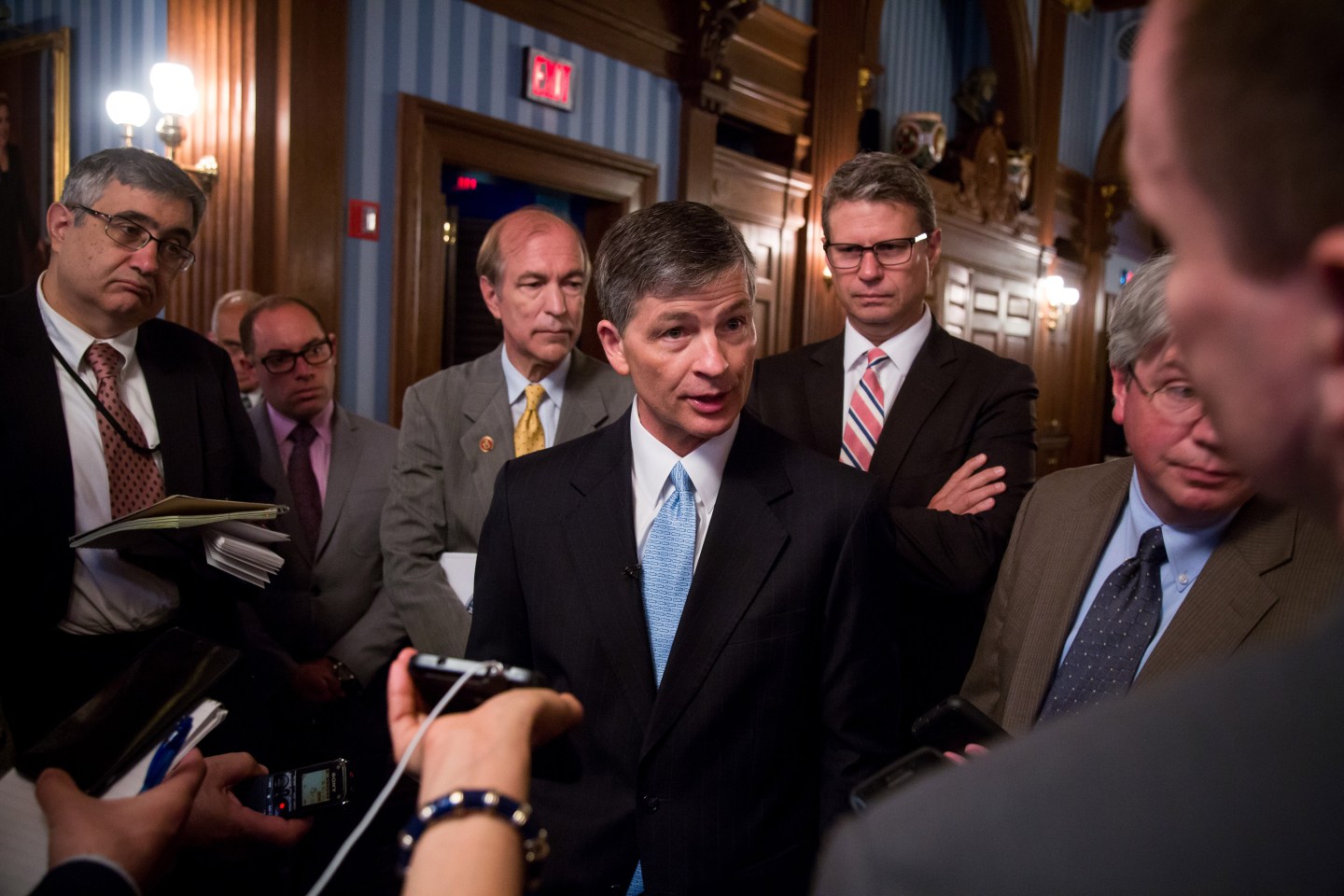 Representative Jeb Hensarling, a Republican from Texas and chairman of the House Financial Services Committee, center, speaks to members of the media after unveiling the Financial Choice Act with Representative Scott Garrett, a Republican from New Jersey, center left, and Representative Bill Huizenga, a Republican from Michigan, at the Economic Club of New York in New York, U.S., on Tuesday, June 7, 2016. Hensarling today proposed the idea of raising several hundred billions of dollars in additional capital and Washington letting you break free from a litany of burdensome rules, a key provision of his long-shot proposal for scrapping the Dodd-Frank Act. Photographer: Michael Nagle/Bloomberg via Getty Images
Michael Nagle—Bloomberg via Getty Images

The Financial CHOICE Act, a bill that would essentially repeal key protections within the Dodd-Frank Act, was approved by the House Financial Services Committee on Sept. 13. While it’s unlikely the bill will ever become law, it is nevertheless a stunning example of Congress’ inability to understand the implications of failures in corporate governance.

It’s even more stunning when considering the recent news that Wells Fargo employees created millions of fake accounts for the bank’s customers in an effort to meet unreasonable internal sales targets and boost the low-level employees’ compensation. Dodd-Frank was created in 2010 precisely because of such predatory banking practices. Since its enactment, it has served as a watchdog for large financial institutions in an attempt to prevent the reemergence of “too big to fail” corporations that led our country into a recession. However, the banking industry has spent considerable resources lobbying for its repeal. They claim the law hinders economic growth through overly burdensome regulations.

The Financial CHOICE Act is the banking industry’s answer to Dodd-Frank. While CHOICE stands for “Creating Hope and Opportunity for Investors, Consumers, and Entrepreneurs,” the legislation does nothing of the sort. Instead, it repeals most of the corporate governance provisions contained within Dodd-Frank, provisions that provide greater transparency and accountability to shareholders. The act would repeal or significantly reduce the requirements that publicly-traded companies disclose CEO pay, allow shareholders to vote on executive compensation, and hold back incentive-based compensation in cases of fraud. Furthermore, it would repeal the Securities and Exchange Commission’s authority to issue rules on shareholders’ influence in corporate board elections and disclosures about how CEO and chairman roles are structured.

In other words, it gives large financial institutions more freedom to do what’s in their best interest, as opposed to what’s in the best interest of their shareholders, customers, and employees. That’s not exactly the gratitude one would expect from an industry that received a $700 billion bailout from the American public not too long ago.

Proponents of the Financial CHOICE Act argue that the repeal of Dodd-Frank’s corporate governance provisions is necessary to move the financial industry forward. They claim that compliance with these regulations is costly and interferes with the ability of banks to adequately service customers. Of course, they don’t mention the act’s removal of the Consumer Financial Protection Bureau’s (CFPB) authority to punish companies for practices that are abusive to consumers.

The growing fraud scandal at Wells Fargo, the nation’s third-largest bank, is reason enough for the bill to be shelved. Earlier this month the CFPB and other agencies imposed a $185 million fine on the bank for its widespread fraud. At a hearing before the Senate Banking Committee earlier this week, Wells Fargo CEO John Stumpf exposed the magnitude of the bank’s corporate governance failures, which contributed to the scandal. Stumpf testified that the fraud was first discovered in 2011, when the bank fired more than 1,000 employees for opening fake accounts. Despite the fact that this represented more than 1% of Wells Fargo’s workforce, neither Stumpf nor the bank’s board of directors were apprised of the fraud until 2013. Since then, more than 4,000 additional employees have been fired. Not surprisingly, no senior executives have been terminated.

Dodd-Frank isn’t perfect: Fraud along the magnitude of the Wells Fargo scandal isn’t supposed to occur within financial institutions in the post-Dodd-Frank era. The reality is that stronger corporate governance reforms with greater transparency and accountability are necessary to protect the American public. Until Congress enacts a bill that conforms to the original intent of Dodd-Frank and includes comprehensive corporate governance reform in the financial sector, it is simply reckless to repeal the legislation.

Mark Rogers is founder and CEO of BoardProspects.com. He is not an investor of the companies mentioned in this article.