Charlotte Has Another Night of Protests Over Police Shooting 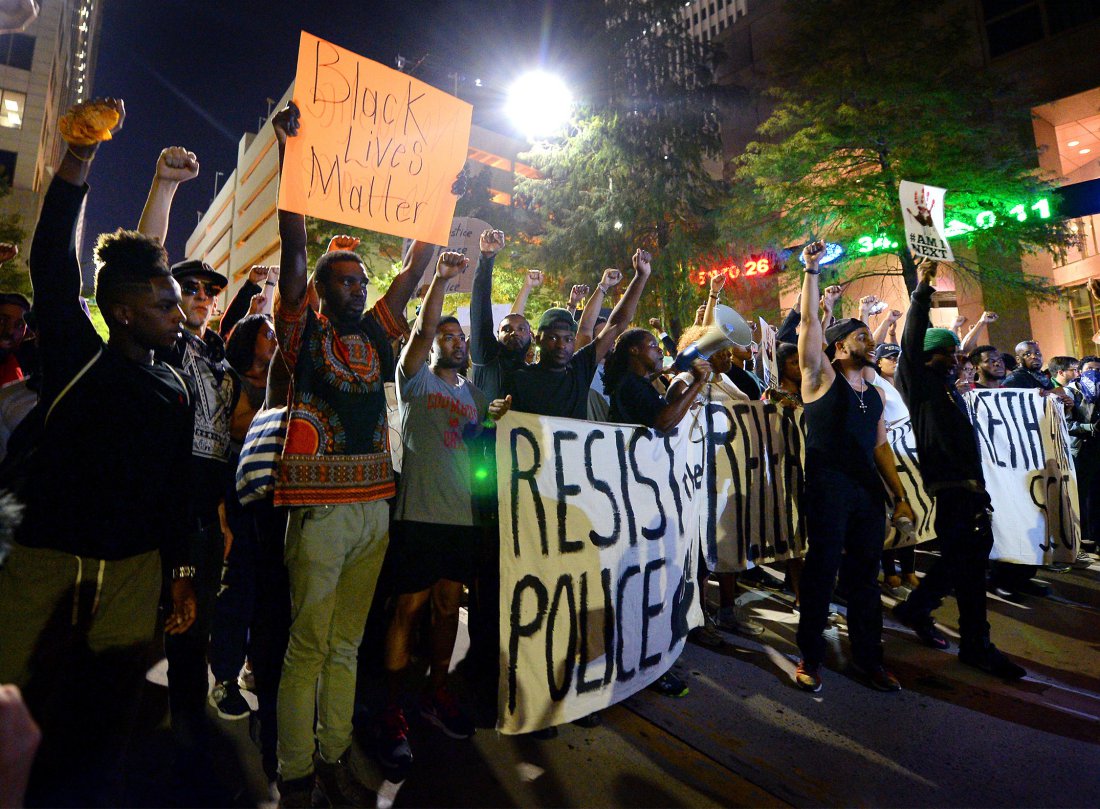 Protesters stand in unity as they prepare to march throughout the city to protest Tuesday's fatal police shooting of Keith Lamont Scott, in Charlotte, N.C., Friday, Sept. 23, 2016. After darkness fell, dozens of people carried signs and chanted to urge police to release dashboard and body camera video that could show more clearly what happened. (Jeff Siner/The Charlotte Observer via AP) /The Charlotte Observer via AP)
Jeff Siner AP

Demonstrators carried signs, chanted and marched in a peaceful protest hours after the family of a black man shot by police released video showing the events leading up to his death.

Friday’s march through Charlotte’s business district was the fourth night of demonstrations over the shooting of Keith Lamont Scott earlier in the week.

After darkness fell, dozens of people took to the streets to urge police to release dashboard and body camera video that could show more clearly what happened. Police have said Scott was armed, but witnesses say he held only a book.
The group, which appeared smaller than previous nights, carried a banner that said “Just Release the Tapes.”

Earlier in the day, footage recorded by Keith Lamont Scott’s wife and released by his family shows his wife repeatedly telling officers he is not armed and pleading with them not to shoot her husband as they shout at him to drop a gun.

The 2 ½-minute video released by the family does not show the shooting, though gunshots can be heard. In the video Scott’s wife, Rakeyia Scott, tells officers that he has a TBI, or traumatic brain injury. At one point, she tells her husband to get out of the car so police don’t break the windows. She also tells him, “don’t do it,” but it’s not clear what she means.

As the encounter escalates, she repeatedly urges police, “You better not shoot him.”

After the gunshots, Scott can be seen lying face-down on the ground while his wife says, “He better live.” She continues recording and asks if an ambulance has been called. The officers stand over Scott. It’s unclear if they are checking him for weapons or attempting to give first aid.

Charlotte-Mecklenburg Police Chief Kerr Putney said Friday that there is footage from at least one police body camera and one dashboard camera that shows the shooting. The family of Scott, 43, was shown that footage Thursday and demanded that police release it to the public.

Charlotte Violence: How Employees Can Make A Difference

Putney said Friday that releasing the footage of Scott’s death could inflame the situation. He has said previously that the video will be made public when he believes there is a “compelling reason” to do so.

“It’s a personal struggle, but I have to do what I think is best for my community,” Putney said.

During the same news conference, Charlotte Mayor Jennifer Roberts said she believes the video should be released, but “the question is on the timing.”

Charlotte is the latest U.S. city to be shaken by protests and recriminations over the death of a black man at the hands of police, a list that includes Baltimore, Milwaukee, Chicago, New York and Ferguson, Missouri.

Earlier in the week, the Charlotte protests turned violent, with demonstrators attacking reporters and others, setting fires and smashing windows of hotels, office buildings and restaurants.

Forty-four people were arrested after Wednesday’s protests, and one protester who was shot died at the hospital Thursday. City officials said police did not shoot 26-year-old Justin Carr. A suspect was arrested, but police provided few details.

On Thursday, protests were largely peaceful after National Guard members came to the city to help keep order and the mayor imposed a curfew.

On Friday, a choir from The Citadel Church in Greensboro stood a street corner singing spirituals for two hours, drawing a crowd of curious onlookers who were moved enough to clap along.

The Rev. Gregory Drumwright directed the choir of approximately two dozen, saying they wanted to be “vessels of peace, vessels of righteousness, not rage.”