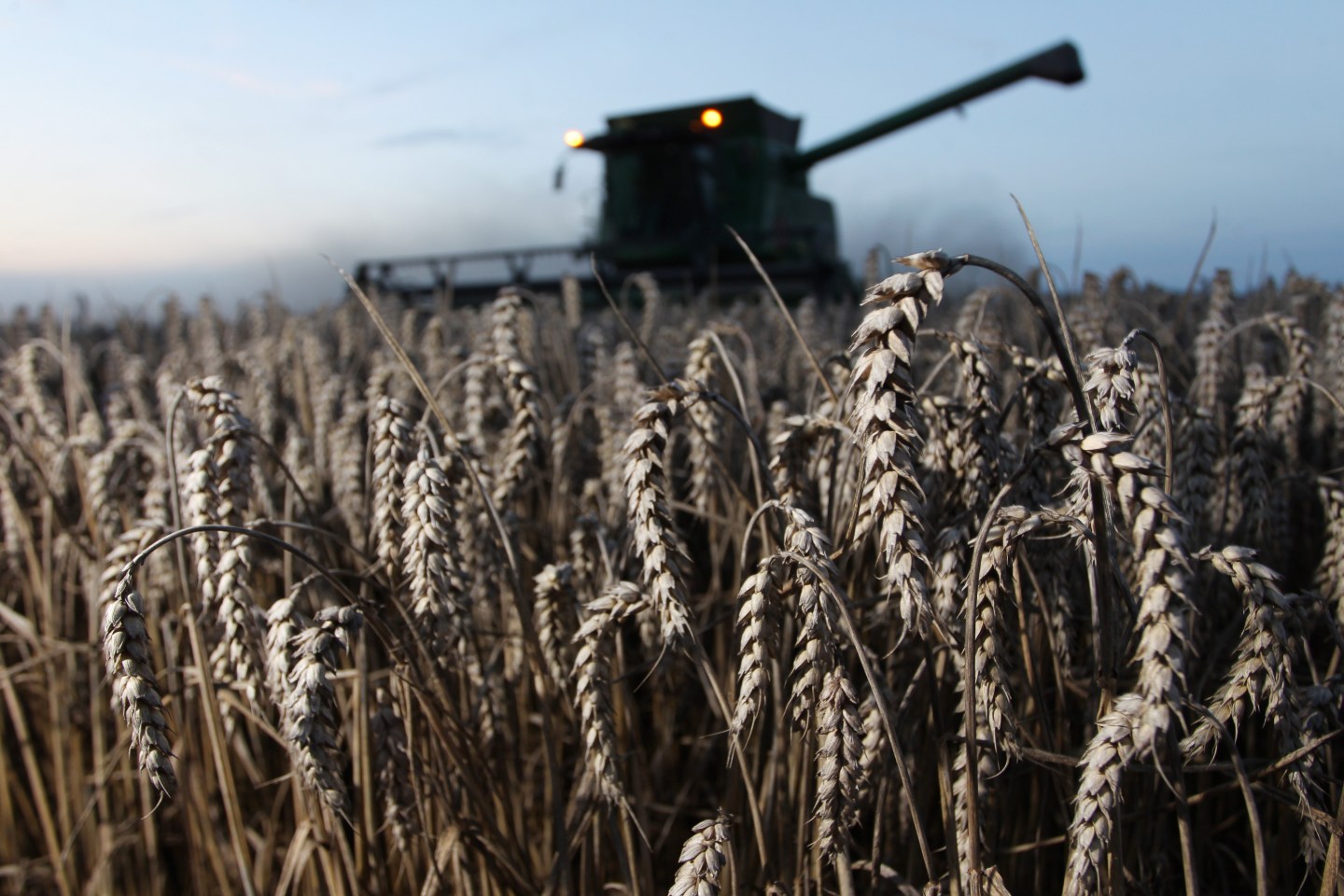 A farmer on a combine harvester crops wheat on a field in Hohenossig near Leipzig, eastern Germany, on August 8, 2014. As meteorologists forecast precipitation, farmers work on their fields day and night to bring their harvest in. AFP PHOTO / DPA / SEBASTIAN WILLNOW / GERMANY OUT (Photo credit should read SEBASTIAN WILLNOW/AFP/Getty Images)
Photograph by Sebastian Willnow — AFP/Getty Images

The swaying durum crops on Dave Marzolf’s farm look lush and even, bearing full kernels of the wheat used to make pasta.

On a closer look though, Marzolf’s durum kernels are infected with fusarium, a disease that produces a toxin known as vomitoxin and has forced him to sell the crop for animal feed.

Durum, which thrives in desert-like conditions of dry, hot days and cool nights, is processed into a coarse product called semolina that is used to make pasta. Canada, the world’s top durum exporter, ships much of it to Italy, Algeria and Morocco.

Vomitoxin and other problems resulting from torrential rain have also spoiled crops in France, the European Union’s biggest durum exporter.

North America’s huge durum harvest has weakened prices by one-quarter year over year, but industry officials have said they are likely to climb as contaminated supplies are harvested.

Much of it, however, is unsuited for food production, after fusarium spread in humid conditions. Millers aim to limit vomitoxin levels, which can affect flavor and processing performance and pose a risk to humans if ingested in high amounts.

“It wouldn’t surprise me if one-third of the (Canadian) crop would not be able to move into milling or food channels,” said Jerry Klassen, Winnipeg manager of crop trader GAP SA Grains and Produits.

But pasta eaters may not need to swallow higher prices. World durum supply is expected to rise by 1.3 million tons to 46.7 million in 2016/17, exceeding demand of 37.9 million, according to Agriculture and Agri-Food Canada.

For more on agriculture, watch:

Top-quality durum sold at Saskatchewan grain elevators for C$251.87 per ton as of Sept. 7, up more than $2 per ton from a week earlier, but 24% lower than a year ago, according to the provincial government.

Supply is enough now, but prices are likely to rise as the harvest progresses, Klassen said. Already the price spread has widened between the top quality grade and third best to C$100 per ton, depending on the location in Canada, he said. Normally, the spread is about C$30.

In North Dakota, the biggest U.S. durum grower, quality looks good based on current samples, but is likely to drop as vomitoxin-infected samples arrive from the northwestern part of the state, said Erika Olson, marketing specialist at North Dakota Wheat Commission.

Cash prices in the state, down 14 % year over year, are likely to strengthen this autumn as farmers hold off on selling high-quality supply, she said.

“The question is, what is the level of the problem and how will the mills and elevators be able to deal with that,” said Jim Meyer, president of St. Louis-based Italgrani USA, which owns mills and grain elevators. “There’s just a lot of unknown there.”

That uncertainty has nudged cash bids higher for U.S. durum and sharp increases may occur in certain locations, said Courtney Boryski, a trader at Nebraska-based Hansen-Mueller.

North American millers, including Treehouse Foods and Ardent Mills, a joint venture of Cargill Inc, CHS Inc and ConAgra Foods Inc, can mix varying qualities to meet the U.S. standard for vomitoxin. But “you can only blend so much,” Olson said.

“We are going to export a lot less from France,” he said.