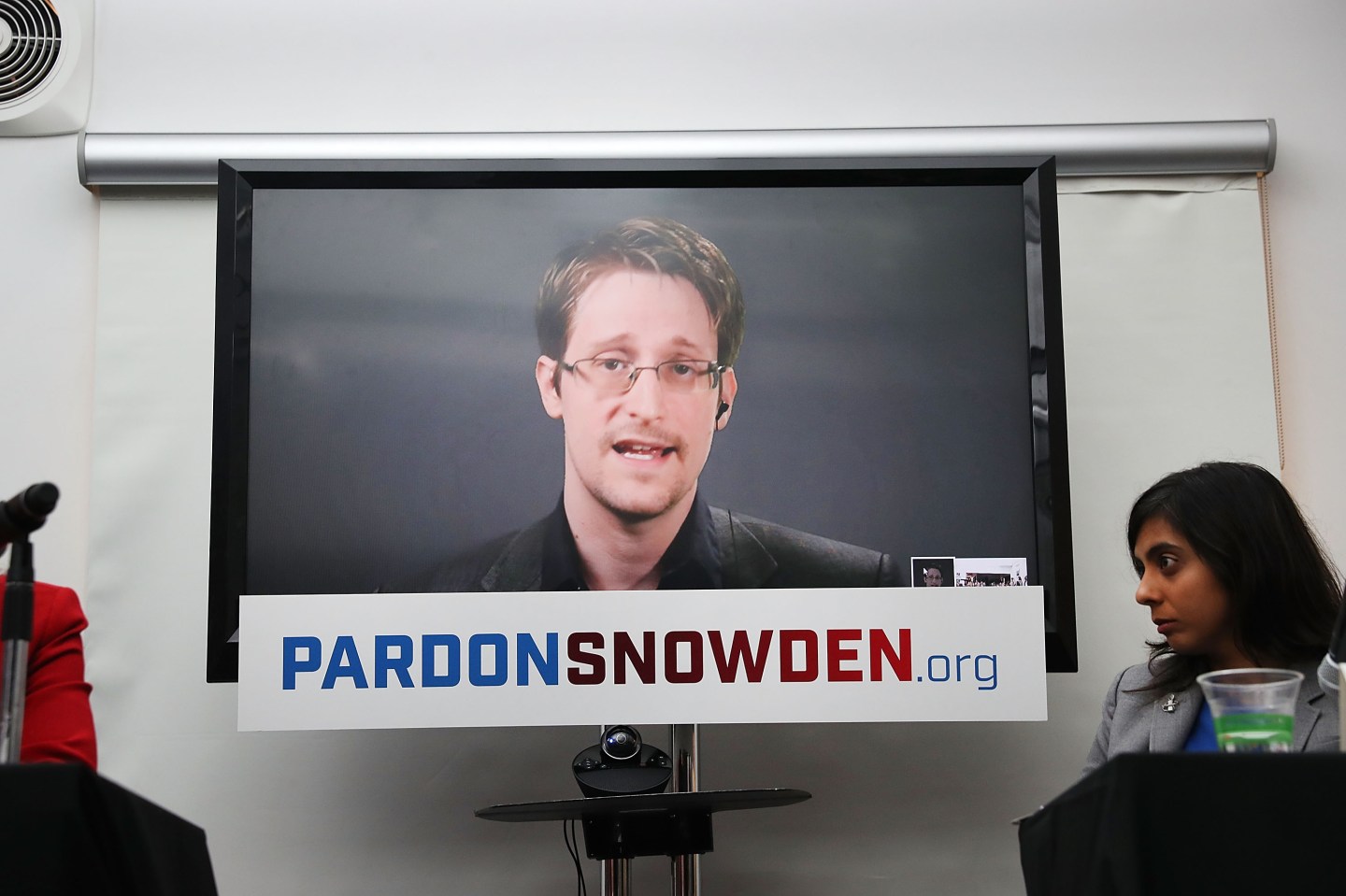 It was a bit of a surreal scene on Wednesday night: Edward Snowden, the NSA leaker who also has been living in exile in Moscow, was beamed into Manhattan’s Upper West Side, joining the audience in singing “Happy Birthday” to Oliver Stone, director of Snowden, the new biopic released on Friday.

Snowden, considered a whistleblower by supporters and a traitor by others, has been busy on the lecture circuit, speaking (via a remote-controlled robot with a video screen) at universities, tech conferences and other events around the globe. But with Snowden, a movie starring Joseph Gordon-Levitt (Inception) and Shailene Woodley (The Divergent series), his campaign to get a full presidential pardon is getting some major assistance from Hollywood. Snowden faces multiple criminal charges in the U.S. under the Espionage Act.

The movie, released nationwide on Friday, depicts Snowden as a hero and patriot, following him from precocious CIA worker to contractor for the National Security Agency, when he famously leaked classified documents exposing the wide scope of the government’s Internet surveillance at home and abroad. “It tells a true story about our government’s deployment of a global mass surveillance system without democratic consent. And, it tells a true story about the person who came forward to reveal that to journalists out of a sense of patriotism, conviction, and love of country,” said Ben Wizner, who is Snowden’s lawyer and the director of the American Civil Liberties Union’s Speech, Privacy, and Technology Project.

The talk Wednesday was broadcast live in hundreds of theaters across the U.S. as part of an event dubbed “Snowden Live” by its organizers, Fathom Events and the movie’s distributor, Open Road Films. Thomas Drake, a former NSA executive who, like Snowden does now, once faced charges under the Espionage Act, was in attendance in New York.

“If you want to stop the NSA from spying on you, the best way to do that right now, and perhaps the only way we can do that given the disparity of resources, is through the political process,” Snowden told the crowd on Wednesday night.

The ACLU and a handful of other human rights organizations launched a global petition seeking Snowden’s pardon on Wednesday, hours before the movie screening. Wizner, who serves as Snowden’s primary U.S. advocate and helps facilitate his virtual appearances, told Fortune that it’s impossible to overstate the importance Snowden’s public appearances play in boosting his case for a pardon, even if he can’t fulfill every appearance request because “the volume of requests so far exceeds the hours in his day.”

“It’s hard to imagine how different the global debate over surveillance and democracy that we’ve had these last few years would have been without his participation,” Wizner said.

There’s no question that Stone’s movie has the potential to help Snowden’s case, as well, assuming it performs well enough at the box office (analysts expect the movie to get off to a decent, but not overwhelming, start with an opening weekend that’s likely to pull in roughly $10 million domestically). Reviews of Stone’s movie have been mixed, with Snowden earning just a 58% rating with critics on Rotten Tomatoes as of Friday.

Still, with the movie set to hit U.S. theaters and the campaign to pardon Snowden in full swing, the House Intelligence Committee opted to make its feelings known in a letter urging Obama not to pardon Snowden, who the committee dubbed a “serial exaggerator and fabricator” in its summary of a two-year investigation into his actions.

Snowden isn’t receiving money from Stone’s film, according to Wizner (although Snowden has received money on the lecture circuit). Stone told Snowden he was making the movie with or without the subject’s cooperation, Wizner said, so Snowden ultimately decided it was better “to help Oliver tell a more accurate story.” The end result, according to Wizner, is generally accurate, though some events are dramatized.

Of course, there are still plenty of people, especially those in the U.S. government, who would vehemently disagree with Wizner on that point.

If the comments from White House press secretary Josh Earnest are any guide, it seems unlikely that the Obama administration would choose to pardon Snowden. “Edward Snowden is not a whistleblower,” he told the White House press corps this week, saying Snowden should return to the U.S. and face trial.

Wizner, however, argues that the merits of Snowden’s case are “very strong.” When asked if a more reasonable outcome would be for Snowden to reach an agreement with the U.S. government that would significantly trim the 30-year prison sentence he could face—an outcome Snowden himself has said he’s amenable to—Wizner said he’s eyeing only a full pardon.