This Monument Could Be Manhattan’s Answer to the Eiffel Tower 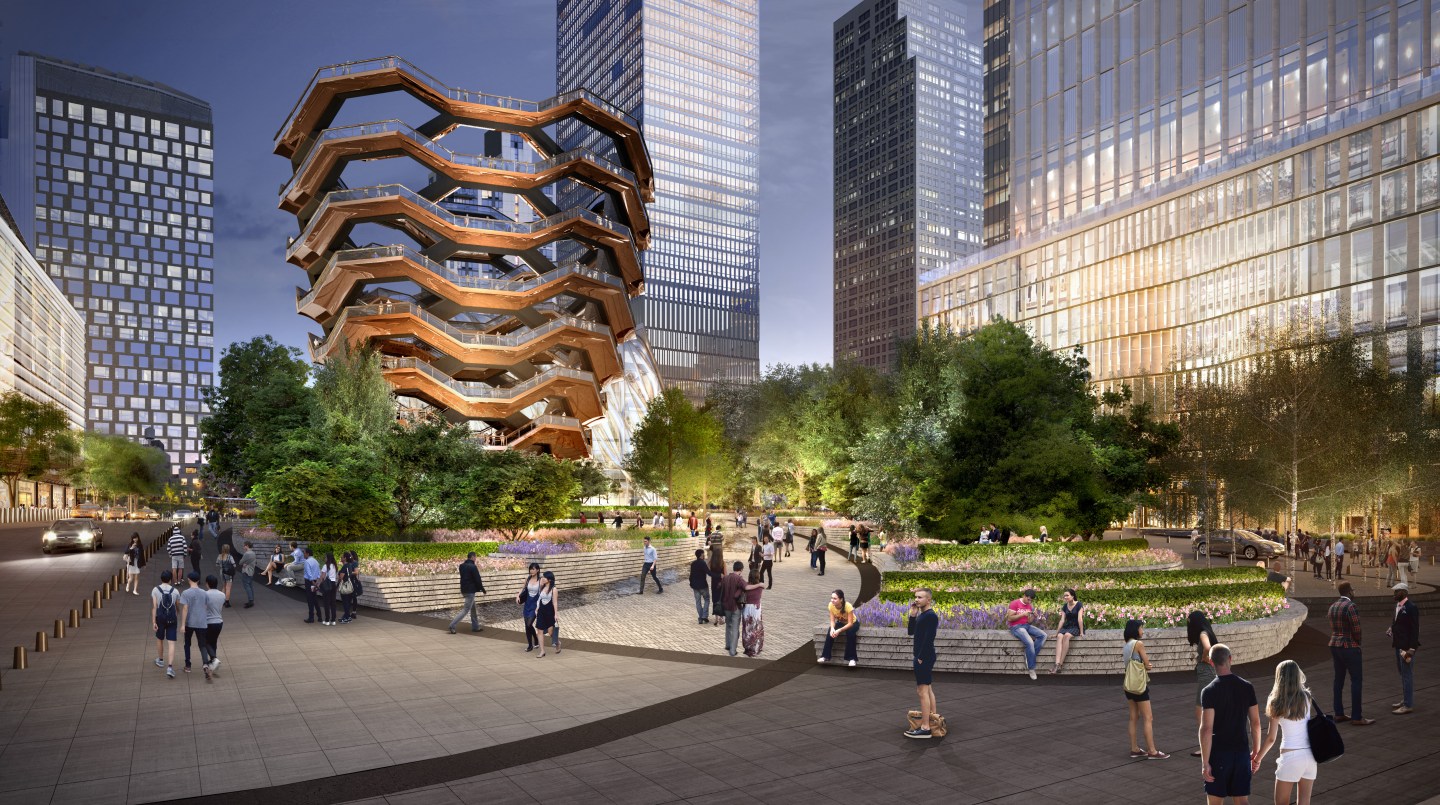 It was perhaps the greatest mystery in the world of urban design–what exactly was the great monument that Stephen Ross pledged to plant in the gigantic public plaza of the Hudson Yards? For years, it was well known that Ross, founder and chairman of the Related Companies, was auditioning almost a dozen of the world’s top sculptors and designers for the job, a list rumored to include Maya Lin, Richard Serra, Jeff Koons, and Zaha Hadid. And Ross himself was promising a one-of-a-kind spectacular that would dwarf any public monument Manhattan had welcomed in decades, and reign as an irresistible magnet for tourists from around the globe.

At 11:30 a.m. on September 14 (the precise time this story first appeared), Ross unveiled the plans for the project at an extravaganza in at a nearby park attended by New York Mayor Bill de Blasio, and featuring a dance performance conceived for the occasion by the Alvin Ailey troupe. The drawings and models display something on a scale exceeding, in cost, size and engineering complexity, any public monument furnished by a private developer in modern times.

As it turns out, the work isn’t a sculpture as you might expect, but a towering, bowl-shaped lattice of circular staircases designed by Britain’s Thomas Heatherwick, a specialist in big public installations who created the famous flaming cauldron that symbolized the 2012 London Olympics, and is helping design the reimagined Google campus in Silicon Valley. The structure, named “Vessel” by Heatherwick, fans out from a relatively small base like a Grecian urn, ascending 150 feet or the equivalent of 15 stories, its polished, copper-colored stainless steel skin reflecting the images of the folks strolling in the plaza below. If all goes as planned, it’ll open to the public in late 2018.

It’s not just meant to be ogled, but trod upon. “Vessel” is a sort of a towering jungle gym. Young and old alike will climb 2,500 steps over 154 flights of stairs, connected by 80 landings festooned with benches from which visitors can enjoy Hudson River views. Visitors will walk a full mile when making the round trip from the plaza to the summit and back. The cost, fully paid by the developers: $200 million.

“I wanted to commission something transformational, monumental!” Ross told this reporter during an interview in August, where he provided a preview of “Vessel,” on the condition that the information be embargoed until the September 14 debut. “I wanted something that defines a city like the Eiffel Tower in Paris or the Saint Louis Gateway Arch. In December, everyone who comes to Manhattan wants to visit the Christmas Tree in Rockefeller Center. This will be the equivalent of the Christmas tree twelve months a year.”

A monument for a massive development

Ross clearly sought an iconic centerpiece that would burnish the brand, and draw businesses, to the Hudson Yards. The development, set on 28 acres above the sprawling underground railyards along the Hudson on Manhattan’s West Side, where the trains from Penn Station are parked between trips, is the largest private real estate project in U.S. history. It encompasses 20 million square feet of offices, stores, apartments, schools, and hotels. The $25 billion development has greatly benefited from two of Manhattan’s biggest public works: The elevated High Line park that extends from the Whitney Museum in the south right to the Hudson Yards entrance on at 30th Street and 10th Avenue; and the $2 billion extension of the number 7 subway, which now connects the once remote, blighted area to Penn Station.

An artist’s rendering of the interior of “Vessel.” Visitors will be able to ascend 2,500 steps to panoramic views from a height of 15 stories.Courtesy of Forbes Massie–Heatherwick Studio

Its first tower, 10 Hudson Yards, is now mostly finished, and serves as world headquarters for Coach (COH) and the U.S. base for L’Oreal (LOREAL-S-A) of France. It’s the first of what will eventually be four skyscrapers, a retail complex, and an artistic center called The Shed that will surround the five-acre plaza, the setting for “Vessel.” Each of the skyscrapers and the Shed is designed by a celebrated architect, a roster boasting Kevin Roche, Elizabeth Diller, David Childs, David Rockwell, and Bill Pedersen. Most of those towers, including the new Time Warner building designed by Pedersen, will be completed by the time “Vessel” opens to the public.

During our conversation in a conference room at Related’s offices in the Time Warner Center, Ross’s signature creation prior to the Hudson Yards, the 76-year old billionaire described how he conceived, and defended, such an epic installation. It’s clear that Ross, who also owns the Miami Dolphins football franchise, prides himself on deploying showmanship as skillfully as struts and concrete. The central lobby of his Time Warner Center, for example, may be best known for its two enormous nude sculptures by Fernando Botero (irresistible, but unclimbable). “I wanted to brand the Hudson Yards as ‘the heart of the city.’ We even trademarked that name,” says Ross. “And it had to be something that would endure as monument for hundreds of years.”

Then, Ross pulled a key from his suit pocket. “This is the only key that exists to the drawer with the original plans from Heatherwick,” he said, “And there’s just one copy of the original plan. No one but me can get to it.”

With that introduction, he unlocked the bottom drawer of a credenza and pulled out a dog-eared presentation book. “It was a total secret,” he says. “The only people I showed this to were the CEOs of the companies thinking of coming to Hudson Yards, people like Bill McDermott of SAP, and Henry Kravis of KKR. They all appreciated that we were providing all this open space and an iconic installation that they’re employees would love. It was a great vehicle for selling and renting the office space, which is the key to the success of the entire project.”

Ross guided me through the well-worn presentation, which included images from Busby Berkeley musicals and pictures of step wells–networks of staircases extending into deep walled, underground structures in India. Heatherwick, he says, brought the presentation to Ross’ office in the winter of 2013. At that point, Ross felt the plans for sculptures he’d been seeing from numerous big names just weren’t different enough. “They were all typical of their past works,” he says. “I knew this couldn’t just be another yawner sculpture. When I saw Heatherwick’s plan, I thought, ‘This is excitement.’ The objective was not mainly art after all, it was too big, expansive and unique to be a sculpture.”

Ross’ partners at Related–one of America’s largest private developers–were less than thrilled about spending $200 million on a non-revenue-producing giant matrix of staircases when they were striving to fill thousands of square feet with tenants. “People told me I was nuts! They didn’t get it!” says Ross. “I fought with everybody to get it done! No on has ever given a gift like this.” He finally succeeded in getting his partners to agree. Everyone was relieved when he dropped “The Social Climber” as his initial, somewhat tongue-in-cheek name for the installation.

“Vessel” presents awesome engineering challenges. It’s being manufactured in immense modular units at a shipyard in Italy. The units have already started to be transported to New York by ship; when shipments arrive, sections of the West Side Highway will close in early morning hours to make room for the giant vehicles that transport the pieces, which Ross describes as resembling “giant dog bones,” to the site.

Prior to seeing Ross, I interviewed Heatherwick in offices at 10 Hudson Yards overlooking the plaza where his work will rise over the next two years. “We were dealing with a plaza twice the size of Trafalgar Square,” he remarked. “New York has a fitness thing. I was amazed that Ross climbs hundreds of stairs once a week to his apartment in the Time Warner Center. The idea was to make a vessel of stairs and landings, and create gathering points on the way up.” Instead of flights of stairs going into the ground as in the Indian step wells, these steps would lift folks to enjoy panoramic views, and appreciate the majesty of Manhattan.

Ross has been a master developer for decades. We’ll soon see if the multitudes will come and climb, proving he’s a master showman as well.