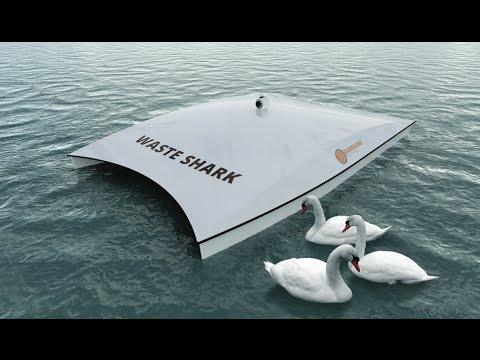 At last weekend’s World Port Days conference, the Port of Rotterdam debuted a pair of aquatic drones to help the port operate more efficiently and cleanly. One is the Waste Shark, an autonomous vessel to gather waste from the port’s busy waters before it can be washed out to sea. The other is the Aquasmart XL, a remotely operated craft equipped with a camera, making visual inspection of infrastructure safer and more efficient.

According to Silicon Angle, The Waste Shark can gather up to 500 kilograms of waste, or 1120 pounds, before returning it to a collection point. The vessel also gathers data about water quality, and designs more efficient collection routes as it learns over time. According to Port Technology, four Waste Sharks will be tested at the Port of Rotterdam for the next six months.

The craft, developed by RanMarine, could help curb the mounting environmental threat of ocean waste. Last year, there were an estimated 5.25 trillion pieces of plastic debris in the ocean, with 269,000 tons floating on the surface—and doing serious harm to ocean life.

But waste is also a problem for port operations, and RanMarine founder Richard Hardiman has said he was at least as interested in making port operations efficient as in tackling a broader environmental challenge.

That’s in line with the broader vision of the Port of Rotterdam, which in addition to being Europe’s largest port, is arguably the world’s most technologically advanced. That mindset has made waves, with unions striking in 2015 to protect jobs against accelerating automation.

Rotterdam’s other new drone, the Aquasmart XL, is itself designed to create more labor efficiencies. Its manufacturer touts its ability to save time and reduce cost—but also, much like aerial inspection drones, to reach areas inaccessible by traditional means.

For more on ports and shipping, watch our video:

Both craft were developed with help from PortXL, an accelerator focused on port technology.