When Fluffy’s Surgery Costs More Than a Car 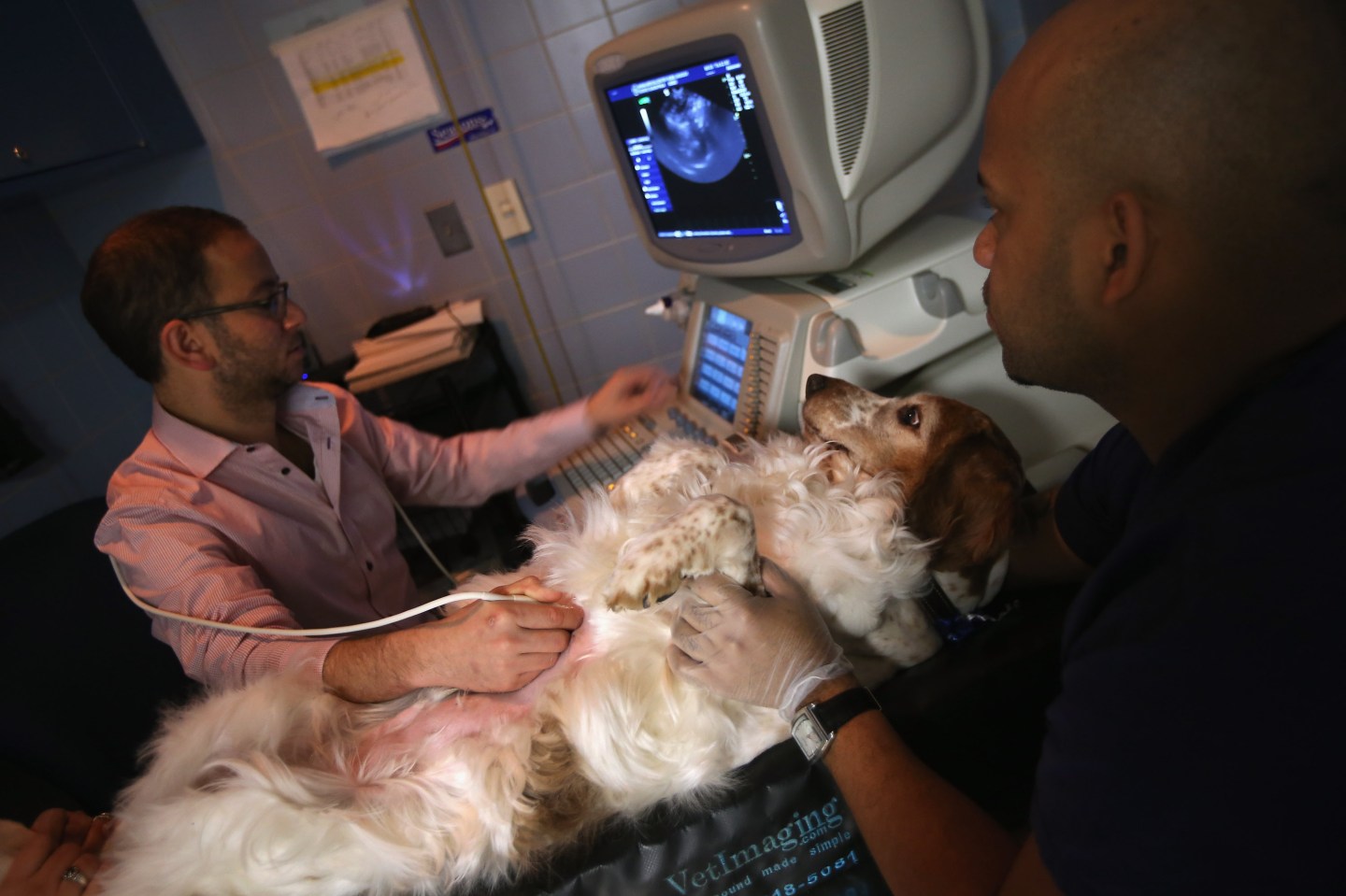 NEW YORK, NY - DECEMBER 12: Radiologist Anthony Fischetti gives an ultrasound to a sick dog at the Animal Medical Center on December 12, 2012 in New York City. The non-profit Animal Medical Center, established in 1910, has 80 veterinarians in 17 specialty services that treat up to 40,000 animal visits annually. Clients bring in their pets from around the country and world to the teaching hospital on Manhattan's Upper East Side for specialized high tech treatment. The American Pet Products Association estimates that Americans would spend more than $50 billion on their pets in 2012, $14 billion of that in veterinary care alone. (Photo by John Moore/Getty Images)
John Moore -- Getty Images

Last year, Mary Atwater-Kellman discovered her adopted pug Emoji had melanoma on his lip. He was 11, old for a dog, but she couldn’t bear to part with him. So she paid for chemotherapy treatment. Since then, more health issues have emerged, including a bout with pneumonia and a hospital visit for gallbladder and liver problems. Altogether, she estimates she’s spent more than $30,000 on his medical care.

While she was able to borrow the money from her parents instead of taking out a loan, she’ll never forget the sinking feeling when “you’re told the bill total is over $5,000,” a sum that covered just one procedure. Since then she’s cut back on non-essential spending, including dinners with friends. It hasn’t been easy — “it’s a whole concept of FOMO, of not being very social,” she says — but to her, Emoji’s life is worth it.

When it comes to opening the wallet, love is a powerful of motivator. “How much would you spend to save your child’s life?” is a cruel and impossible question. There isn’t a limit. For pets, that’s typically not the case. There’s even a term for it: stop treatment point, i.e. the amount people will spend on veterinary services before they decide it’s too expensive and make the decision to euthanize. Veterinarians track this number, which was $1,704 in 2012, up from $961 in 2003.

That the term exists at all creates a sharp separation between pets and children. For most people, anyway. For a growing number of owners, that distinction is less discernable. Sometimes, it’s nonexistent. “I’ve had clients say they love their animal more than their children,” says Dr. Allyson Berent, the director of interventional endoscopy at the Animal Medical Center, a veterinary hospital in New York that offers physical therapy, radiation, chemotherapy neurology, dermatology, and cardiology services, among others.

As a nation, we’ve started to recast pets as family members. Decades ago, medical facilities like the Animal Medical Center, which opened at its current location in 1962, were a rarity. Today, they’re sprinkled across the U.S. There’s the Chesapeake Veterinary Surgical Specialists in Annapolis, Maryland, the Angell Animal Medical Center in Boston, and the VCA West Los Angeles Animal Hospital, all of which offer a level of treatment comparable to human medicine.

For previous generations of owners, when a pet received a life-threatening diagnosis, the next step was painful, but preordained: Euthanasia. While devastating, the finality of the diagnosis provided closure. Today, when a pet is very sick, that’s when the decision-making starts.

At the Animal Medical Center, the outcome can be very expensive. Recently, an owner showed up with her 19-year-old cat, who had stopped producing urine. The fix, a subcutaneous ureteral bypass, cost around $10,000. When told the figure the woman, who owns 15-plus cats and is a regular at the Center, “didn’t even blink an eye,” says Dr. Berent. “She would never say no for something for her cats unless they were suffering. She has three kids, but these are like her kids — she’ll do anything for them.”

For a small, lucky percentage of the population, dropping thousands of dollars on advanced, complex veterinary procedure isn’t a problem. But for the rest of us, this standard of care goes hand-in-hand with bankruptcy.

For humans medical costs there’s a solution, if an imperfect one: Health insurance, in which the bulk of medical expenses are passed on to insurers. As pet health care continues to track human health care, some owners have decided the same equation makes financial sense.

That’s the message Rusty Sproat, the founder and CEO of Figo Pet Insurance, a cloud–based pet health care insurance startup aimed at millennials, is pushing. The company’s plans, which cost between $25 and $30 a month, offer deductibles from $50 to $500 and reimbursements from 70% to 100%.

After her experience with Emoji, Atwater-Kellman purchased an insurance plan for her 3-year-old pug, Inky. For $42 a month, her insurance covers 80% of medical costs after a $250 deductible (although the plan likely wouldn’t extend to experimental procedures, such as the ones Dr. Berent performs). Because Inky is young and healthy, she struggles to reach the deductible, but after her experience with Emoji, the peace of mind is worth cost.

She’s still in the extreme minority. (Only 1-2% of the total U.S. pet population was insured last year, according to the North American Pet Insurance Association, a trade group.) But as costs continues to increase — Americans spent a record $15.4 billion on vet services last year, up from $8.6 billion in 2005 — that will likely change, says Bob Vetere, president and CEO of the American Pet Product Association. Each time someone writes an enormous check so Fluffy can live another day, the opportunity builds: “People are still getting used to the idea, but when a special need comes up, they’re all for it.”

After all, many owners now demand the same level of care for their pets as their families, says Dr. Chick Weisse, a staff surgeon and head of interventional radiology at the Animal Medical Center. He regularly hears variations of, “My aunt had this procedure, why can’t my dog?” To meet this demand, veterinarians and human surgeons have started to collaborate on new, expensive procedures, teaching one another relevant techniques. Drs. Berent and Weisse are coached by an interventionist from NYU Langone, while the hospital’s department of neurology works with doctors from Weill Cornell Medicine.

For Harold Herzog, a professor of psychology at Western Carolina University who has spent his career studying our relationship with animals, all of this raises important questions: How do we determine when the most compassionate response isn’t a complicated procedure, but to let the animal die a painless, unprolonged death? And more broadly, is it right to treat animals as if they were people?

Three years ago Shirley Hao created an account for Tibby, her Corgi, on which she posts and captions photos from her dog’s perspective. But even for Hao, who actively engages in anthropomorphism online, the societal shift to treat pets as if they were humans can be unsettling.“In the back of my mind, I’m always like ‘but she’s just a dog,” she says. “I love her, but she’s just a dog.’”