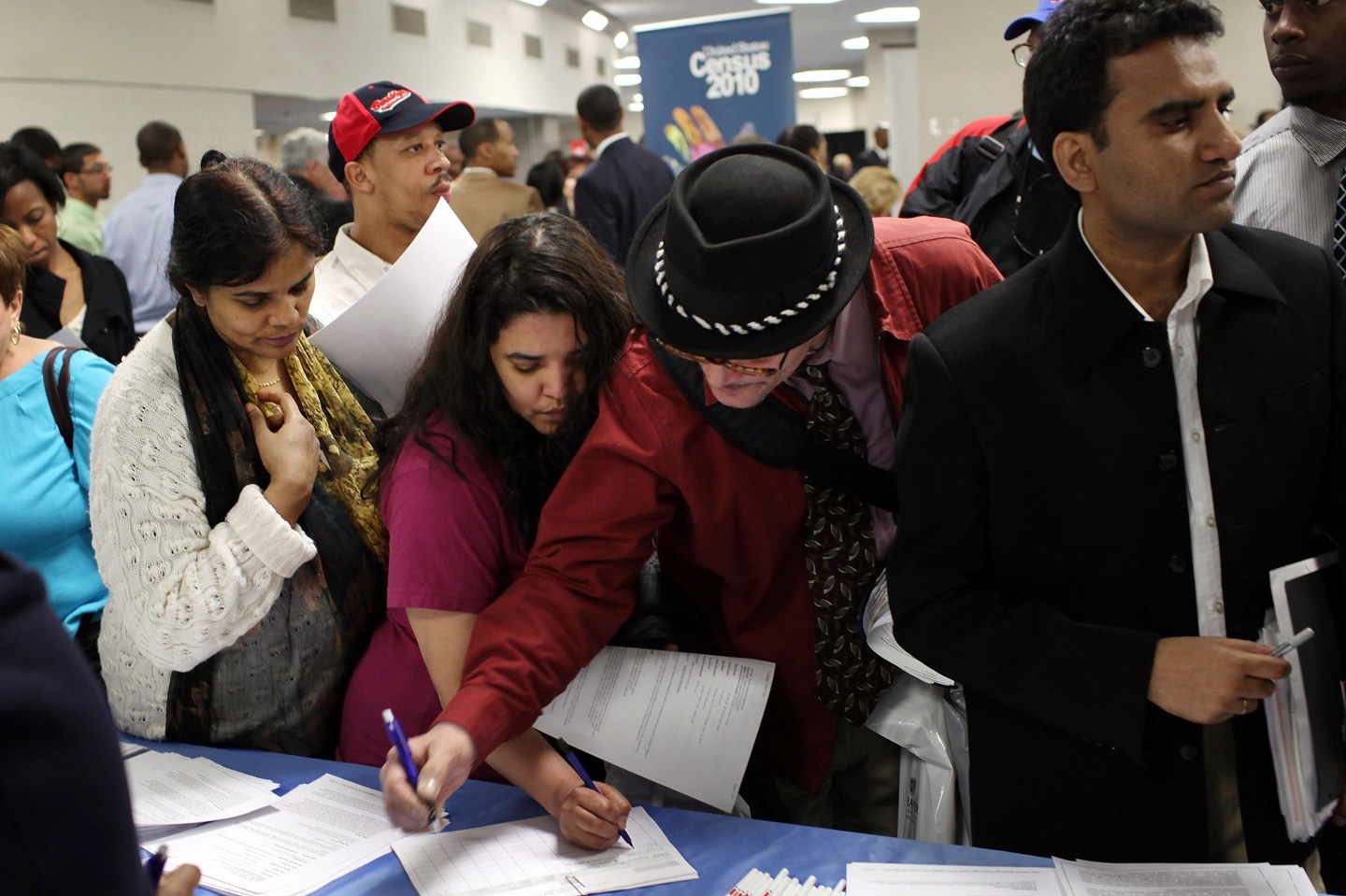 People looking for employment attend an AARP job fair with an emphasis on individuals 50 years old and over on April 12, 2010 in New York City. The job fair featured employer booths and seminars on resume writing and the development of computer skills. Despite the Dow Jones Industrial Average surpassing 11,000 today for the first time since September 2008, the nation's economy is still struggling as unemployment is hovering near 10 percent.
Photograph by Spencer Platt—Getty Images

Six years after the Great Recession ended, jobless older workers are the forgotten story of the economic recovery. U.S. employers are creating hundreds of thousands of new jobs every month, but millions of older workers who want a job cannot find work.

The economic data documenting the problem is clear. So is one of the most important causes: age discrimination.

Consider the government jobs report released late last week. On the surface, job growth look is looking solid—the national jobless rate in August was unchanged at 4.9%, and 151,000 new jobs were created. More than 270,000 new jobs were added in each of the previous two months.

The jobless rate for workers over 55 was even lower, at just 3.5%. But that figure is deceptive. If you add in workers holding part-time jobs who would rather be working full time, and unemployed workers who have recently given up on seeking work, the jobless rate for older workers last month was 8.7%, according to analysis of the government figures by the Schwartz Center for Economic Policy Analysis (SCEPA) at the New School.

Further, if you add jobless workers who gave up looking after more than four weeks, the 55-plus unemployment rate is a whopping 12%, SCEPA analysis shows. Looked at another way, 2.5 million older Americans want a job but do not have one.

Age discrimination is illegal under the Age Discrimination in Employment Act of 1967. The law prohibits treating job applicants or employees who are over age 40 less favorably because of age. (The law applies to employers with 20 or more workers.) But most of the complaints filed with the U.S. Equal Employment Opportunity Commission focus on age-bias terminations rather than hiring—simply because hiring discrimination is so difficult to prove.

Yet two-thirds of older workers believe age discrimination occurs in the workplace, according to a 2013 survey by AARP. Older job seekers need much more time to find a job than older workers—36 weeks in 2015, compared with 26 weeks for younger workers, SCEPA data shows.

The Evidence on Discrimination

A recent study by economists at the University of California at Irvine and Tulane University found strong evidence of age discrimination in hiring, particularly for older women. The researchers sent out 40,000 dummy job applications that included signals on the job-seekers’ ages, and then monitored the response rates. They measured callback rates for various occupations; workers age 49-51 applying for administrative positions had a callback rate 29% lower than younger workers, and it was 47% lower for workers over age 64.

Other studies suggest that the long-term jobless rate for women over age 55 is several percentage points higher than it is for men.

But older men are struggling too—especially white males with less education. This shows up in government numbers on job tenure, according to Teresa Ghilarducci, a labor economist and SCEPA’s director. From 2012 to 2014, median job tenure with a current employer for white males age 55 and older with less education (high school or less) decreased to 16.7 years from 17.7 years, while job tenure for all other groups rose. “The people who are losing the most are white, high school-educated men,” she said.

If demand for labor continues to grow, older workers should start to see more opportunity as employers become less picky about whom they want to hire. But that will not happen until wages rise significantly – something that has yet to occur in the current recovery, according to Ghilarducci.

“Economists have been surprised by the increasingly weak relationship between wages and low unemployment,” she said. Indeed, in July, 29% of older full-time workers age 55-64 were in what Ghilarducci calls “bad jobs.” That means they were earning less than two-thirds of the median wage for workers in that age range.

She adds that when older displaced workers do find new jobs, they typically go back to work with about 75% of their former pay.

These income disruptions play havoc with retirement plans. Nearly half of current retirees retire earlier than planned, according to survey research by the Employee Benefit Research Institute. And 60% of older workers who experience involuntary job loss end up retiring involuntarily, according to the Center for Retirement Research at Boston College.

Lost income in the decade leading to retirement can cut into future Social Security earnings by reducing the credits used to calculate a worker’s benefits. It also can force workers to file for benefits early, sharply reducing lifetime benefits. The ramp-up to retirement also gives some workers – especially empty nesters – a chance to catch up on retirement saving, but that does not happen when income from work stops. If anything, jobless older workers are more likely to crack open their nest eggs early.

What to do about age discrimination? The problem begs for a mass movement response, argues Ashton Applewhite, author of This Chair Rocks: A Manifesto Against Ageism (Networked Books, March 2016). “We need something like the women’s movement, which made people aware that things they thought were their own personal problems – like being perceived as incompetent or being paid less—actually were widely shared political problems that required collective action.”

A movement to fight age bias would not just help today’s older workers, she adds—it will help younger workers, too. “Confronting ageism means making friends of all ages, and pointing out bias when you encounter it—like, when everyone at a meeting is the same age. It means joining forces across age groups – not seeing older people as alien and ‘other,’ but as us—our own future.”