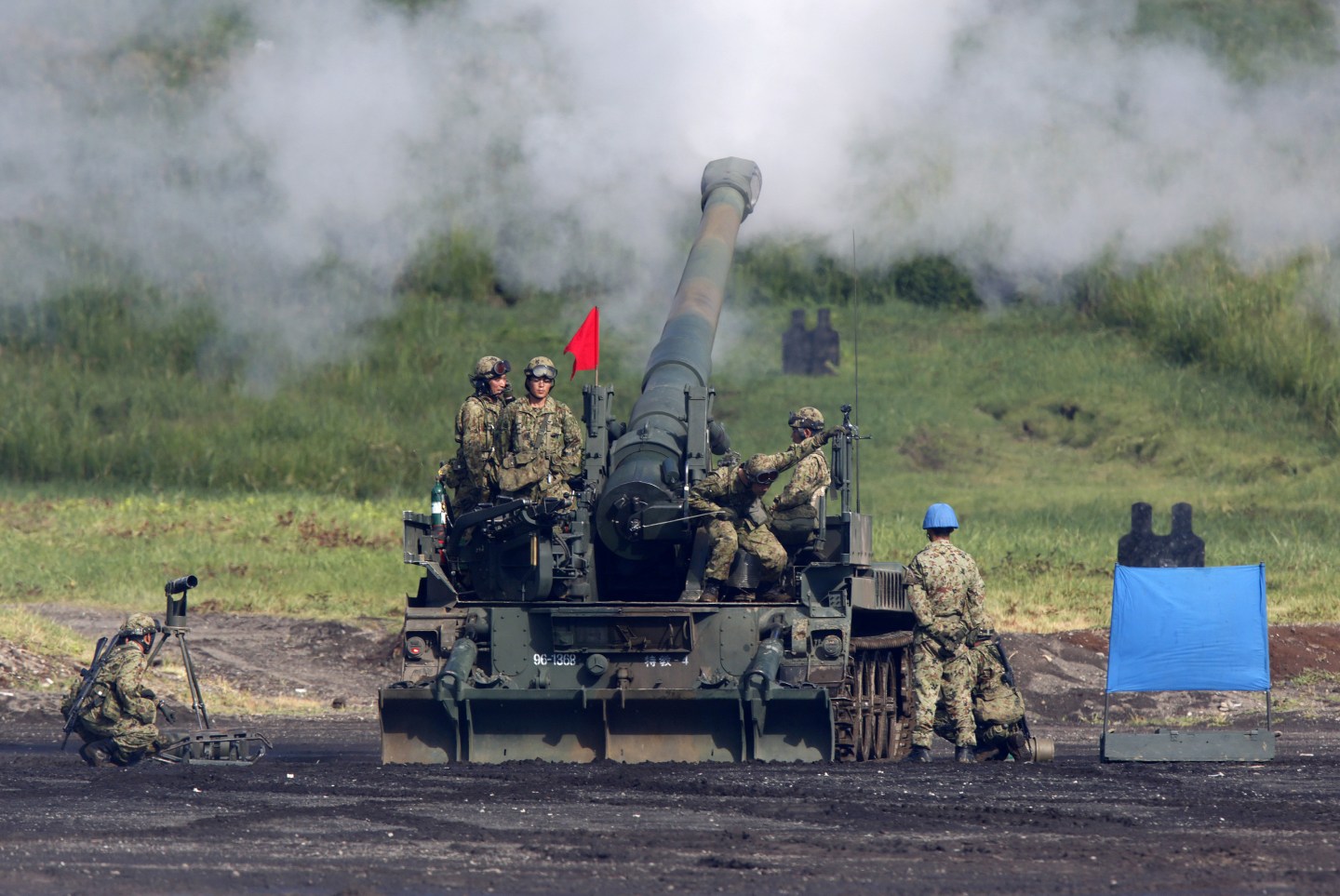 Members of the Japan Ground Self-Defense Force (JGSDF) fire a 120mm mortar during a live fire exercise at the foot of Mount Fuji in the Hataoka district of the East Fuji Maneuver Area in Gotemba, Shizuoka Prefecture, Japan, on Thursday, Aug. 25, 2016. In a further shift in Japan's pacifist postwar security policy, the military will begin training to carry out new missions overseas. Photographer: Tomohiro Ohsumi/Bloomberg via Getty Images
Tomohiro Ohsumi/Bloomberg via Getty Images

Japan’s defense ministry on Wednesday asked for a hike in spending to record levels, as it juggles its responses to a growing ballistic missile threat from North Korea and China’s assertive moves in the East China Sea.

If approved, the hike of 2.3% will take the defense budget to 5.17 trillion yen ($51.47 billion) in the year starting April 1, for a fifth consecutive increase as Prime Minister Shinzo Abe bolsters Japan’s military.

The nation’s Self Defense Forces are pivoting away from guarding the north against a diminished Russian threat to reinforce an island chain stretching 1,400 km (870 miles) along the southern edge of the East China Sea.

That means opting for fewer tank divisions as they build a mobile amphibious force from scratch.

The costly rejig comes as Japan is also forced to spend more to guard against ballistic missiles being developed by North Korea capable of striking most areas.

See also: This Defense Contractor Is Seeing a Considerable Rise in Earnings

The improvements will double their range to around 30 km (19 miles) and sharpen targeting to hit arriving ballistic warheads.

They will take five years to complete, with the first four enhanced Patriots expected to be ready for the 2020 Tokyo Olympics.

The budget request also includes funding to improve Aegis destroyers that are Japan’s first line of defense against ballistic missiles.

Japan and the United States are developing a new warhead killer, the Standard Missile 3 (SM-3), to destroy targets in space, but no decision on a full rollout has yet been made.

Other proposed defense buys will reinforce the East China Sea, where Japan and China are locked in a territorial dispute over a group of islets 220 km (140 miles) northeast of Taiwan known as the Senkakus in Tokyo and the Diaoyus in Beijing.

Japanese air scrambles against Chinese aircraft are running at a record high, with Beijing’s navy probing deeper and more frequently into the Western Pacific beyond Japan’s island chain.

See also: Why the Pentagon Is Reviewing an Unfinished Aircraft Carrier

Other buys will include a Northrop Grumman unmanned Global Hawk surveillance drone and a new larger-class diesel-electric submarine designed by Mitsubishi Heavy and Kawasaki Heavy.