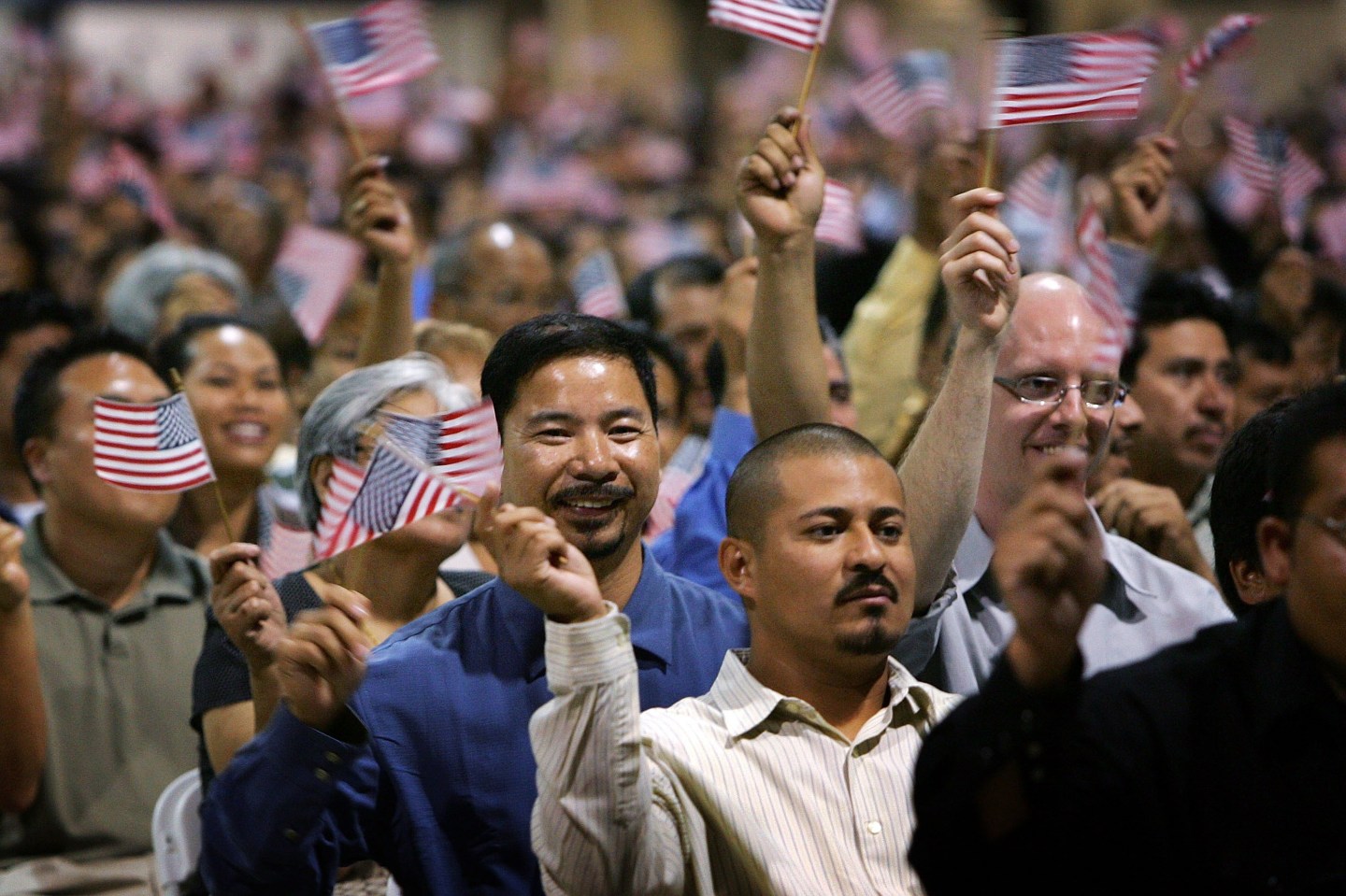 POMONA, CA - JULY 26: Immigrants wave flags after being sworn in as U.S. citizens in naturalization ceremonies on July 26, 2007 in Pomona, California. Some of the 6,000 people taking their citizenship oath are part of a flood of immigrants trying to beat a July 30 deadline when the cost of becoming a citizen goes up. First-time green card will go from $325 to $1,010, temporary resident status will increase from $255 to $710, and naturalization will cost $300 more. To meet the flood of immigrant applications, immigration offices had to extend their office hours. (Photo by David McNew/Getty Images)
Photograph by David McNew — Getty Images

Donald Trump is set to deliver a speech Wednesday night that his campaign claims will clear up confusion caused by days of apparent whipsawing by the Republican nominee on his immigration plans.

But the address, combined with Trump’s abruptly scheduled meeting Wednesday with Mexican President Enrique Peña Nieto, is largely a distraction from the real immigration policy debate.

When the smoke settles on the 2016 presidential election, no matter who wins, the Republican Party will confront the same dilemma it struggled with in 2013 and 2007, when comprehensive immigration reform proposals left the GOP caught between friendly business groups backing reform and strongly opposed voters in the conservative base.

House Republicans still have to manage deep red districts where the main threat of defeat comes form primary challenges and support for “amnesty” is the easiest way to get one. They’ll also have to consider the decreasing odds the party can win the White House without improving its appeal among Latino voters.

“The definition of insanity is doing the same thing over and over again and hoping for a different result,” said Lynn Tramonte, the deputy director of America’s Voice, a group that backs immigration reform. “They can take a very short-term view, block reform next year, and worry about the next cycle, but they’ll be ignoring crucial changes happening around the country.”

Trump’s supposed softening on immigration was hardly a policy shift, because his proposals—particularly his vow to deport more than 11 million undocumented immigrants and to force Mexico to fund a wall along the entire southern border—are not feasible policies. They are rhetorical appeals to alienated conservative voters.

By acknowledging the difficulty of removing every undocumented immigrant and letting surrogates suggest his vaunted border wall will be in part virtual, Trump inched toward proposals included in the so-called Gang of Eight immigration plan passed by the Senate but ignored by the House in 2013.

Trump is not going to turn into an advocate for comprehensive immigration reform on Wednesday, as shown by his camp’s recent insistence he is not weakening his signature positions. But his waffling suggests that reality will push any president hoping to pass immigration legislation toward the general outline of comprehensive plans backed by both President Obama and George W. Bush.

The Gang of Eight plan reflected a deal between the U.S. Chamber of Commerce and the AFL-CIO on a visa program for low skilled workers. Agricultural groups backed a guest laborer program in the bill. Tech companies supported a provision making it easier to hire skilled foreigners. Those deals vested industries in the passage of a comprehensive immigration bill. The same groups stand ready to back a similar bill next year. Labor, business or agriculture groups would become formidable opponents of a plan they were left out of.

Hillary Clinton says she will present Congress with a comprehensive immigration plan during her first 100 days in office. With forecasting models giving the former Secretary of State 75% or better odds of becoming the next president, the focus on Trump’s plans seems like a distraction from Clinton’s. With relatively little scrutiny, she has outlined strongly progressive immigration proposals, such as allowing undocumented immigrants to buy Obamacare.

A Clinton win could be accompanied by Democrats recapturing control of the Senate, because her margin would boost chances Democratic candidates win key Senate contests. With New York Democrat Chuck Schumer, the lead proponent of the 2013 immigration bill, installed as Majority Leader, Democrats would start 2017 well-positioned to push a bill through the Senate.

If Republicans still control the House, the most likely scenario, Speaker Paul Ryan could quickly find himself where former Speaker John Boehner was in 2013: under pressure from conservative voters opposed to any immigration plan that provides a path to citizenship for undocumented immigrants, but pressed by the political need to broaden the party’s electoral appeal. Ryan has signaled openness to tackling immigration reform under the next president, but might lack power to force his party to go along.

Lobbying and dollars from supportive groups would play an important role in any effort to round up GOP votes. A trade group of operators of facilities with federal contracts to house undocumented immigrants recently gave $45,000 to a fundraising committee supporting Trump. That is pennies compared to donations available from firms whose bottom lines stand to benefit from an immigration system that made it easier and cheaper to hire immigrants.

Republicans and business groups alike will feel rising pressure to act, Tramonte argues, lest Democrats eventually gain power to impose their own immigration reform preferences without compromising. For the large companies that make up the U.S. Chamber of Commerce, that would mean allowing labor to restrict the number of visas for unskilled workers.

“They don’t want to let the progressive movement dictate all the terms,” she said.