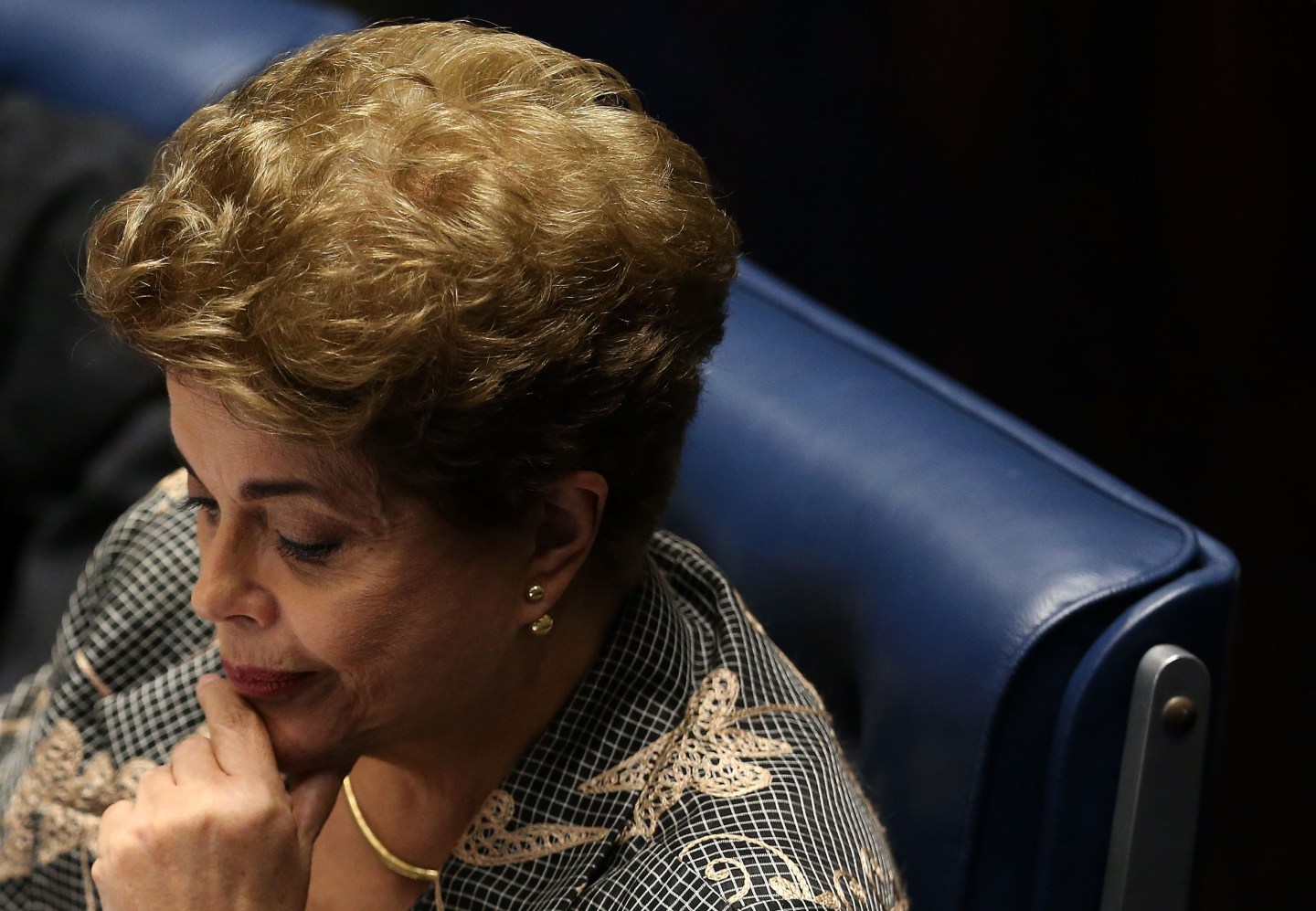 Nine months since the beginning of the proceedings in Congress, Brazil President Dilma Rousseff’s impeachment process reached its final mark. The highlight of the trial happened Monday, when Rousseff appeared at the senate floor to present her defense. While there was some discussion between government and opposition, Rousseff’s presence was somewhat lackluster. Her main proposal to appease senators—to call for a plebiscite on new elections, should she return to power—was rejected even by her own Workers’ Party.

With little to offer in exchange for an acquittal, the suspended president has embarked on a more aggressive defense strategy, referring to the impeachment process as a “parliamentary coup” as she sat beside Brazil’s chief justice. While this tone may resonate well with segments of public opinion, it will not be enough to tip the balance in her favor in the senate.

The senate, therefore, is just hours away from deciding whether or not to confirm what most pundits have been expecting for quite some time. The threshold to oust a president is two-thirds of the senate (54 votes), and support for impeachment in the upper chamber has only increased in recent months. The latest tally for tomorrow’s vote stands at 59-60. Chances are that, beginning in September, Brazil will finally have a new president in a permanent capacity. After Rousseff’s ouster, Vice President Michel Temer will be officially sworn in as president to complete Rousseff’s original term, which ends in 2018.

Will the impeachment solve months of acute political and economic turmoil in Brazil? The short answer: no. Against the backdrop of a less favorable global economy, a combination of deep recession, fiscal imbalance, ongoing corruption scandal, and the usual political bickering constitutes what many have called a perfect storm. While the end of a long impeachment trial will bring some respite, the incoming government will continue to face an uphill battle to put the country back on track.

On the economic front, there are two main challenges. The first is to get the country’s troubled finances in order. The end of the commodity super-cycle and several years of macroeconomic mismanagement have taken a toll in the government’s coffers. Any meaningful attempt to correct the course will require structural reforms to limit spending, curtail entitlements, and raise taxes. In addition to stoking an already disgruntled middle class, this unpopular agenda will face a high bar to clear a fragmented congress. Progress on this front, therefore, will be very piecemeal.

The second economic challenge will be to regain confidence from investors. During Rousseff’s five-year tenure as president, the hand of the state fell heavily on some sectors of the economy, leading to a number of policy distortions, if not outright incoherence. With little public funds at his disposal, Temer will need to resort to the private sector in order to increase investments and spur an economic recovery. Consequently, a much-needed boost in credibility will demand reforms to improve the business environment for investors. Energy and logistics infrastructure will be two sectors that will face positive changes in the coming months.

But all of this economic reform will happen in a very complicated political environment. The massive corruption scandal that has engulfed large swathes of Brazil’s political class and business elites in the last two-and-a-half years, the investigation known as Lava Jato (or Operation Car Wash), will continue to cast a shadow for the time being. But while an active and autonomous prosecutorial body will maintain the investigation alive for at least several more months, Temer is likely to survive. The lingering uncertainty, however, will make his life harder to project more credibility to investors and Brazil watchers more broadly.

Be it as it may, Temer will lead a transition government ahead of the 2018 presidential election. Whoever wins then will need to carry on with an ambitious reform agenda. If there is a silver lining, it’s that Brazil’s perfect storm may have started to clear. With the impeachment saga over and incipient signs of economic recovery, the worst of the country’s crisis appears to be in the past. A successful Olympic Games in Rio, after much concern, has also helped to boost morale. But for Temer, the real governing game will begin now.