Defective Helmets Made By Prisoners Put Combat Soldiers at Risk 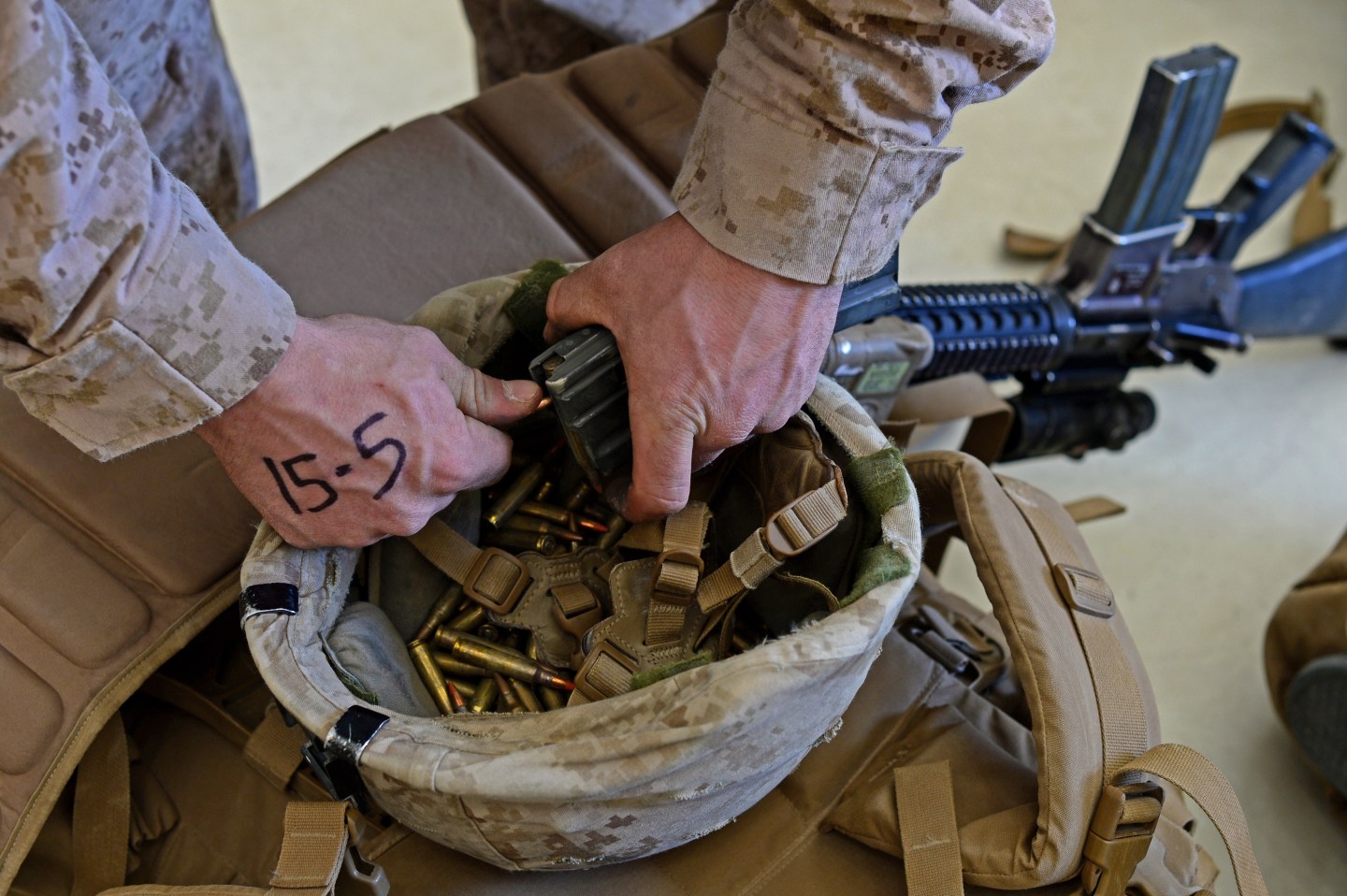 A US Marine unloads ammunition from a rifle magazine into his helmet after arriving in Kandahar on October 27, 2014, as British and US forces withdraw from the Camp Bastion-Leatherneck complex in Helmand province. British forces October 26 handed over formal control of their last base in Afghanistan to Afghan forces, ending combat operations in the country after 13 years which cost hundreds of lives. The Union Jack was lowered at Camp Bastion in the southern province of Helmand, while the Stars and Stripes came down at the adjacent Camp Leatherneck -- the last US Marine base in the country. AFP PHOTO/WAKIL KOHSAR (Photo credit should read WAKIL KOHSAR/AFP/Getty Images)
Photo by Wakil Kohsar—AFP via Getty Images

An investigation into government-owned company Federal Prison Industries has found that helmets it manufactured for the military are defective and pose a serious risk to the wearer.

FPI, which now operates under the name UNICOR, was established in the 1930s under an executive order as a way to provide inmates with experience so that they can more easily find a job once they’re released from prison. A report released by the Department of Justice revealed that the company produced these military helmets using subpar materials, poor manufacturing practices, and superficial quality control.

FPI received a contract worth more than $23 million from the Department of Defense in 2008, Foxtrot Alpha reports. The company only actually delivered 3,000 of the 23,000 Lightweight Marine Corps Helmets it had made, but eventually all of them had been quarantined after they were found to be defective. FPI had also been subcontracted by ArmorSource to make Advance Combat Helmets. Between 2006 and 2009 they made 126,052 helmets, all of which have been recalled.

According to the DOJ’s report, the helmets were “defective and not manufactured in accordance with contract specifications.” They had been produced using “degraded or unauthorized ballistic materials” and expired paint. The prisoners had created their own makeshift tools to make the combat helmets—utensils that resemble hatchets which they used to remove paint, and something that looks like a piece of wood with a screw sticking out, which was supposedly used to strip Kevlar. Not only are these tools incapable of producing safe helmets, but they could also contribute to a more dangerous prison environment.

Additionally, FPI’s quality control was essentially non-existent. The contract requires that inspections be randomized, but the company instead pre-selected helmets for review. The report also states that FPI staff requested that inmates alter documents to show that all inspections had been passed.

The DOJ writes in its report that the helmets would “likely cause serious injury or death to the wearer,” though it also added that it hasn’t seen any information indicating that anyone has been harmed as a result. The ArmorSource recall alone has cost the government upwards of $19 million. ArmorSource has agreed to pay $3 million, but there have been no criminal charges in connection with this investigation.

Fortune reported last week that the stocks of two prison real estate trusts have each plummeted by nearly 50% following news that the DOJ won’t renew contracts with prison operators, and may even cancel existing contracts.

Neither Federal Prison Industries nor the Department of Justice could immediately be reached for comment.