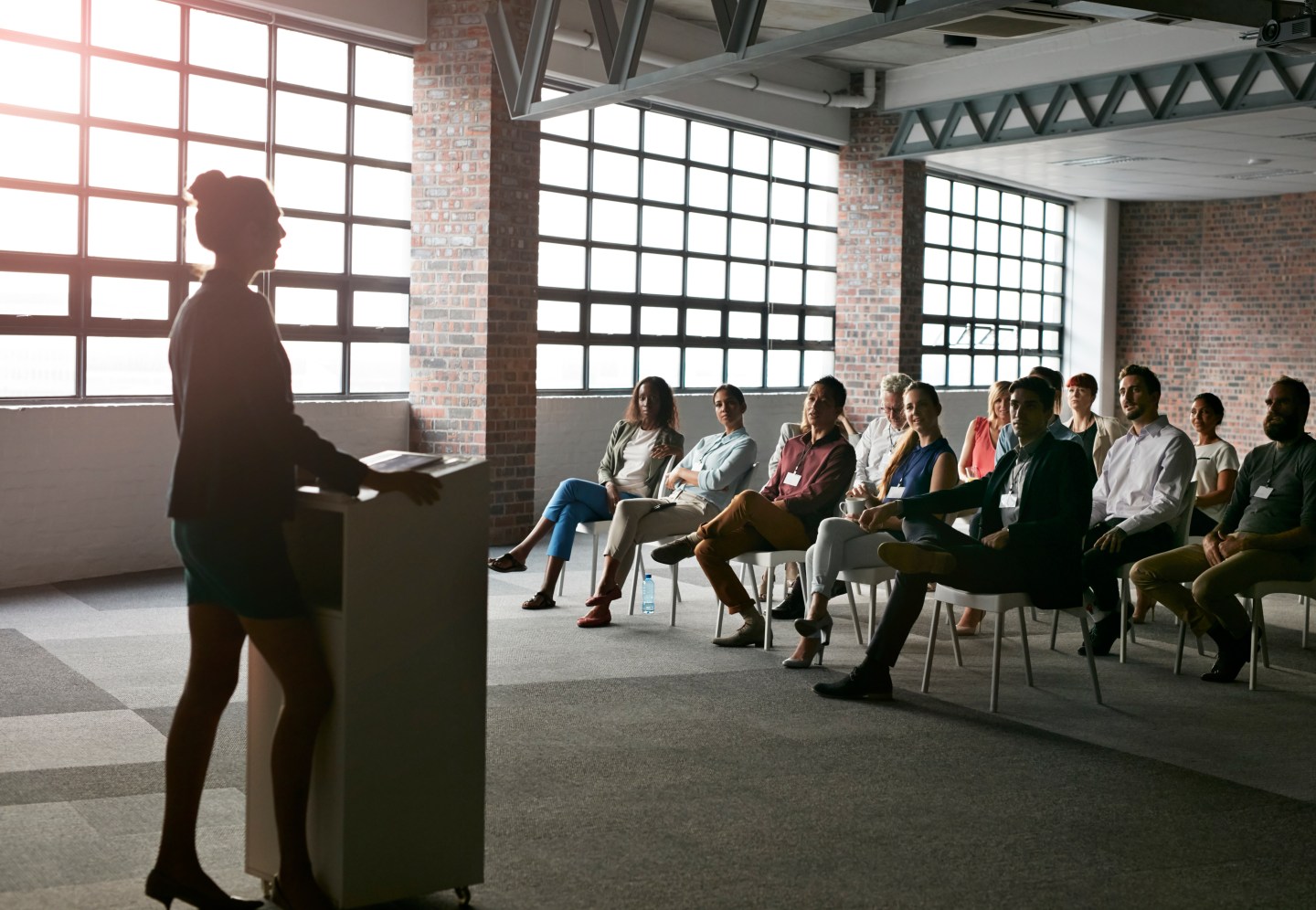 The MPW Insiders Network is an online community where the biggest names in business and beyond answer timely career and leadership questions. Today’s answer for: What’s the scariest work challenge you were faced with and how did you overcome it? is written by Liz Wiseman, president of The Wiseman Group.

We’re all familiar with that sinking feeling of being in over our heads or frozen with fear while staring at a monster challenge that seems impossible to conquer.

For me, the horror show began with a seemingly simple request. I was invited to speak at a business forum in Seoul celebrating the inauguration of President-elect Park Geun-hye, Korea’s first female head of state. The conference would be a gathering of Korea’s top business leaders, government dignitaries, and some power players in international economics. I was asked to give a presentation on “leadership for the future” based on one of my leadership books that had been recently released in Korean. Having done some research on the management challenges facing Korean businesses, this seemed easy enough. I accepted and booked my flight.

Two weeks before the forum, I began to smell trouble. I received a briefing document outlining the topics and questions I was to address. The list included issues ranging from national economic policy to government’s role in establishing new social structures. I completely panicked when I saw the question about diplomatic and economic relations with North Korea. Surely they had sent me another presenter’s brief by mistake.

See also: How an Intimidating Work Assignment Can Be Just the Career Boost You Need

The organizers assured me that this was no mistake, but I soon understood how the mix-up came about. The preface I wrote for the Korean edition of my book addressed a few economic issues—raising questions more than providing answers, really. I had simply made a couple of good points and was now being mistaken for an economist. If you’ve ever rattled off a few well-pronounced phrases in a foreign language and had someone mistakenly assume you were fluent, you know the predicament. Not only was I out of my league, I was in an entirely new game.

I had little choice but to scramble up this unexpected and steep learning curve and get smart fast. I spent the week consulting with experts and reading every report I could find on Korean economics and politics. I sorted through mounds of data and analysis until I understood the issues and developed a reasonable set of talking points. By the end of the week, I felt confident, even excited. But, just for good measure, I packed my two favorite suits—the ones that make me feel put-together, powerful, and capable of handling the toughest situations.

Upon arriving in Seoul, I received more distressing news. As I unpacked my suitcase, I caught a waft of an unpleasant odor—it was a foul, yet familiar smell. Imagine my horror when I remembered that, while packing, I had left my open suitcase unattended and in the vicinity of my bad cat, the one that thinks every rectangular, plastic object is a litter box.

There was no time for shopping, and no amount of dry cleaning would remove the stain. Calling in sick wasn’t an option, either. I reminded myself of something a former boss told me: “When you play in the big leagues, sometimes you have to play hurt.” So, I washed my dry-clean-only clothes in the hotel sink, and with injured pride, I left to meet with the dignitaries in a state you might call, “dressed to unimpress.”

I delivered my presentation, which was actually fairly good. During the panel discussion, I discovered that after my desperate and diligent preparation, the tough questions weren’t all that tough. And luckily, I wasn’t asked about North Korea, and no one brought up the cat pee issue, either (although some might have wondered).

From my reluctant and awkward foray into global economic policy, I learned two things: First, our true power comes from what’s in our heads, not what we’re wearing. So next time you’re feeling out of your league, look for your strength from within—even when you’re a hot mess on the outside.

Second, big, steep learning curves can be scaled, sometimes rather quickly. My research has shown that we are often at our very best when we know the least—when we’re newcomers and outsiders. Facing a daunting challenge can propel us into learning mode, where we not only do our best thinking, but also experience a sense of wonder and exhilaration, even a sense of joy. Rapid learning is especially critical now, because in fast times, it’s not what you know that matters. It’s how fast you can learn.