What Life is Like for the Children of War-Torn Aleppo 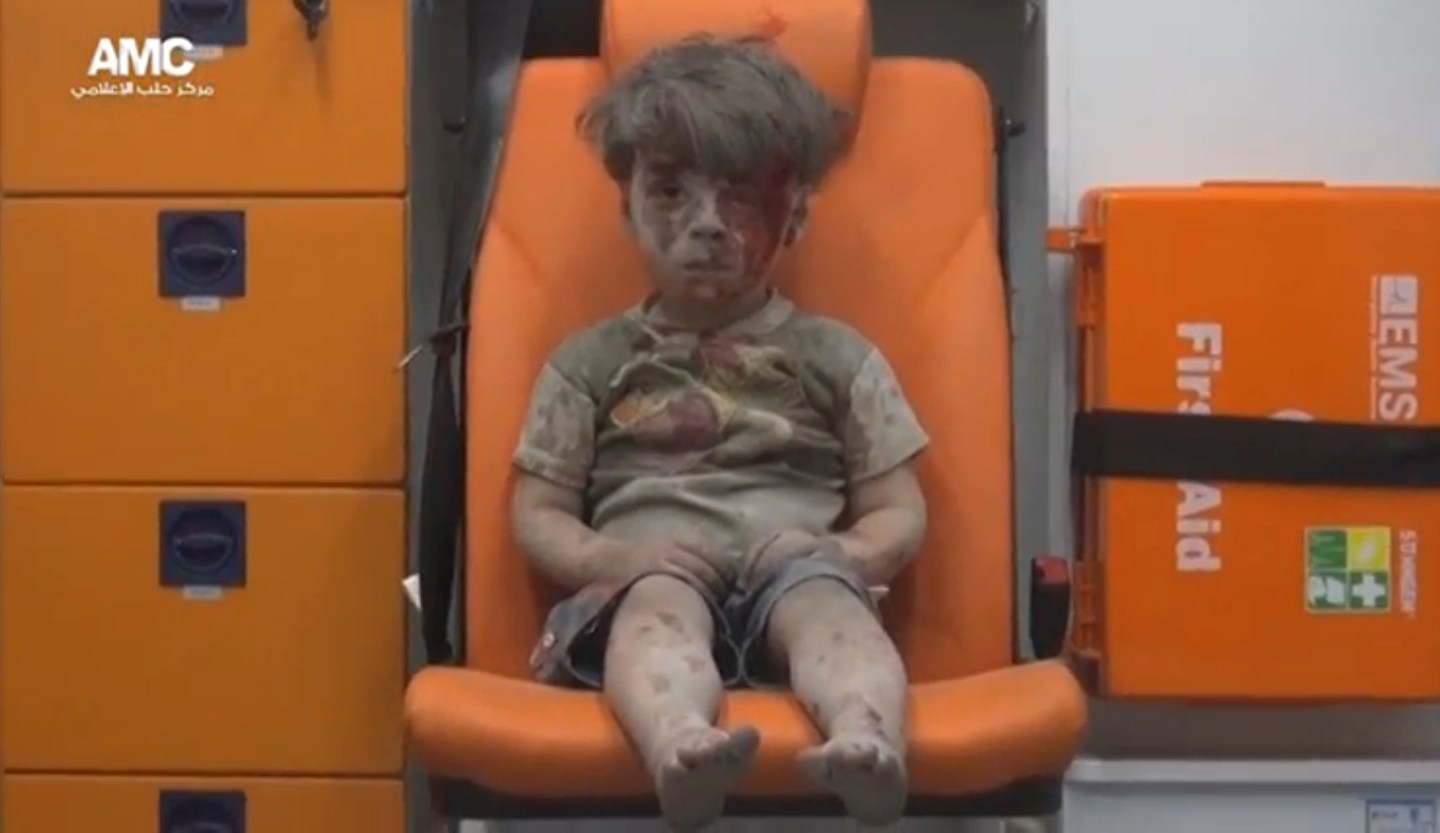 A still image taken on August 18, 2016 from a video posted on social media said to be shot in Aleppo on August 17, 2016, shows a boy with bloodied face sitting in an ambulance, after an airstrike, Syria. Social Media ATTENTION EDITORS - THIS IMAGE WAS PROVIDED BY A THIRD PARTY. EDITORIAL USE ONLY. NO RESALES. NO ARCHIVE. REUTERS IS UNABLE TO INDEPENDENTLY VERIFY THIS IMAGE. TPX IMAGES OF THE DAY - RTX2LPY8
Reuters

The bloodied, dust-covered face of Omran Daqneesh, the five-year-old Syrian boy recovered from the rubble left by an airstrike this week, has shocked the world.

Omran has become a symbol of the ongoing civil war in Syria, but he is just one of an estimated 75,000 children fighting to survive in eastern Aleppo, the divided and once-great city at the heart of the struggle between the regime of Bashar Assad and the rebels attempting to oust him.

The seizure in June of the Castello Road, the last remaining route into the rebel-held eastern section of the city, by pro-government forces aided by Russian air support, made life even more difficult for the 300,000 Syrians still living there. Humanitarian aid was unable to get through and few trapped there were able to leave. Opposition forces managed to break the siege in early August but fighting has only gotten more intense since then. The U.N. and aid groups are warning of a humanitarian catastrophe.

Few are more at risk in that catastrophe than the children of eastern Aleppo; prevented from going to school or even hospital, as both are deemed too unsafe, they live under constant fear of attack. They survive, rather than live.

TIME spoke to aid workers familiar with Aleppo to discover what daily life is like for thousands in the war-torn, eastern part of the city:

Here’s What the U.S. Can Do to Save Syria From Starvation

Food is in short supply. As there are no markets or shops to buy provisions from, many Syrians have been attempting to grow their own food supplies in small kitchen gardens. However, starvation levels have reached a point that people are cooking leaves off trees.

According to the Human Rights Watch, prices for basic food have increased sharply since the siege began. A kilo of rice now costs as much as $14, a kilo of sugar $20 and olive oil is $44.

If anything the water situation is even worse. Nearly two million people in the city have had no access to running water since July 31, according to the the UN Office for the Coordination of Humanitarian Affairs, when bombing cut power to the pumps.

The civilians in eastern Aleppo – one third of whom are children – are relying on poor quality water from wells which are potentially contaminated by fecal matter and unsafe to drink. With no fuel to boil water, many people – particularly children, who have a weaker immune system – are falling ill.

Dr Abdulkarim Ekzayez, Health Coordinator at Save the Children International, told TIME that his team have seen increased incidents of water-born diseases related to children and described the lack of sanitation in Aleppo as their “biggest health risk”.

“No one can ensure the quality of this water and it quickly becomes contaminated,” he said. “Children are particularly vulnerable to waterborne diseases and as there have been no vaccinations in Syria for more than four or five years due to a lack of access, young children are more likely to get sick.”

This Is the Most Googled Word in Syria

One of Aleppo’s biggest casualties is its hospitals; out of the eight in eastern Aleppo, six have been damaged by bombing in the last four and a half years. Assad’s regime and its allies have been accused of targeting medical facilities.

Today, just 35 doctors are left to treat the 300,000 people who remain in the city. “Being a doctor in Aleppo is one of the most dangerous professions you can imagine today,” says Pablo Marco Blanco, Operations Manager for Doctors Without Borders in the Middle East. “Many have been killed by the bombings, others have fled and the few that have stayed are putting their life on the line to keep providing for the population – but they know the risks are very high.”

As a result injured civilians — including children — sometimes do not go to hospital to be treated. “Doctors say that when someone gets injured they need to make the decision of whether or not to risk going to hospital or wait out the pain at home.”

Hospitals are small facilities, based in basements or flats. They usually have a maximum of 40 beds, with very few doctors and medical staff, but some days, after a bombing, they will have an influx of up to 100 wounded patients.

“The doctors have been telling us about the terrible decisions they need to make,” Mr Blanco said. “Because they have so many patients they can’t help all of them, so they need to choose who to save and who to let die.”

Save the Children says almost all of its eight ambulances are now missing doors and windows and are in a state of disrepair from driving over roads covered in bomb craters. During the past week, two took a direct hit from airstrikes. They are still running – but all they can do is take victims to hospital, not treat them en route.

Construction material is in just as short supply as food, clean water and medical supplies – so when a building becomes damaged or destroyed, it remains that way. Syrians tend to move from one area to another to avoid the bombings, and often five or six families can be found sharing a roof.

There is no official support for children who lose their parents in the air strikes and it is a struggle for aid workers to access them, so many rely on members of the community to take them in.

Dr Ekzayez told TIME that it’s common to find a home with one father or mother but many children from different families living there because they have lost their caregiver.

Save the Children says that last month, 16 of the 46 schools they support were hit either directly or indirectly by air strikes. Now parents are too frightened to send their children to school, and prefer for them to stay at home or even shelter underground to ensure they’re protected if bombing begins.

“I used to see a lot of children walking and running in the streets of Aleppo, but now they just stay inside,” Dr Ekzayez said. He explained that even when the children did go to school, the constant noise and threat of air strikes meant it was hard for them to focus anyway.

Khaled Khatib, an Aleppo-based photographer for the White Helmets, the volunteer-only Syrian rescue and humanitarian group, told TIME that many children bypass their education in order “to get food”.

“There are many children who lose their fathers and need to work to get food,” he said. “They work sewing, selling and carrying stuff. Children in Syria can’t live like children in other countries.”

Mr. Khatib explained that a normal day for a child in Aleppo is to “watch TV for a few minutes, then to carry water to their house and listen to the explosions of air strikes”.

“Last week I saw a boy who was crying because his bowl of water fell,” he added. “Can you imagine that?”

Certainly, for anyone who has not visited Aleppo since the war began, it is impossible to grasp quite how savage conditions really are there. But for those who have lived, worked and studied in the city, as Dr. Ekzayez has, the destruction the war has left in its wake is devastating.

“I feel that my country is no longer my country,” he said. “All the conflicted parties are trying to change not just the geographical areas of Syria and Aleppo – but actually the personalities of the people.

“I can see my country collapsing before my eyes.”