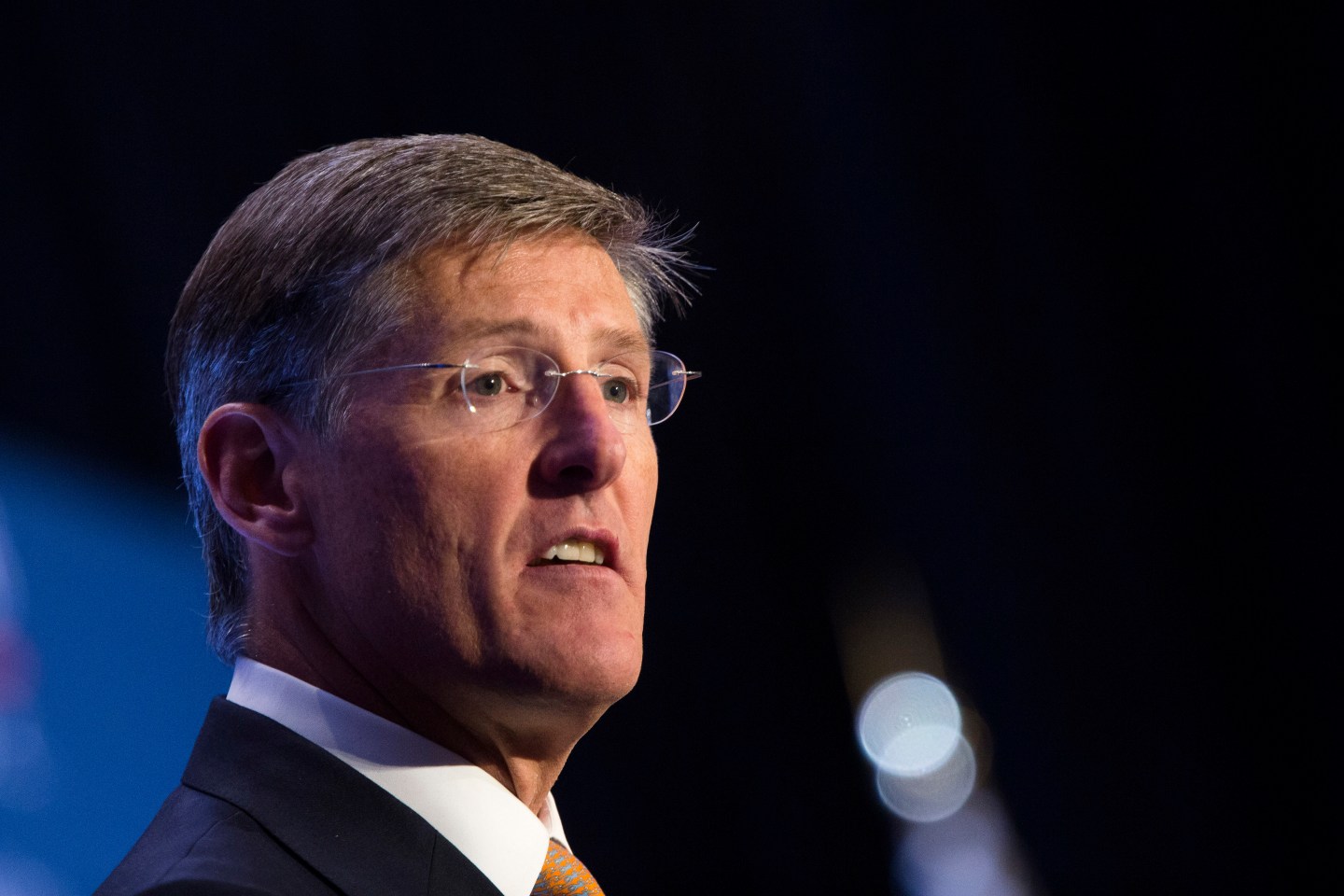 Michael Corbat, chief executive officer of Citigroup Inc., speaks at an Economic Club of Washington luncheon in Washington, D.C., U.S., on Wednesday, Oct. 28, 2015. Corbat said income inequality is among the most important challenges facing the U.S. and that the bank is doing its part to help young people find jobs.
Photograph by Drew Angerer — Bloomberg via Getty Images

Earlier this year, an analyst asked Citigroup Chief Executive Michael Corbat what he would do if activist investors tried to shake things up after what seems like eons of underperformance.

Corbat’s response? He would take the new shareholders down to the U.S. Federal Reserve so they could see the limitations he faces.

“He was confident that they would not have any success with getting the regulators to look kindly on their plans,” said Charles Peabody of Portables Partners, recounting his March meeting with Corbat.

The Fed’s tight control over capital distributions, business plans and interest rates is a challenge for all big U.S. banks today. But Citigroup may be the best example of how the Fed’s efforts to make the banking system safer are tying management’s hands and frustrating shareholders.

Corbat is planning to set out new targets later this year, and people close to him say he knows the pressure is on. Yet he has little choice but to ask for more patience, analysts say. Corbat and his management team have been meeting with analysts and investors for months, explaining Citi’s situation.

Citigroup (C) needed more than $45 billion in bailouts during the 2007-2009 financial crisis – more than any other bank – and regulators have kept it on a tight leash. That left it lagging its peers in terms of capital returned to shareholders and its share performance.

As the 56-year-old former bond trader approaches his fourth anniversary as CEO, the bank is slipping further away from financial targets he set out in March 2013 and analysts’ profit forecasts suggest the goals will remain elusive.

“It is an adjustment that is taking longer than would have been expected,” said Macrae Sykes, an analyst at money manager Gabelli & Co, which owns Citigroup shares.

Returns on capital “have been underwhelming the last couple of years,” he added. “It just continues to be a challenging environment.”

Shortly after taking the helm, Corbat set the goal of reaching a 10% return on equity by 2015.

Last year, the gauge, which measures how well a bank uses shareholder capital to earn profits, only hit 9.2% and analyst estimates suggest it may slip to 7.5% this year.

Analysts say the Fed would need to allow the bank to return as much as it earns to significantly improve shareholders’ returns and the Fed now lets Citi distribute about 65% of its capital. Corbat reached that level in June when he won approval from the regulator to triple the bank’s dividend and increase spending on its stock buybacks by more than a third. Previously, Citi had failed Fed tests of its capital plans twice.

While no activist investors have stepped forward with big stakes in Citigroup, they have been eyeing big bank stocks for some time.

On Monday, ValueAct Capital Management disclosed a 2% stake in Morgan Stanley, spurring chatter on Wall Street about who might be targeted next.

Even without activists investors, investor patience is wearing thin.

“Citi management owes investors an explanation as to how they are going to get capital out of the business,” said Keefe, Bruyette & Woods analyst Brian Kleinhanzl.

Corbat declined to be interviewed for this story, as did the bank’s chairman, Mike O’Neill. Other executives who spoke to Reuters did so on the condition of anonymity.

“The strategy we are executing is generating significant capital,” the bank said in a statement. “We are committed to continuing to increase the amount of capital we return to our investors to reach the amount they expect and deserve.”

Corbat took over Citigroup after a tumultuous period.

Chairman Michael O’Neill was only six months into his tenure in October 2012 when he replaced Vikram Pandit with Corbat and made him responsible for carrying out the board’s strategy of unloading bad assets, reducing expenses and returning capital.

Citigroup shares soared 20% in Corbat’s first four months on the job. But the stock has moved little since.

As of Wednesday Citigroup shares had gained 27% during Corbat’s tenure as CEO, compared with a 39% rise in the KBW bank stock index and gains of more than 50% for big bank rivals JPMorgan Chase & Co and Bank of America Corp.

To improve performance, some analysts and investors have called for Citi’s break up, perhaps by separating its consumer and institutional businesses, or by selling big chunks, such as its Mexican bank, Banamex.

As part of a broad retrenchment, Corbat has already shed consumer operations in 22 countries of more than 40 where Citigroup operated. He also closed a third of branch offices and 182 operations sites. Payroll is down by 43,000 jobs during his tenure.

But some investors and analysts want more. Both Kleinhanzl and Mike Mayo, an analyst with CLSA, have argued that Citigroup ought to break up or sell larger assets.

“They have taken a lot of steps, but it is not enough,” said Mayo. “Many investors have said, ‘Amen’ to what we have proposed.”