China’s Ping An Eyes an Overseas Splurge, Possibly in the UK 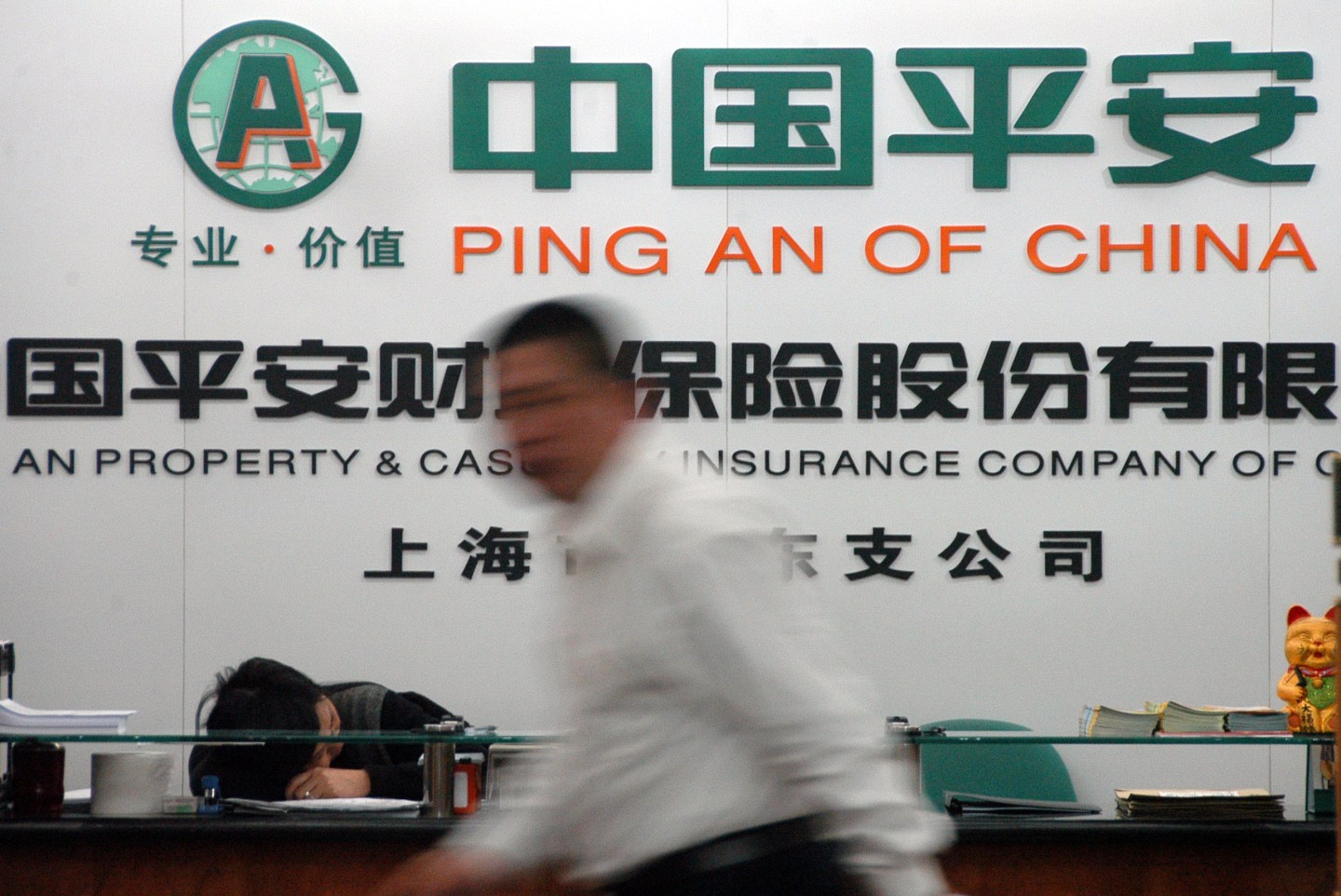 NANJING, CHINA - MARCH 1: (CHINA OUT) A worker walks past a board at Ping An Of China on March 1, 2007 in Nanjing of Jiangsu Province, China. Ping An Insurance, China's second-largest life insurer, saw its shares close at 47.92 yuan (5.99 U.S. dollars) per share on Thursday morning on its debut on the Shanghai stock exchange, down 4.16 percent from its opening price. (Photo by China Photos/Getty Images)
China Photos/ Getty Images/ File

Ping An Insurance Group of China (PNGAY), the country’s second-largest insurer, is aiming for a possible fivefold increase in overseas investments and has not been put off Britain by its vote to leave the European Union, its group chief financial officer (CFO) told Reuters on Thursday.

Ping An plans to gradually increase its overseas investments to 5-10% of total insurance assets if it can find appropriate targets, CFO Jason Yao said in an interview.

It currently invests about 2% of its total assets abroad, well below the 15% cap imposed by China’s insurance regulator, giving it ample room to splurge.

See also: Why Chinese Investment in Overseas Real Estate Has More Than Doubled

“That could even happen in the next three to five years as the world is changing very fast,” Yao said, naming the United States, Britain and Europe as the key investment markets the company is targeting.

Britain’s vote on the EU was not an issue, he said.

“There will be investment opportunities in the UK … Britain’s stock market and currency have gradually stabilized (since the vote). We’ve been watching that very closely,” he said.

Based on Ping An Group’s current insurance assets, the company’s total overseas investments could reach as much as $27.5 billion from about $5.5 billion currently, according to Reuters calculations.

See also: Here’s Why China’s Alipay Is Teaming Up With France’s Ingenico

Ping An, the country’s second-largest insurer by market value, posted an 18% rise in first-half net profit, led by a one-off gain in its internet finance business.

Yao said it was a “relatively big challenge” to stem the slide in investment income in the second half of this year, after investment returns fell 54% in the first half, hit by falling interest rates and the stock market downturn.

That increases the impetus to diversify its asset allocation and expand its footprint abroad.

However, steady growth in its life insurance and banking businesses helped the rise in profit, in contrast to the declines forecast by rivals.

Ping An’s overseas ambitions mirror those of other Chinese firms, including Anbang Insurance Group and Fosun International, which are spending billions on overseas acquisitions in a bid to reduce their dependence on the slowing Chinese economy and weakening yuan currency.

Yao said the parent company would push ahead with its plans to list its Ping An Securities arm in Hong Kong by the end of this year at the earliest. Yao declined to specify the size of the IPO, but IFR, a Thomson Reuters publication has reported it could be as large as $1 billion.

As for Lufax, a Ping An Group-backed Chinese online lending platform, Yao said a dual listing was still a possibility and could happen next year.

Lufax serves as a trading platform for a wide variety of financial products between institutional and individual investors, including wealth management products and peer-to-peer loans.

Lufax raised $1.2 billion in its last round of fund raising, valuing the company at $18.5 billion, but Yao said there were no current plans to raise more capital ahead of any IPO.

Years of breakneck growth for China’s top insurers has been partly fueled by a splurge on risky investment products that could punch multi-billion-dollar holes in their balance sheets if the slowing economy triggers heavy debt defaults.