Wynn Bets Big with a New $4 Billion Resort, Macau’s Most Expensive Yet 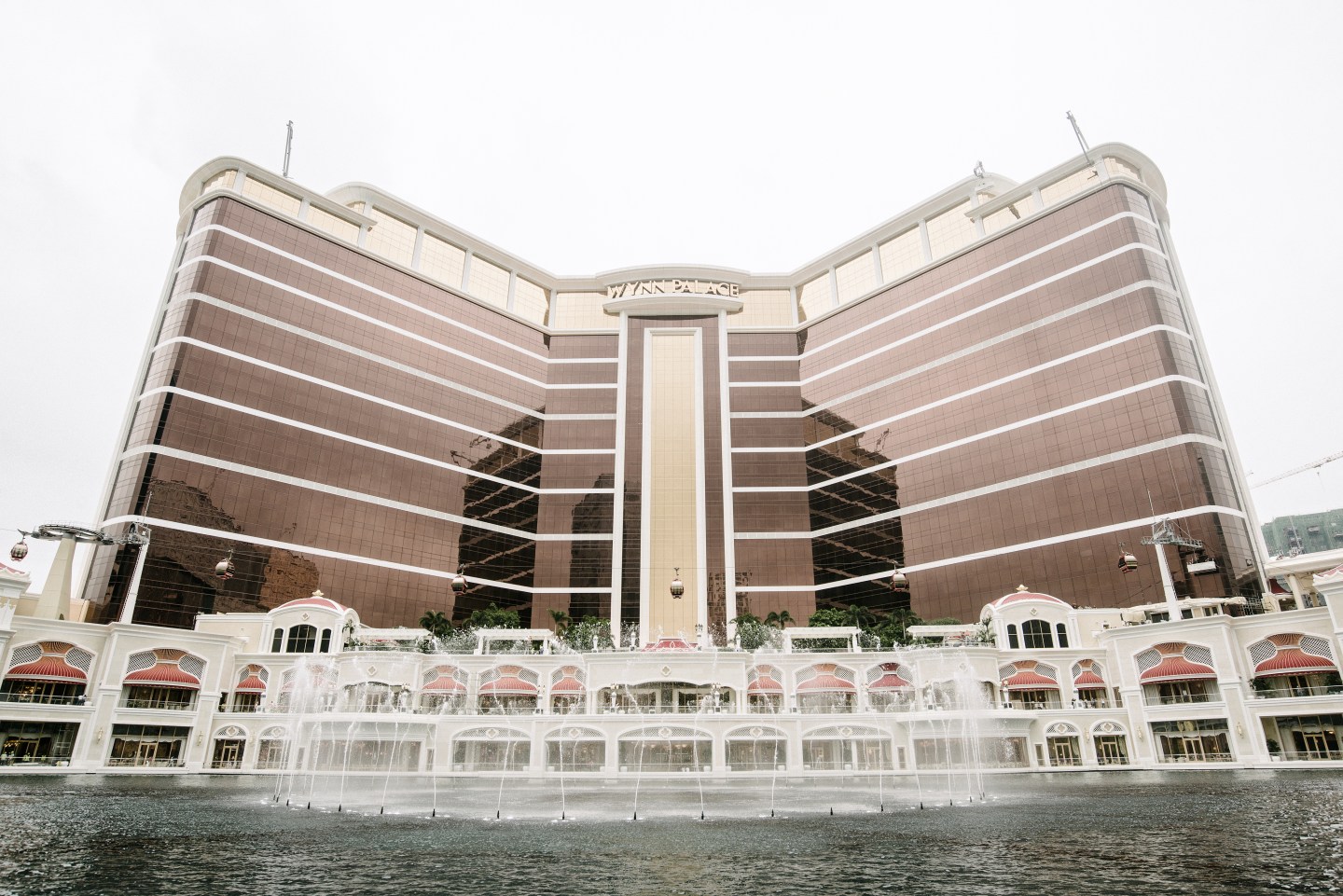 Wynn Resorts Ltd.'s Wynn Palace casino resort stands in Macau, China, on Monday, Aug. 15, 2016. Steve Wynn, the 74-year-old founder of Wynn Resorts who helped transform the Las Vegas Strip into an international gambling destination in the 1990s, is bringing luxury up another notch at the Wynn Palace even as Macau's government attempts to reinvent the world's biggest gambling center into a family-friendly playground for tourists. Photographer: Calvin Sit/Bloomberg via Getty Images
Calvin Sit — Bloomberg via Getty Images

U.S. casino tycoon Steve Wynn’s newest pleasure palace in Macau boasts massive dancing fountains but the Chinese territory is anything but bubbly as it prepares to welcome the $4 billion resort to its struggling glitter strip next week.

Macau’s most expensive casino yet is due to open on Monday a month ahead of a $3 billion gaming resort by U.S. billionaire Sheldon Adelson, marking the beginning of the end of a boom in grandiose casino construction that helped transform the former Portuguese colony into the gambling capital of the world.

But the properties – featuring thousands of hotel rooms, an aerial gondola and a miniature of the Eiffel Tower – are opening as Macau gambling revenues languish at 5-year lows and a corruption crackdown forces Chinese high-rollers to play in rival Asian destinations.

Wynn declined to say how long it would take to break even on the investment as he addressed reporters at a pre-opening event in Macau on Wednesday, but emphasized this would be a diversified resort with gambling merely being one attraction.

“In every business there are good years and bad years. For our return on investment I expect we will be fine,” he said.

“What we are seeing now is a more normalized kind of market.”

Casino bosses like Wynn are betting the new resorts on the Cotai strip will breathe life back into Macau, which generates five times more gambling revenue than Las Vegas.

Analysts however warn that additional supply could increase competition at a time when operators are already offering discounts to lure patrons.

“If they (Wynn) had known they definitely would not have spent $4 billion, they probably would have spent something like $1 billion,” Nomura analyst Richard Huang said in Hong Kong.

Wynn Macau’s newest property, Wynn Palace, would be profitable, Huang said, but it would likely generate a disappointing return on investment. With hindsight, it was clear that the operators, particularly Wynn, miscalculated their expansion during the boom years, he added.

Besides the usual constellation of luxury stores, the new resort is festooned with $100-150 million worth of art including a $35 million Jeff Koons “tulip” sculpture and a quartet of $15 million antique Chinese vases.

Planned several years ago when soaring revenues seemed unstoppable, the projects initially budgeted for earnings about four times bigger than what is currently being generated.

Macau is the only place in China where gambling in casinos is legal but demand from wealthy patrons has plummeted over the past two years due to Beijing’s crackdown on graft and China’s slowing economy. Regional rivals like the Philippines and Vietnam have sought to capitalize on the situation by luring Chinese gamblers to their own casino hubs.

New openings from Melco Crown (MPEL) and Galaxy Entertainment (GALAXY-ENTERTAINMENT-GROUP-LIMITED) last year have not significantly bolstered receipts, while operators are being frustrated by strict official limits on gaming table allocations.

Wynn Macau’s share price tumbled after it confirmed it had received only a third of the gaming tables it had requested, as the government tries to wean itself off gaming revenues and re-brand Macau as a more mass-market destination.

Wynn Palace and Adelson’s Parisian resort, due to open on Sept. 13, will add close to 5,000 hotel rooms. MGM China (MCHVF), SJM Holdings (SJMHF), and The 13 Holding are also set to open multibillion resorts in the next two years.