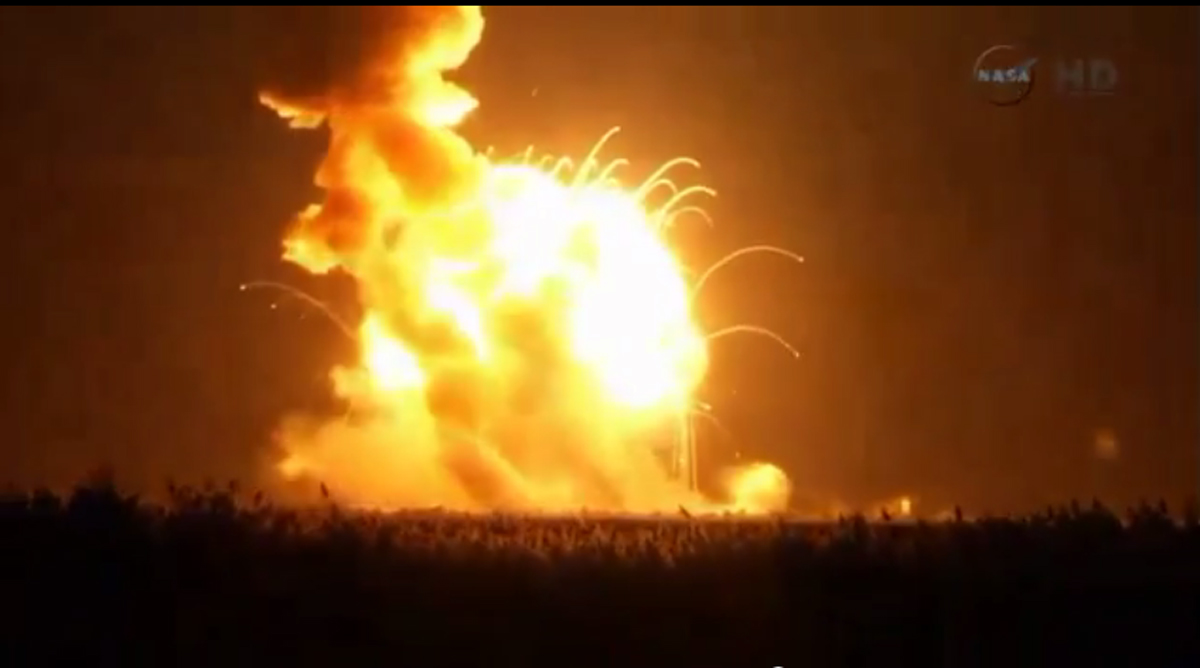 An unmanned Antares rocket is seen exploding seconds after lift off from a commercial launch pad in this still image from NASA video at Wallops Island, Virginia October 28, 2014. The 14-story rocket, built and launched by Orbital Sciences Corp, bolted off its seaside launch pad at the Wallops Flight Facility at 6:22 p.m. EDT/2222 GMT. It exploded seconds later. The cause of the accident was not immediately available. REUTERS/NASA TV/Handout via Reuters (UNITED STATES - Tags: SCIENCE TECHNOLOGY DISASTER TPX IMAGES OF THE DAY) FOR EDITORIAL USE ONLY. NOT FOR SALE FOR MARKETING OR ADVERTISING CAMPAIGNS. THIS IMAGE HAS BEEN SUPPLIED BY A THIRD PARTY. IT IS DISTRIBUTED, EXACTLY AS RECEIVED BY REUTERS, AS A SERVICE TO CLIENTS - RTR4BYKF
Photograph by NASA — Reuters

To reverse his fading fortunes, Donald Trump is placing two new power players in his campaign’s top positions. His choices, however, are likely to result in what students get from mistakenly mixing an acid with a base in chemistry class: an explosion. That’s the view of political operatives interviewed by Fortune, none of whom wished to be quoted on the record.

On August 16, the campaign announced that Stephen Bannon, executive chairman of Breitbart News, will become its CEO, a newly-created position and will “bolster the business-like approach of Mr. Trump’s campaign,” according a press release from the campaign.

Bannon will oversee “campaign staff and operations,” the release states. Kellyanne Conway, a veteran Republican strategist, is the new campaign manager. Paul Manafort, whose reputation has suffered following the discovery of secret ledgers from the deposed, pro-Kremlin Ukrainian regime listing him as the recipient of millions of dollars in cash, remains as “chairman and chief strategist.”

However, it’s clear that Manafort is being demoted—despite protests from the Trump campaign and Manafort himself, who said: “It is imperative we continue to expand our team with top-tier talent. Steve and Kellyanne are respected professionals who believe in Mr. Trump and his message and will undoubtedly help take the campaign to new levels of success.”

So who’s setting the overarching strategy? According the release, Bannon won’t just run administration, but will be responsible for “strategic oversight of major campaign initiatives.” Conway will “work on messaging and travel frequently with Mr. Trump.” In most campaigns, the campaign manager—Conway’s role—makes the personnel decisions, chooses the ads, and hones the messaging. But Conway is apparently sharing all three areas of responsibility with Bannon. This arrangement is like putting two CEOs in charge of company, a solution that almost never works, even if it’s not a flailing company.

Fortune asked the Trump campaign via email to specify who would have the final authority—meaning the authority to recommend a position to Trump—on such matters as TV advertising and staffing. We did not receive any reply by press time, but will post the campaign’s response if we get one.

According to sources who’ve worked with both Bannon and Conway, they’re so different in positions and temperament that Trump is likely to be hearing two totally divergent views on how to run his campaign. The risk, these politicos say, is that while Trump will eventually go with one camp or the other, the confusion that reigns while the conflict festers with further damage his prospects.

Bannon and Conway do have traits in common. They’re both conservative populists who advised the movement’s two leading proponents: Bannon backed Trump from the start of the primaries, while Conway counseled Ted Cruz. But Bannon is a champion of the most anti-immigrant, anti-free trade, rip-the-establishment wing, or fringe of the GOP. He’s charged that House Speaker Paul Ryan “was grown in a petri dish of the Heritage Foundation.” Recent stories in Breitbart praise a Norwegian police chief for declaring that “xenophobia is highly rational and justified,” and blasts the “refugee resettlement industry” for opening American to a dangerous flood of Muslim immigrants. Trump’s incendiary attacks on the Hispanic judge in the Trump University case and a Muslim family who lost their son in Iraq received strong support on Breitbart.

By contrast, Conway is an attorney-turned pollster who’s advised an impressive roster of candidates, including Fred Thompson, and the pre-Trump Mike Pence. She’s conducted surveys for the Republicans aimed at heightening the party’s lagging appeal to women. Conway is a pragmatist who fashions the message according to how it plays not in a raucous sports arena, but in the national and swing-state polls.

Trump made a decent impression on mainstream voters with his three recent addresses on the economy, the defeat of ISIS, and public safety. Clearly, those speeches were part of a “pivot” to serious issues advocated by Manafort, a shift designed to exploit voters’ dissatisfaction with the economy and fear of growing, terrorism-breeding chaos abroad. On the airplane and in the green room, it’s likely that Conway will prod Trump to stay on message. Given her past record of following polls, she’ll likely advise him to make the pivot permanent, and to refrain from the attacks on fellow Republicans and the press that muddy his message.

But Bannon is a flame-thrower like his new boss, who this week said: “I don’t want to pivot. I don’t want to change. You have to be you. If you start pivoting, you’re not being honest with people.”

If he follows that pattern, Bannon will keep encouraging Trump to be Trump, to be spontaneous on the stump, to speak the “truth,” to revel in shunning political correctness, to beware the pivot points him to a cliff. For Bannon, as he’s sated, the Trump that won the primary is the Trump who will prevail in the general election. He’s predicting a giant wave of frustrated blue-collar voters will propel Trump into the White House.

A likely scenario, according to operatives who know the two counselors, is that the data-driven Conway is likely to cite polls and big data showing that Bannon’s approach can’t work. According to their view, her aim will be to keep Trump on message. But if Bannon sticks to past form, he will warn Trump that shelving the spontaneous style that made history is a big mistake. Will Trump go with his gut, with the roar of the crowd, with what he wants to hear— in other words, with Bannon? Or will he make a cool, clinical choice based on what it takes to win—and go with Conway?

The answer is uncertain. What’s Trump doesn’t need is two strategies that are on collision course. Trump needs a team that’s all about teamwork for a change, not another episode of high drama.