How This Female Olympic Wrestler Is Pinning Sexism to the Mat 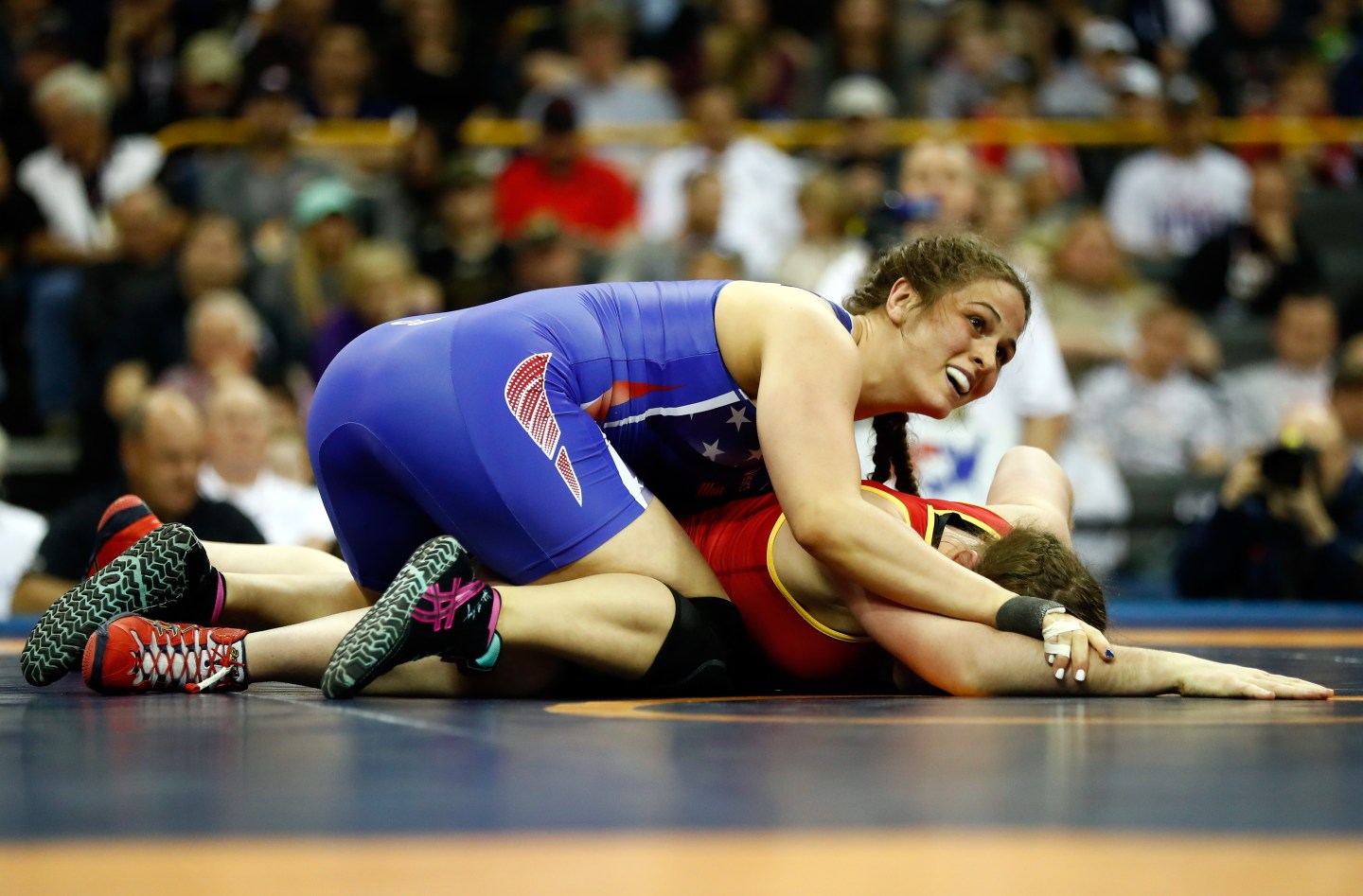 The United States has never won an Olympic gold medal in women’s wrestling. But if Adeline Gray has anything to say about it, that will change—and soon.

Gray, who hails from Denver and trains in Colorado Springs, is the best shot the Americans have had in a very long time. A three-time world champion, including the two most recent contests in 2014 and 2015, the 25-year-old is favored to make the podium at the Rio Games. Meanwhile, she is also breaking new ground off the mat, making a name for herself as an advocate for gender equality in sponsorships and of changing the image of women in combat sports.

“We’re still developing role models in women’s wrestling,” Gray says. “It’s easy for boys to just pick a mainstream sport that we associate with strength and power and think about a future in the NFL or the NBA. But with women’s sports, there’s still this challenge of what do you do with your goals beyond four years of college sports.”

Although much progress remains to be made, Gray believes that it helps that mixed-martial arts, wrestling’s much bloodier counterpart, has seen explosive growth in professional women’s competition. In a few short years, the sport went from having no women’s fights to launching Ronda Rousey into the stratosphere as one of the sport’s highest-paid fighters and a household name. Rousey, a bronze medalist in judo at the 2008 Beijing Games, has been credited with paving a path for women in niche combat sports. Now it’s possible for these athletes to see their trip to the podium as the launch point of a lucrative career rather than the ending of a humdrum one.

Gray adds that she’s not tempted by money and notoriety of MMA—at least not now. For the moment, she says she is focused on staying with wrestling, adding, “But I think it takes someone like Ronda to make sure…that sponsors are listening and paying attention and recognizing those accomplishments.”

Because of changes in weight classifications for women’s wrestling in 2012, Gray was unable to compete. Then, she was hit with another blow in early 2013, when she learned in that wrestling—which has been an Olympic sport since 708 BC—would be eliminated from the competition starting in 2020. (Women’s wrestling was added to the Olympics in 2004.) The sport was only raised from the dead by grassroots support from wrestling fans—including author John Irving; in Sept. of 2013 the IOC voted to overturn their original ruling, reinstating the sport.

Part of the rationale behind the drive to eliminate wrestling from the Games was the sport’s reluctance to embrace women, say critics. To get it reinstated, wrestling advocates were pressured to bolster the female side of their sport, and to do so quickly. Women are “a breath of fresh air to wrestling,” Gray says. “I’m glad that the IOC and international wrestling had a wake-up call.”

Part of what has historically held female wrestlers back in the U.S., says Gray, is money. She points to the Canadian women’s team, which she feels is better funded and supported. “It speaks to their results,” says Gray, noting that the Canadians consistently top international rankings. Other nations, such as Japan and Turkey, have also invested in the sport, creating a deep bench of elite female wrestlers to send into global competition.

In the U.S, fewer than 10 state high school associations have girls wrestling sanctioned as its own sport, Gray said. The lack of recognition at that level can mean a paucity of overall funding and awareness, even as boys wrestling has been a staple high school sport for generations. From the time she started wrestling as a child, Gray had to compete against boys, a prospect that would deter many would-be girl wrestlers. Gray, one of four sisters, says she was unfazed.

“It isn’t just getting girls into the sport and trying it out,” she says. “They’ll go, but in middle and high school they have hurdles dealing with schools and coaches that aren’t equipped to handle them. They didn’t even have bathrooms for me when I used to weigh in. Something like that is an easy fix, but I still don’t think coaches think about it. We’re going to have to teach coaches how to be fair men and women, and that there are women out there who want to wrestle.”

Then, there’s the matter of sponsorship dollars. Women in wrestling face the same glaring pay gay that plagues other female athletes.

“Sponsors are getting excited about me now,” Gray says, “and that’s awesome, but we still struggle with funding. There’s no fraternity for wrestling like there is for the men.” She is one of the few women sponsored by Asics, one of the biggest backers of elite wrestling.

While USA Wrestling gives equal prize money to male and female athletes for winning a tournament or an Olympic medal, Gray pointed to gaps in collegiate wrestling programs, longtime feeders for Olympic wrestling, that may be more subtle than Title IX dictates. While women may be allowed onto collegiate teams, the funding and support doesn’t tend to follow them after graduation. When men complete those programs, they may donate or support a fellow alum making an Olympic bid. “It’s very skewed,” she says.

“It’s a missed opportunity, with these groundbreaking things happening with women’s wrestling,” she said. “The men are still doing great things, but any time the women get out there, we’re making history and we’re doing it step by step. Getting the right sponsors is huge and I think it would make people more aware of the sport.”