Through Folk Art, Some of the World’s Poorest Entrepreneurs Find Financial Hope 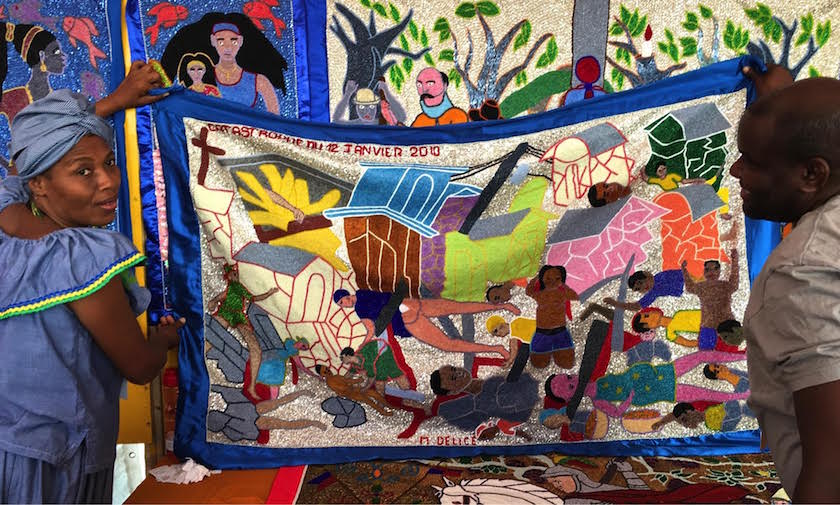 Janet Nkubana sits at a sales desk in her Kigali headquarters, flipping through receipts. She cannot suppress a big smile as she describes her work with a vast and talented artisanship across her home country. Also irrepressible are her memories of Rwandans at their worst, which serves as a tough reminder of why she became an entrepreneur.

It was the summer of 1994, days after what’s been called the swiftest genocide in history: the Hutu’s 100-day slaughter of 800,000 Tutsis and moderate Hutus. Nkubana, who is now 56, was among thousands of Rwandan refugees returning from camps in neighboring Uganda. Trudging through smoldering piles that were once villages dotting lush green landscape known as Land of a Thousand Hills, she was surrounded by carnage, staggering smells, and desperate, dazed survivors. “Something caught my eye,” she recalls vividly, “it was an infant curled up on the ground trying to nurse from its dead mother’s breast.”

To help the widows and orphans who remained, all deeply traumatized and fending for themselves, she tapped into what was innate. A master weaver herself, Nkubana taught others to refine their own simple, functional creations of local grasses and dyes into stunning tribal baskets for commercial sale. In turn, her students trained others and the operation mushroomed into 40 cooperatives with nearly 5,000 women earning enough money to make material differences in their daily lives.

Gahaya Links Cooperatives, the enterprise Nkubana co-founded with her sister Joy, is part of a surge among the world’s poorest people who are using age-old cultural practices to pull themselves out of economic hopelessness. They have converted folk art— traditional, utilitarian and ceremonial handcraft passed from generation to generation—into a multi-billion dollar global industry.

Rising consumer demand for indigenous items, individually produced, means that the weavers, rug makers, potters, and other artisans like Nkubana have an exploding array of outlets for their work. Of course, this also means big sales for retailers, including chic boutiques, major department stores, and online shops. Most significantly, the boom has improved living standards for millions of people.

Every summer, the commercial interest in folk art is put on full display in Santa Fe, New Mexico. The city recently hosted its 13th annual three-day International Folk Art Market (IFAM), a world mecca for artisans and buyers. With bracelets woven by Colombian Zenu to fine silk spun in Uzbekistan, and with prices for goods ranging from $2 to $20,000, the mix in the market’s stalls has broad appeal.

The festival, which was held in early July, teemed with 20,000 shoppers who spent a collective $2.8 million over a fiercely hot weekend and pushed the Market’s total sales history to $25 million. The artists take home 90% of the gross sales, a bounty for the many who hail from conflict zones and remote regions, places short on basics like running water and power, much less banks, and stores.

Nkubana, a Folk Art market veteran since 2008, recounts her early Santa Fe years: “When we brought the first earnings back from the Folk Art Market, people couldn’t believe it. For the first time they thought about buying a cow or a goat, instead of worrying about the next meal.”

Finally able to afford the uniforms required for school, the weavers sent their children to formal classrooms. And every member of the Cooperatives bought health insurance, a development that has helped push down maternal and infant mortality rates in recent years. Before long, the weavers were opening savings accounts and signing new contracts with retailers like Anthropologie and department stores like Macy’s. For the new Rwandan entrepreneurs, the changes have been breathtaking. Once denied an education, commonly victims of rape and prostitution, they now command respect as breadwinners in control of their destiny.

Making it to the world’s finest folk art arena in New Mexico means management and leadership training for all of the artisans, who are matched with mentors and spend several days in workshops learning about training talent, marketing, and microfinance. The Market is selective in its support, preferring to create a business springboard for those who can go home and mentor other artisans. And with the Santa Fe Folk Art Museum, it dispatches teams of professionals and seasoned collectors to far reaches of the globe, where they examine the economic impact of folk art and search for the most skilled artisans.

They found that artisan enterprises make up “one of the largest economic sectors in the developing world,” says Melanne Verveer, the recent White House Ambassador for Global Women’s Issues and director of the Georgetown Institute for Women, Peace and Security. Simply put, Verveer states, “Exposure and access to buyers is transformative.”

The Market collects donations to cover artists’ travel, lodging, training, and display costs. The modest outlays reap enormous returns and dramatic transitions for the artists, some who journey from workspaces under shade trees or inside mud huts. Almost all make quick sales and earn more money than they have ever seen. Yet the most sustainable gains come in the form of what they learn in the process: business planning, how to access credit, and how to stand out among competitors.

The business lessons come from the Market’s battalion of 2,100 volunteers. Santa Fe resident Catherine Allen started the Mentor to Market Program by engaging experts and dozens of translators to address the new entrepreneurs’ costs, pricing, and other basic business assessments. The program has since morphed into interactive seminars in microfinance, production efficiencies, consumer preferences, marketing, and online sales.

“We wanted to see how what they earned and learned at the Folk Art Market impacted their lives,” reports Allen, who specializes in cyber security and corporate strategy as CEO of the Santa Fe Group.

Allen traveled with the International Folk Art Market to Uzbekistan last year. In the capital, Tashkent, she found that the government was highly motivated to extend tax breaks, housing for art training centers, and loans to Ikat textile designers, ceramicists, metalsmithers, and embroiderers, after seeing the performance of Uzbeks who already brought their Silk Road creations to the Santa Fe Market. Hearing the Minister of Culture’s calculation that Uzbek folk art makes up 5% of the country’s GDP, Allen was struck when she saw what it meant on the ground. “What they are doing with the money is amazing: new schools for the traditional arts, new homes with modern facilities, a new Central Asia Folk Art Market to provide more opportunities for the artists, schools, and healthcare clinics….”

Nkubana’s experience in Santa Fe prompted her to start a mentorship program once she returned to Rwanda. Her success led to government support from Rwandan President Paul Kagame, who views the country’s arts as an economic stimulant and stabilizer. Underscoring his “One Rwanda” policy that denies tribal divisions, Kagame claims that space and subsidies for Hutu and Tutsi weavers who sit side by side creating baskets every day, is an investment in national healing, women’s advancement, and economic development.

Even for economies still mired in conflict, the indigenous art business helps restore individuals sense of self-worth. In Guatemala— where drug infestation, organized crime, and corruption are endemic—such outside stimulus can make all of the difference. Wisconsin-based textile designer Mary Anne Wise introduced rug hooking to local Guatemalan women as a new folk art based on old cultural practices. Using strips of Salvation Army clothing donations and other recycled materials along with Mayan motifs and colors, these women have created floor coverings that fetch hundreds of dollars a piece. Wise established Multicolores, a local cooperative, to train others to teach the skills, manage orders, and monitor the financials. In one of the world’s most impoverished and violent countries, where females suffer the most, Multicolores is helping to change the equation.

Rug making has elevated the status of these Guatemalan women artisans, who pour their earnings back into the local economy. Yolanda Calgua Morales, a rug hooker near Chichicastenango, used $500 of her Santa Fe proceeds to purchase six faucets so six families could tap into the main pipe of a potable water project in an isolated region several hours northwest of Guatemala City. Another, Glendy Muj, from the southwest lakeside town of northwest Panajachel, bought paperback books to read to her six children, all of whom are under 13 years old.

Folk art, which has helped to deliver daily life improvements even in the most remote regions of the earth, offer many lessons that can ultimately yield wider spread gains, contends Manuel Montoya, an economist at the University of New Mexico. Montoya has grown impatient with the constant handwringing over globalism’s impact on local economies. He sees a reverse connection: village economies can offer a nutritious feed to an economy that is dominated by mass production. Increasingly, the globalized economy hungers for the unique and locally made. Montoya has led studies, and points to others, such as the Inter-American Development Bank’s Orange Economy, that quantify and examine ways to expand what he calls “cultural entrepreneurship.” Enhancing resources and markets for folk artists is “a kind of risk management” in economies that are highly sensitive to natural resource production and price shocks. Commodity-driven countries can offset their losses in oil or mining industries, he argues, by selling local, craft goods that international consumers are willing to pay a premium for these days.

Montoya has an ambitious plan to raise the profile and increase the speed of integration of folk art as a driver of worldwide economic growth.

Those attending the Olympics in Rio this summer, or watching it from their living rooms, will see something unusual on the super-sized jumbotrons: mini-documentaries on folk art’s role in the global economy. Montoya secured the 45-second spots on the big screen from Olympic authorities and Brazil’s government, and expects the message to resonate with an audience already tuned into internationalism, and to especially hit home in Brazil, where artisans are plentiful and poverty is widespread.

In the meantime, the Santa Fe Folk Art Alliance (IFAA), the parent body of the Market, is taking on partners like the Aspen Institute’s Alliance for Artisan Enterprise, folk art groups, as well as major foundations, corporate community funds, the State Department, and individual philanthropists interested in deepening the commitment to local economies. IFAA CEO Jeff Snell says the mission is simple: “Using world class artists, we’re developing a pipeline of catalysts for positive social change. I call this social entrepreneurship; it’s different from conventional entrepreneurism that hangs its hat on value that is privately captured.” In other words, folk art is both an expedient and respectful way to help marginalized communities that would not otherwise have access to potable water, adequate protein, education for their children, or medical care.

As artisans packed up their displays and disassembled their Market stalls when the market closed, Snell received word that the South Sudanese jewelry and beaded clothing makers had to rush back home. The Roots Project – representing 60 Sudanese artisans from 16 different tribal groups – had just won Market 2016’s Community Impact award, a recognition of how effectively the Project reaches across Sudan’s tribal divides to draw women and their families together. As soon as the beaders learned that street battles erupted back home—violence that involved anti-aircraft guns, attack helicopters, and tanks—they rushed to the airport to return to their communities. Most of the beaders are the sole income providers among their relatives. They were anxious to safeguard their families in a country where mothers often distribute their children to different refugee camps, to minimize the risk of losing them all.

Before they learned of the new outbreak, the South Sudanese entrepreneurs talked about using their new income and training to help aspiring artisans. But first, they planned to gather the top producers along with the most skilled elders to discuss how to widen their reach and generate more profit. Even in the chaos of ongoing conflict, they have likely returned home more confident They are now sub-Saharan Africa’s award-winning art entrepreneurs.