‘The Scenarios Are Endless’: MH370 Team Says It May Have Been Looking in the Wrong Place 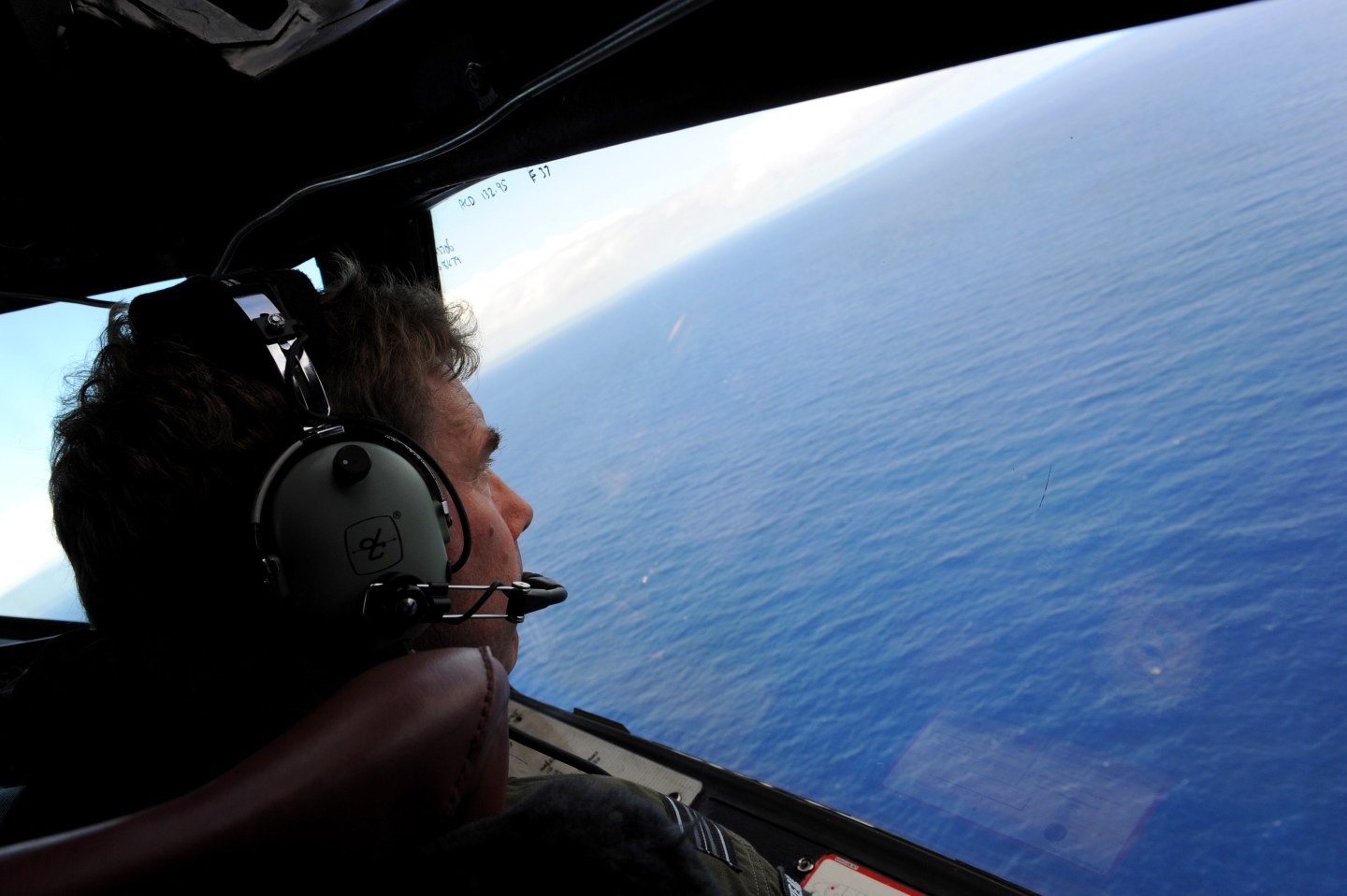 IN FLIGHT - APRIL 11: Co-pilot and Squadron Leader Brett McKenzie of the Royal New Zealand Airforce (RNZAF) P-3K2-Orion aircraft, helps to look for objects during the search for missing Malaysia Airlines flight MH370 in flight over the Indian Ocean on April 13, 2014 off the coast of Perth, Australia. Search and rescue officials in Australia are confident they know the approximate position of the black box recorders from missing Malaysia Airlines Flight MH370, Australian Prime Minister Tony Abbott said on Friday. At the same time, however, the head of the agency coordinating the search said that the latest "ping" signal, which was captured by a listening device buoy on Thursday, was not related to the plane. (Photo by Greg Wood - Pool/Getty Images)
Pool Getty Images

Top searchers at the Dutch company leading the underwater hunt for Malaysia Airlines jet MH370 say they believe the plane may have glided down rather than dived in the final moments, meaning they have been scouring the wrong patch of ocean for two years.

Flight MH370 disappeared in March 2014 with 239 passengers and crew onboard en route to Beijing from Kuala Lumpur. Searchers led by engineering group Fugro have been combing an area roughly the size of Greece for two years.

That search, over 120,000 square kilometres of the southern Indian Ocean off Western Australia, is expected to end in three months and could be called off after that following a meeting of key countries Malaysia, China and Australia on Friday.

The three countries agreed in April 2015 that should the aircraft not be located within the search area, and in the absence of any new credible evidence, the search area would not be extended. So far, nothing has been found.

“If it’s not there, it means it’s somewhere else,” Fugro project director Paul Kennedy told Reuters.

Kennedy does not exclude extreme possibilities that could have made the plane impossible to spot in the search zone, and still hopes to find the craft. But he and his team argue another option is the plane glided down – meaning it was manned at the end – and made it beyond the area marked out by calculations from satellite images.

“If it was manned it could glide for a long way,” Kennedy said. “You could glide it for further than our search area is, so I believe the logical conclusion will be well maybe that is the other scenario.”

Doubts that the search teams are looking in the right place will likely fuel calls for all data to be made publicly available so that academics and rival companies can pursue an “open source” solution – a collaborative public answer to the airline industry’s greatest mystery.

Fugro’s controlled glide hypothesis is also the first time officials have leant some support to contested theories that someone was in control during the flight’s final moments.

Since the crash there have been competing theories over whether one, both or no pilots were in control, whether it was hijacked – or whether all aboard perished and the plane was not controlled at all when it hit the water. Adding to the mystery, investigators believe someone may have deliberately switched off the plane’s transponder before diverting it thousands of miles.

The meeting between officials from China, Australia and Malaysia is expected to discuss the future of the search. The three governments have previously agreed that unless any new credible evidence arises the search would not be extended, despite calls from victims’ families.

Any further search would require a fresh round of funding from the three governments on top of the almost A$180 million ($137 million) that has already been spent, making it the most expensive in aviation history.

Deciding the search area in 2014, authorities assumed the plane had no “inputs” during its final descent, meaning there was no pilot or no conscious pilot. They believe it was on auto-pilot and spiralled when it ran out of fuel.

But Kennedy said a skilled pilot could glide the plane approximately 120 miles (193 km) from its cruising altitude after running out of fuel. One pilot told Reuters it would be slightly less than that.

For the aircraft to continue gliding after fuel has run out, someone must manually put the aircraft into a glide – nose down with controlled speed.

“If you lose all power, the auto-pilot kicks out. If there is nobody at the controls, the aircraft will plummet down,” said a captain with experience flying Boeing 777s – the same as MH370. Like all pilots interviewed for this story, he declined to be named given the controversy around the lost jet.

For more on aviation, watch this video:

Fugro works on a “confidence level” of 95 percent, a statistical measurement used, in Fugro’s case, to indicate how certain the plane debris was not in the area they have already combed, a seabed peppered with steep cliffs and underwater volcanoes.

“The end-of-flight scenarios are absolutely endless,” Fugro managing director Steve Duffield said. “Which wing ran out of fuel first, did it roll this way or did it tip that way?”

The Australian Transport Safety Bureau (ATSB), the agency coordinating the search, has consistently defended the defined search zone. It did not immediately respond to questions over whether it was assessing the controlled glide theory.

Authorities used data provided by Inmarsat to locate the likely plunge point through communication between the plane and satellite ground station.

“All survey data collected from the search for missing flight MH370 will be released,” an ATSB spokesman said.