The One Thing Republicans Don’t Want To Discuss This Week 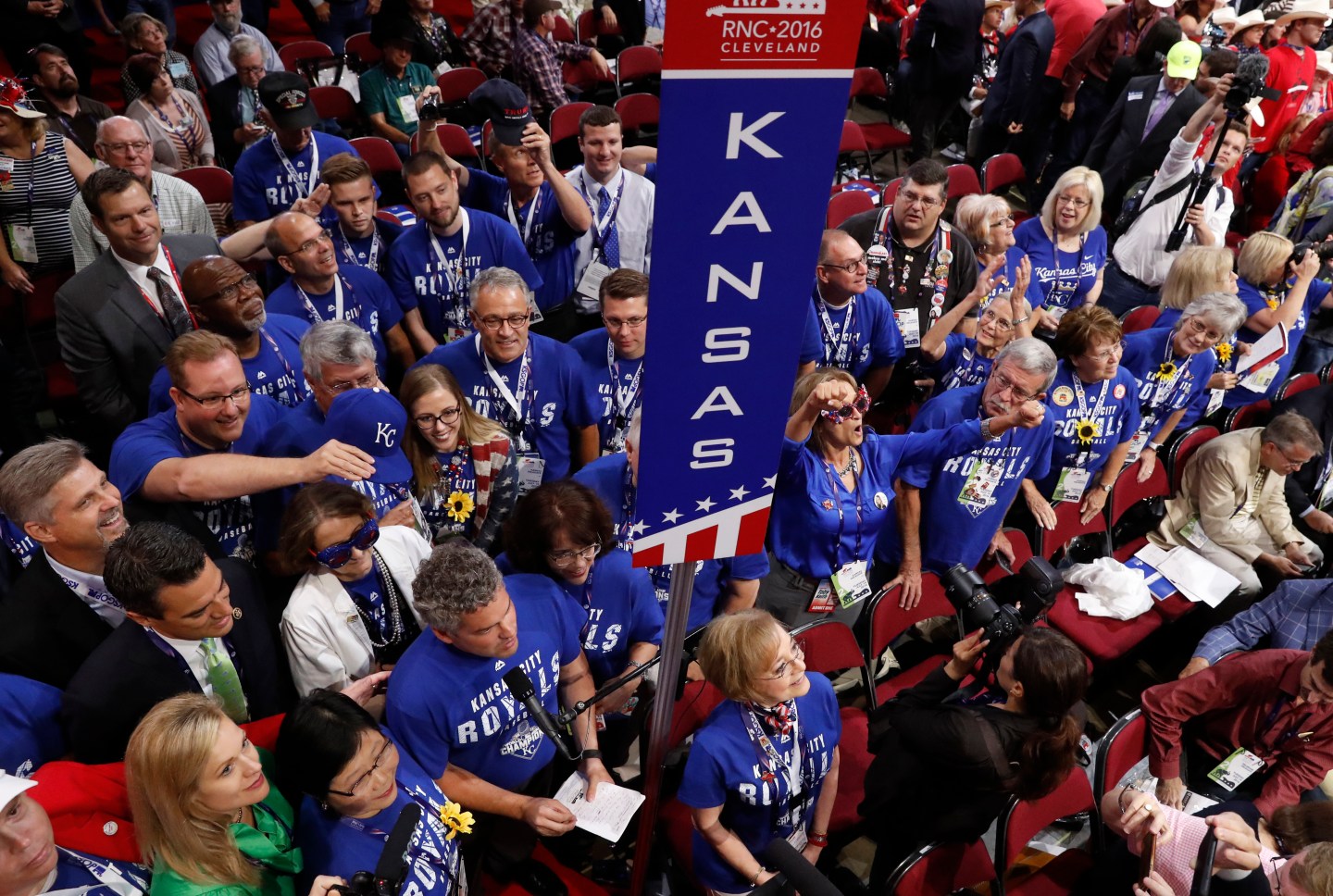 The Kansas delegation is seen on the floor of the convention as a roll call vote is held during the second day of the Republican National Convention in Cleveland, Tuesday, July 19, 2016. (AP Photo/Paul Sancya)
Paul Sancya — AP

During roll call on Tuesday at the Republican National Convention, many members of the Kansas delegation were wearing blue Kansas City Royals t-shirts. A bit odd, given that Kansas City itself is in neighboring Missouri, and roll call is when delegations usually extol the virtues of their own state.

To be sure, I’m not doubting these people’s devotion to their baseball team ― no matter where its park is technically located.

But it does bring up an uncomfortable fact for Republicans: Kansas, one of the reddest states in the nation, is in the midst of an economic emergency. And the RNC is trying to make sure no one thinks about it.

Check out what Wisconsin Gov. Scott Walker said, during his RNC address on Wednesday:

Obviously that’s not an exhaustive list of all 31 Republican governors’ states, but Kansas Gov. Sam Brownback ― once a presidential candidate ― arguably has turned more GOP doctrine into law than any of the others. From New York Magazine:

They passed massive tax breaks for the wealthy and repealed all income taxes on more than 100,000 businesses. They tightened welfare requirements, privatized the delivery of Medicaid, cut $200 million from the education budget, eliminated four state agencies and 2,000 government employees. In 2012, Brownback helped replace the few remaining moderate Republicans in the legislature with conservative true believers.

The result, however, has been anything but what Brownback promised. Kansas has the country’s second-slowest GDP growth rate (0.4%) for the three years ending 2015, and is one of just nine states to actually have negative GDP movement between Q4 2014 and Q4 2015. Unemployment is low, but job growth has been anemic. Tax collections have fallen short of projections in 22 of the 30 months ending this past May, prompting deep and sudden spending cuts in everything from highway infrastructure to education. A bipartisan coalition of four former Kansas governors is even raising money “to help educate Kansas voters about the destructive policies of Sam Brownback and his supporters in the Kansas legislature.”

But you won’t hear about Kansas here in Cleveland where, like at most political conventions, facts are cherry-picked to fit simplistic narratives. Maybe the Kansas delegation’s choice of clothing was an unintentionally subtle protest, a reminder that no one party really has all of the economic answers. A reminder that supporting your team doesn’t always make sense.