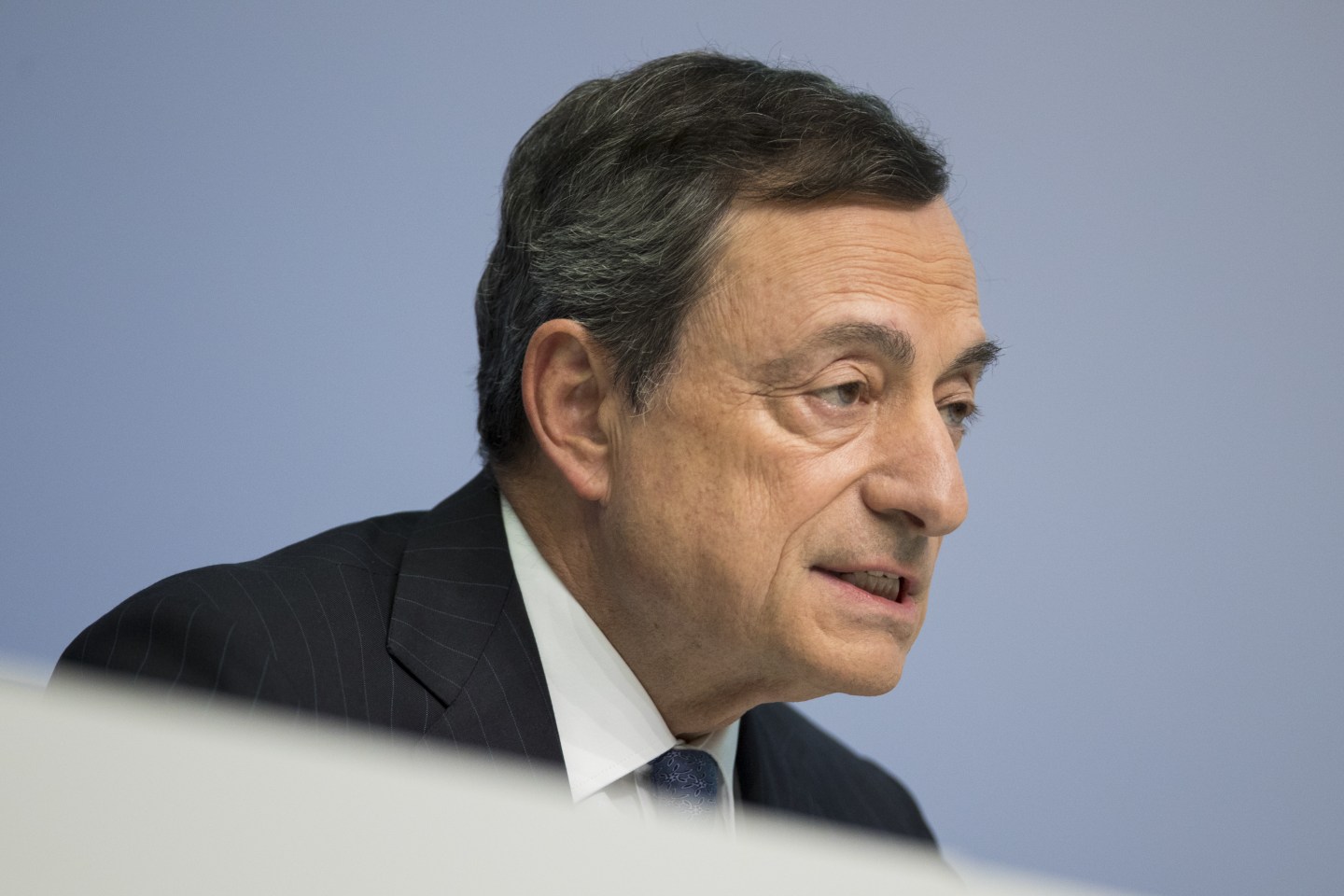 Mario Draghi, president of the European Central Bank (ECB), speaks during a news conference to announce the bank's interest rate decision at the ECB headquarters in Frankfurt, Germany, on Thursday, July 21, 2016. Draghi said the European Central Bank wont hesitate to add fresh stimulus if needed once it has a clearer picture of the economic impact from the U.K.s vote to leave the European Union. Photographer: Jasper Juinen/Bloomberg via Getty Images
Jasper Juinen — Bloomberg via Getty Images

In an otherwise low-key press conference, Draghi said that the availability of state bailouts to recapitalize banks was an important part of solving the problem of non-performing loans and restoring banks to a position where they could lend more freely to creditworthy customers.

“A public backstop is a measure that would be very useful,” Draghi said, although he made sure to qualify his comments by listing other essential measures.

A furious ideological row is brewing between Italian Prime Minister Matteo Renzi and the European Commission over the issue. Under new EU rules designed to remove the risk of taxpayers being put on the hook for bank failures, distressed institutions must first look for private sources of capital to get themselves out of trouble, then impose losses on their shareholders and creditors, before they get a cent from the state.

But no private investors (well, no truly private ones) are willing to take on the risk at the moment, and the creditors most vulnerable to being “bailed in” are to a large degree the banks’ own customers, thanks to years of the banks mis-selling subordinated debt as a high-yield, but essentially safe, product.

Renzi, who has staked his political future on a referendum on Italy’s electoral law in October, would rather not risk the fallout of “haircutting” pensioners, widows, and orphans. When he tried it last year, individual tales of woe–including the suicide by one defrauded investor–rapidly persuaded him to back down. A quicker, simpler way to get the bad loans off the books would be to borrow more from the government bond markets and inject the capital directly into banks that need it.

EU law on state aid does allow governments to invest in companies or banks if they can prove that a rational investor would do likewise. (Dan Davies, a senior research adviser with Frontline Analysts, argues that the main reason rational investors won’t touch Italian banks right now is the “overhanging threat of expropriation by the Commission,” rather than any sense that the banks are beyond rescue.)

According to some analysts, there is a loophole in the Bank Resolution and Recovery Directive that could allow for just that: the directive only applies to banks that regulators have identified as distressed. And what Draghi had to say on that point Thursday was also encouraging. He said that the banks’ problem was one of “low profitability, not solvency.”

But there may not be enough time to exploit that loophole: the ECB is due to announce the results of this year’s bank stress tests on July 29. Even though it hasn’t set a numerical pass/fail threshold for capital ratios this year, any outcome that suggests that a bank is undercapitalized will restrict Renzi’s ability to bail it out.

Draghi’s comments still don’t amount to a blank check for Italy. He also listed “a consistent supervisory approach, the development of a fully functioning non-performing loan market and government action in passing that legislation that would foster the development of an NPL market” as necessary. He said that the measures taken so far by Renzi were in the right direction, but that more needed to be done.

Draghi knows from past experience that giving Rome too much leeway can cost him his own credibility: when the ECB started buying Italy’s sovereign debt back in 2011 to ease the market pressure on Silvio Berlusconi’s government, Berlusconi reacted by withdrawing all the painful reform measures he had previously promised.

Earlier, the ECB had left its official interest rates at their record low level Thursday, as expected, and also held off from adding to its “quantitative easing” program of bond-buying. It repeated, however, that the risks to the economic outlook are mainly to the downside, and that looser policy is more likely than a tightening for at least the next eight months.

The ECB’s stance contrasts with that of the Federal Reserve, which is trying to bring interest rates back to a more normal level after nearly a decade of ultra-loose monetary policy.

Like the Bank of England last week, the ECB decided to wait until it had more hard data before deciding whether Britain’s vote to leave the EU had damaged the European economy so badly that monetary stimulus was needed. The EU Commission warned this week the Brexit vote could take up to 0.2 percentage points off Eurozone GDP this year, and as much as 0.5% next year. But Draghi said that the eurozone’s financial markets had weathered the initial shock from the Brexit vote with “encouraging resilience.”