Donald Trump Goes Missing in Cleveland, Along with GOP Unity 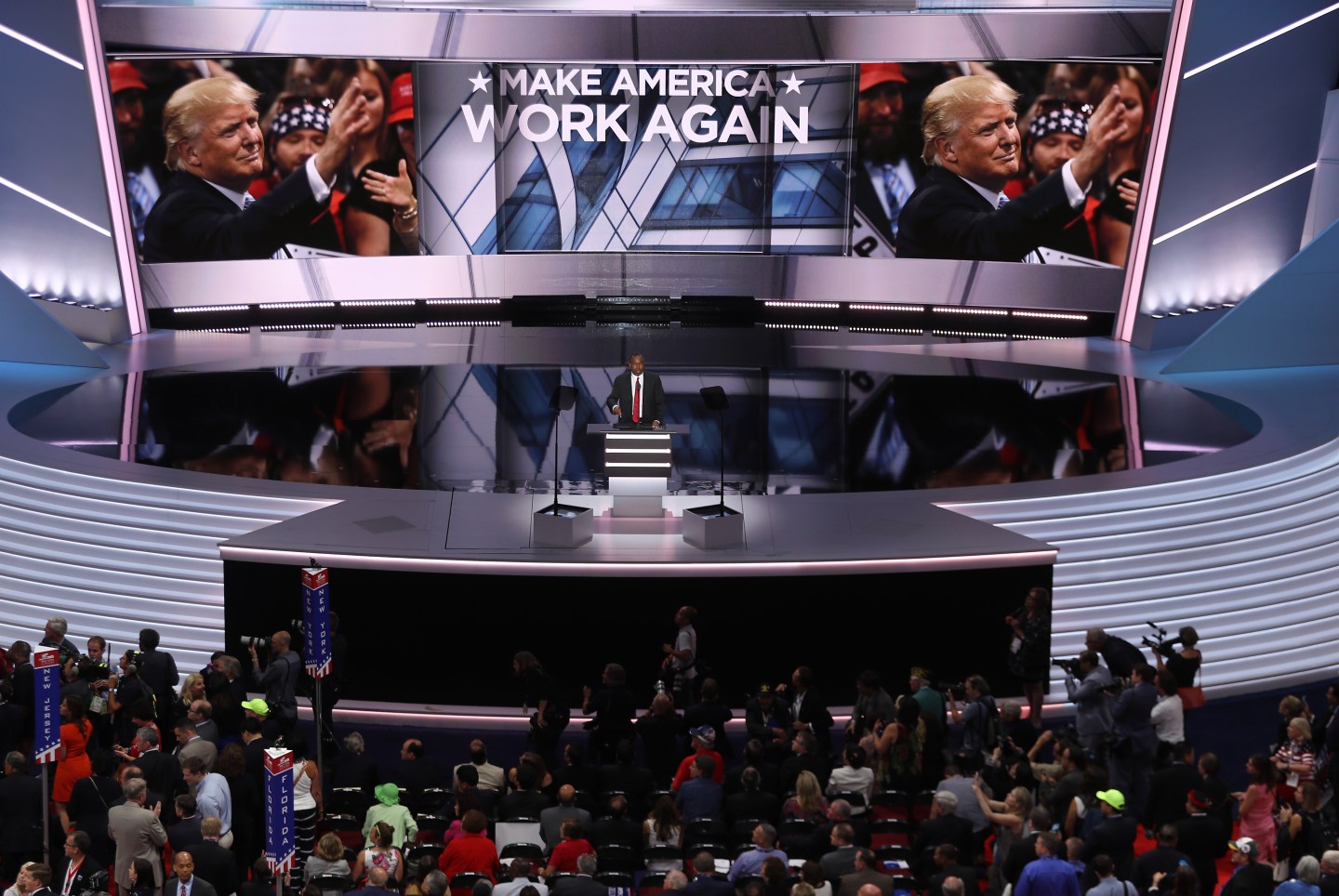 Donald Trump was oddly absent, physically and notionally, from his own convention on the day he made history by securing the Republican presidential nomination.

The no-longer-presumptive nominee appeared via satellite in Cleveland’s Quicken Loans Arena to deliver an uncharacteristically brief version of his boast-cum-stump speech. Trump could only make himself available remotely because he flew back to New York after showing up in person Monday to introduce his wife, Melania. Her speech — or rather the portions of it lifted from Michelle Obama’s 2008 convention address — soured the opening night of the Republican gathering and dominated conversation all day on Tuesday. So the candidate needed some help from his Day 2 primetime lineup to help turn the page.

Did they deliver? It depends on when you tuned in.

Indeed, the second night of the convention continued a theme established on the first: The event has felt bifurcated. On the one hand, Trump’s hand-picked intimates have offered enthusiastic endorsements of his candidacy, On the other, those recognizable names from the GOP establishment who bothered to show up have mostly avoided mentioning their nominee and have focused instead on the need to defeat Hillary Clinton or protect Republican margins in Congress. To that end, on Tuesday, two of Trump’s children, especially his eldest son, Donald, Jr., accomplished what Melania did not by offering humanizing insights into their father as a devoted family man. But they only took the stage after Senate Majority Leader Mitch McConnell and House Speaker Paul Ryan gave their own talks that all but ignored Trump himself.

Both McConnell and Ryan have been explicit in their criticism of Trump’s challenges to conservative orthodoxies and his frequently divisive rhetoric. On Tuesday, they both did their best to steer clear of their nominee altogether. McConnell mentioned Clinton five times more often than he invoked Trump. And Ryan — the Republican vice presidential nominee in 2012 and for many during this election cycle considered the last, best hope to displace Trump atop the ticket — barely mentioned him at all (precisely twice in a 12-minute speech).

The Speaker’s speech was rich with subtext. At times, it scanned like an argument Ryan was making to himself to reconcile his support for a candidate he clearly loathes: “Democracy is a series of choices,” he said. “We Republicans have made our choice.”

At others, it seemed like a thinly veiled exhortation to Trump himself to wage an entirely different sort of campaign, based on ideas rather than insults. “Whatever we lack going into this campaign, we should not lack for motivation. In the plainest terms I know, it is all on the line. So let’s act that way,” he said. “Let’s use the edge we have because it is still what earns the trust and the votes…. Let’s take our fight to our opponents, with better ideas.”

Donald Trump, Jr. followed up later in the program with a stirring testimonial to his father as a figure who instilled a blue-collar work ethic in his children despite their billionaire comforts. But it was equally remarkable in its demonstration of just how scarce such endorsements of the candidate have been so far. Halfway through an event that Trump desperately needs to give his campaign a boost, the enduring picture is of a party still deeply ambivalent about his candidacy.