These Are the Best Ways to Invest After Brexit 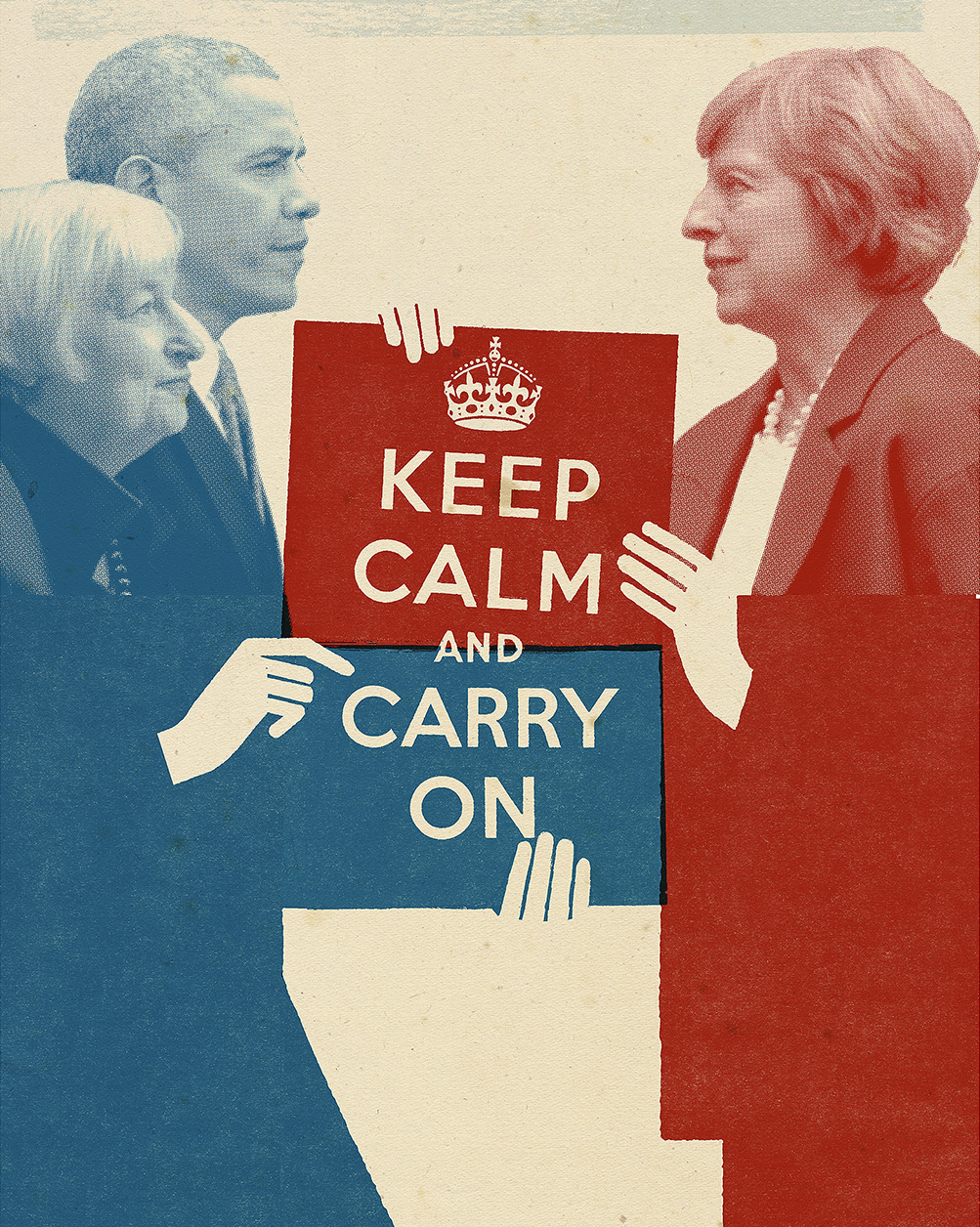 “Brexit,” in which U.K. voters defied the prognosticators and chose to leave the European Union, set off shock waves that could very well have a global economic impact. But the reaction among stock investors, in the words of a slogan coined by the British government during World War II, has been “Keep calm and carry on.”

While stocks in the U.S. and most of Europe fell sharply immediately after the June 23 referendum, they rebounded almost as quickly. Within three weeks of the vote, the S&P 500 reached record peaks; the Stoxx 600, a broad Europe-wide index, made up almost all of the 11% it lost immediately after Brexit; and Britain’s FTSE 100 index was flirting with a 52-week high.

Still, the cheery news conceals a current of genuine worry. In interview after interview, investors told Fortune they were jolted by Brexit’s long-term implications. “You had 15 to 25 years of increased globalization, [and] the equity markets and global economy benefited from that,” says Matt Kadnar, a portfolio strategist at investing ­giant GMO. If Brexit-like sentiment in ­other nations leads to restrictions on the flow of trade and labor, he adds, “that is going to ­create greater uncertainty and volatility”—at a time when some commentators believe that global stock and bond prices are overdue for a tumble.

That said, few money managers believe Brexit will create immediate problems for investors. On the contrary, most think reactions to the vote are creating pockets of opportunity. Their broader advice: Remain alert for future geopolitical shocks—but stay invested. Here are three of the biggest trends they’re acting on.

The retreat to America. As the S&P 500’s rally suggests, the political upheaval in the U.K. has only enhanced the appeal of the U.S. economy and U.S. stocks. “We have a healthy and functioning financial sector,” says Erik Knutzen, multi-asset-class chief investment officer at Neuberger Berman. “We have real areas of entrepreneurship and a dominant tech sector, and our companies adapt the most rapidly to changing conditions.”

American companies also have relatively little exposure to European economic weakness. The U.S. is actually a net importer from the European Union, notes Vadim Zlotnikov, co-head of multi-asset solutions at AB (formerly AllianceBernstein). Germany is the U.S.’s biggest European trade partner but accounts for only about 4% of U.S. exports, while exports to the U.K. constitute just 0.6% of U.S. GDP. Given those numbers, the threat to the U.S. from a European meltdown seems easy to contain.

Still, the Brexit vote has encouraged the Federal Reserve to put interest rate increases on hold. That in turn could help boost corporate earnings growth, which has been mediocre of late. Lower rates should continue to spur consumer spending and encourage lending, notes Scott Minerd, global chief investment officer at Guggenheim Partners.

For more on investments, watch this Fortune video:

The bottom line: Investors should maintain their exposure to large U.S. stocks, ideally through inexpensive vehicles like the Vanguard S&P 500 exchange-traded fund (VOO), which has an expense ratio of only 0.05%. But those looking for a more targeted stock play should consider:

The search for yield. At a time when investors expect stocks to be more volatile, “income is going to be increasingly important,” says Richard Turnill, global chief investment strategist for BlackRock (BLK). The problem: Partly because of Brexit, it’s harder than ever to get that income from bonds.

The Brexit vote sent investors scrambling to buy the security of government bonds—driving up their prices and depressing their yields when both were already near historic extremes. Rates on government bonds in Germany and Switzerland fell further into negative territory after Brexit, while yields on 10-year Treasuries dropped below 1.5% and touched record lows.

Check out “Choose Your Own Brexit Adventure” for more.

Luciano Siracusano, chief investment strategist at ETF and index developer WisdomTree (WETF), says the 1,400 dividend-paying stocks in the company’s WT Dividend index now have average yields of about 3%, twice the yield of 10-year Treasuries. Income-hungry investors have already driven up the prices of many of those stocks, however; the WT index is up 10% this year, compared with a little over 5% for the S&P 500.

“All you need is a handful of companies to move to Ireland from the U.K. to have a big impact.”

Tiptoeing into Europe. Europe, of course, is where fears of Brexit’s economic impact are most acute, as investors agonize over what Britain’s departure could do not only to its own economy, but also to the rest of the EU.

The recent rally of Britain’s FTSE index isn’t a great indicator of that country’s economic prospects, investors say. After the Brexit vote, Britain’s pound fell to a more than 30-year low against many foreign currencies. Stephen Peak, manager of the Pan European and International funds for Henderson Global Investors, says the currency plunge effectively bifurcated the British stock market. Multinationals like British American Tobacco (BTI) and Diageo (DEO), which should benefit from a weaker pound, have run up, while domestically focused companies, especially in consumer discretionary companies and real estate, have been clobbered by investors who fear a ­British recession.

That trend has left the multinationals less attractive and made the consumer-­oriented ones look enticing, say Peak and Bill Kennedy, manager of the Fidelity International Discovery Fund. Both managers plan to hunt for bargains in the latter category, or potentially add to their current positions in such stocks, once the post-Brexit dust settles. “There are high-quality domestic-sensitive companies that have been beaten up,” says Kennedy.

The recent selloff has widened a long-standing gap between the relative prices of stocks on the European continent and those in the rest of the world. Excluding British stocks, European equities now trade at 14.4 times forward earnings, compared with 16.6 times for the MSCI World index and 18 times for the S&P 500. Since 1999, the median discount for European stocks relative to the rest of the world was 8%; today it’s about 13%. For bargain-hunting investors, Zlotnikov says, “it gives a little bit of a cushion.”

An EU Loss Could Be Their Gain

The Brexit vote has underscored Europe’s general economic dysfunction, but investors still see some promise in these European markets.

Among Continental economies, Peak sees promise in Spain (see above). While the country was one of Europe’s biggest trouble spots after the Great Recession and financial crisis, the economy could grow close to 3% this year, as the property market and banking sector continue to improve. Further north, Kennedy says, Ireland will benefit from Brexit in part by attracting British companies that want to remain in an EU nation. Ireland offers low taxes and a lower cost of living than the U.K., and since it’s small, “all you need is a handful of companies to move … to have a big impact,” Kennedy notes.

ETFs are the most cost-efficient way to play these trends. But Siracusano of WisdomTree reminds U.S.-based investors that exchange-rate fluctuations could erode returns if, say, the euro plunges further against the dollar. A growing number of ETFs hedge against this currency risk, including iShares Currency Hedged MSCI United Kingdom (HEWU), which tracks large- and mid-cap U.K. companies, and iShares Currency Hedged MSCI Spain (HEWP), which focuses on large-cap companies. (For would-be investors in Ireland, there’s the iShares MSCI Ireland Capped ETF (EIRL), which tracks Irish equities but is not hedged.)

Most investors we talked to added a big caveat about their post-Brexit plans: Unforeseen political wrinkles could force them to change course. Guggenheim’s Minerd calls Brexit “the biggest sea change on global collectiveness since the end of the Second World War.” And that sea change could yet create treacherous tides.

A version of this article appears in the August 1, 2016 issue of Fortune with the headline “Where to Invest After a British Breakup.”