Years After Obama’s Message of ‘Hope’ and ‘Change,’ Americans Are Angry and Frustrated 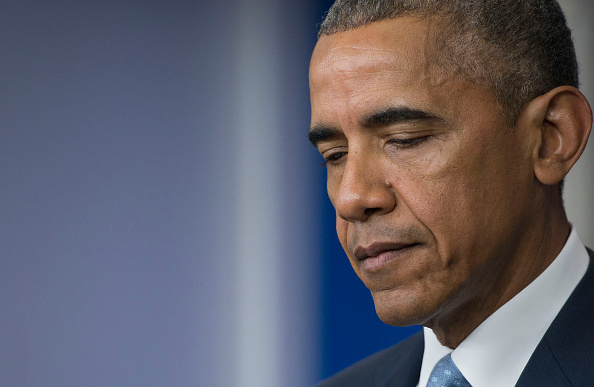 Eight years ago, Barbara Conley was one of the millions of Americans swept up in Barack Obama’s promises of hope and change when he accepted the Democratic nomination at a packed football stadium a few miles from her home in the Denver suburbs.

But those optimistic days are almost unrecognizable to Conley now.

With Donald Trump and Hillary Clinton preparing for their own nominating conventions, the 68-year-old independent is filled with so much frustration at the candidates and the political system that propelled them to victory that she can’t even imagine voting in November.

“I’m so mad about both of the candidates,” said Conley, who finds Clinton too dishonest and Trump too unproven to be president. She paused while loading groceries into her car and declared, “It’s depressing.”

Less than four months before Election Day, that same sense of anger and anxiety runs deep with voters across the country. Trump and Clinton will each try to paint a rosy picture of life under their leadership during their back-to-back conventions, but it seems unlikely either can quickly shake Americans out of their bad mood.

A stunning 79 percent of Americans now believe the country is heading in the wrong direction, a 15-point spike in the past year, according to an Associated Press-GfK poll. Voters are strikingly unhappy with the candidates who will be on the ballot this fall, with only 22 percent saying they would be proud to see Trump win and 27 percent to see Clinton.

Kristie Boltz, a registered Republican from Black Lake, Ohio, said a choice between Clinton and Trump is so unappealing that she would rather Obama stay in office for a third term.

“And I didn’t even vote for Obama. How crazy is that?” said Boltz, a 39-year-old who works in marketing.

By some measures, America’s palpable pessimism can appear at odds with the country’s economic and security standing.

The economy is growing, jobs are being created and unemployment is low. Tens of thousands of American troops have come home from dangerous war zones during Obama’s presidency. Crime is down nationwide.

But the improving economy is no doubt a changing one, leaving some Americans without the skills they need for the jobs available. Terrorism fears have been heightened in the U.S. after a string of deadly incidents in the West.

This summer in particular has seemed to bring a steady stream of gruesome news.

A mass shooting at an Orlando nightclub left 49 people dead, as well as a gunman who pledged his allegiance to the Islamic State militants despite no formal ties to the group. Shootings by police of black men in Louisiana and Minnesota were captured on video, followed by the murder of five police officers in Dallas.

The incidents seemed to momentarily spark national soul searching about gun violence and race relations. But as Americans looked toward the presidential candidates and other political leaders, some saw little sign of readiness to meet a challenging time.

Emilie Passow, a 68-year-old Democrat from Bala Cynwyd, Pennsylvania, said her disgust extends beyond the presidential candidates to Congress as well. “There’s so little attempt at conciliation and consensus,” she said.

More than any other candidate in this election, Trump has latched onto the public’s fears. He promises to “Make America Great Again,” pledging to bring back manufacturing and mining jobs from areas where they’ve disappeared. With coded — and sometimes not so coded — language, he’s cast aspersions on immigrants seeking to come to the United States and on Muslims already here.

While Trump supporters cheer those lines, they leave other voters on edge.

Melissa Andreas, 42, said of the prospect of a Trump presidency: “I’m scared that our country is going to be in utter turmoil with him as our leader.”

Mike Ryan shares many of those sentiments about Trump. But his view of Clinton isn’t much better.

Like his fellow Coloradan Barbara Conley, some of Ryan’s feelings stem in part from his frustrations with Obama’s eight years in office. Though Ryan supports Obama, he’s been irritated by the years of battle between the Democratic president and Republican lawmakers that have often ended in stalemate.

Asked whether he believes Clinton — or Trump — could do any better, Ryan said simply, “I’m disappointed with what we’re left with.”