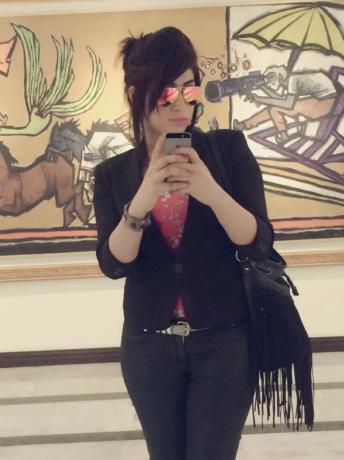 Social media celebrity Qandeel Baloch, who was strangled in what appeared to be an "honour killing," in Multan, Pakistan, is pictured in a selfie on her Facebook page. Qandeel Baloch/Facebook/via Reuters
STRINGER

The brother of Qandeel Baloch, whose risqué social media posts both titillated and appalled conservative Pakistan, on Sunday admitted to strangling her in a crime that reignited debate about so-called “honor killings” in the South Asian nation.

Muhammad Waseem said he gave a “tablet” to Baloch to subdue her and then strangled her in their family home over the weekend.

“I have no regrets,” he told journalists in a press conference arranged by the police early on Sunday.

The killing sent shockwaves across Muslim Pakistan and triggered an outpouring of grief on social media for Baloch, whose real name was Fauzia Azeem.

Violence Against Women Could Cost the U.S. $500 Billion a Year

In Facebook (FB) posts, Baloch, 26, spoke of trying to change “the typical orthodox mindset” of people in Pakistan. She faced frequent misogynist abuse and death threats but continued to post provocative pictures and videos.

“As per our initial investigation ‘honor’ is the motive of murder,” said Azhar Ikram, the police chief in Multan, where Baloch was killed.

More than 500 people—almost all women—die in Pakistan each year in such killings, usually carried out by members of the victim’s family meting out punishment for bringing “shame” on the community.

Waseem said he killed his sister due to her social media activities, which included a series of posts with a prominent Muslim cleric, Abdul Qavi. One video shows her sitting on the cleric’s lap.

Qavi, who was suspended from a prominent Muslim council in the controversy following the posts, told local media after Baloch’s death he had “forgiven her” and the matter was now in God’s hands.

After Baloch’s death, many Pakistanis again called for the passage of an anti-honor killing law, aimed a closing a loophole that allows family members to forgive the killers.

“The death of Qandeel Baloch conveys an insidious message: that women will be kept back at all cost; murdered, if they dare nurture ambitions to break the glass ceiling,” the English daily Dawn newspaper wrote in an editorial on Sunday.

“Her murder…must serve as an impetus for legislators to renew demands for legislation to protect women who are threatened under false notions of ‘honor’.”

Baloch, who called herself a modern day feminist, was described as Pakistan’s Kim Kardashian and built a modeling career on the back of her social media fame.

For more on empowering women, watch:

She also appeared in a music video, gyrating bare legged to an Urdu-language song in high-heels and a see-through top.

On social media, some celebrated her killing as she had been a “disgrace” to Pakistan’s culture.

But many grieved her death, saying she had helped the cause of women in a society where they are often banned from working or even appearing in public in ultra-conservative areas.

“There are far too many people who only know how to respond with violence here,” Meesha Shafi, a Pakistani model and actress, said on Twitter (TWTR).