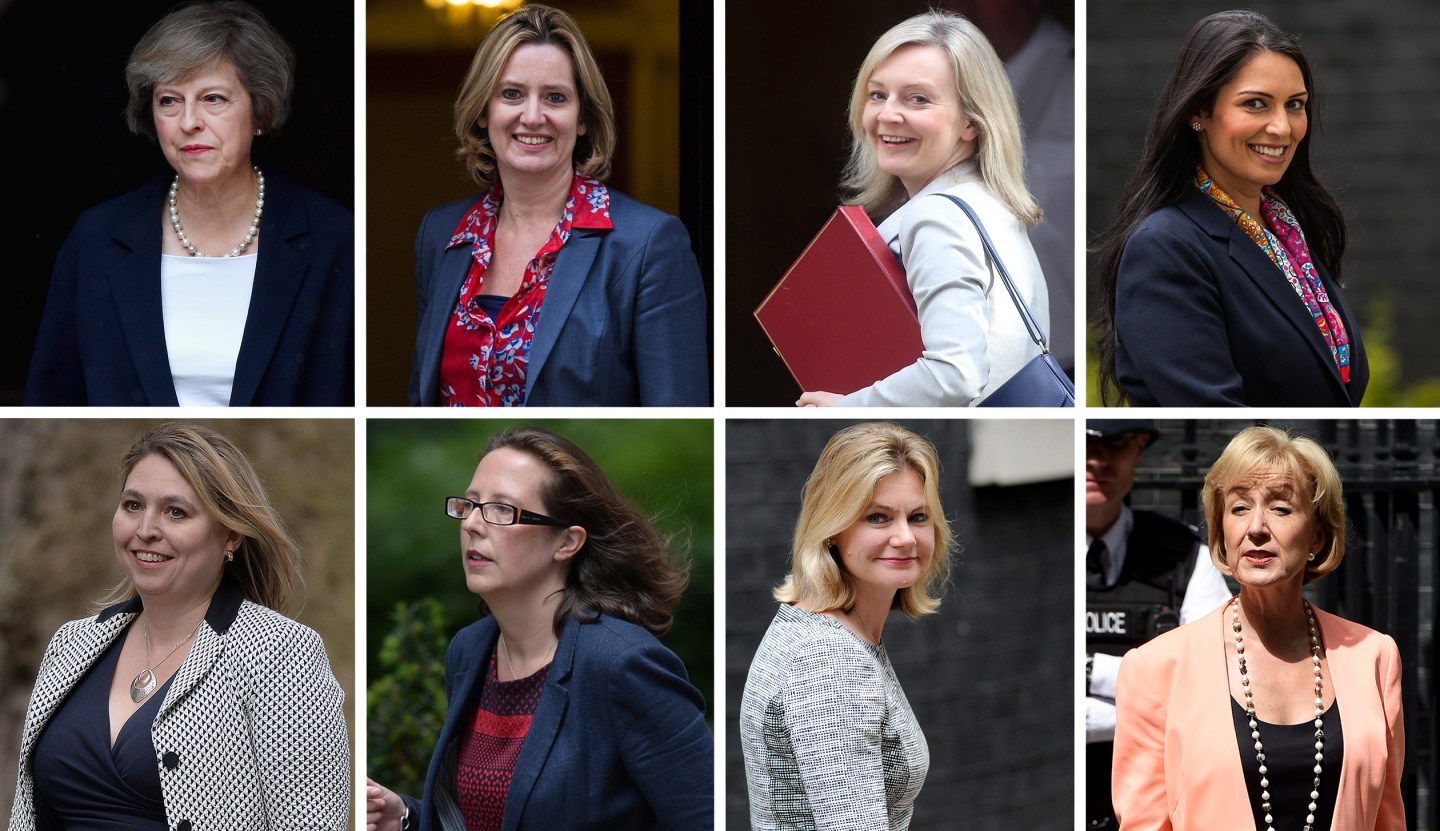 As Britain’s second women prime minister, Theresa May is—not surprisingly—drawing comparisons to the first. Just one day into the job, May’s already outdone her only female predecessor Margaret Thatcher by one measure: she appointed seven women to her cabinet on Thursday who will make up about 30% of her closest advisors. In her time as PM from 1979 to 1990, Thatcher selected only one female secretary.

May filled her previous role of Home Secretary with Amber Rudd, the former energy and climate change secretary. She also selected Liz Truss—formerly the secretary for environment, food, and rural affairs—to become justice secretary, and former international development secretary Justine Greening to head the education department. (Greening, notably, is openly gay.) Priti Patel is the new secretary of international development, Karen Bradley will oversee culture, media, and sport, while Natalie Evans will take over as the new Leader of the Lords. May even gave a cabinet slot to Andrea Leadsom, her one-time, short-lived rival for Conservative Party head; she’ll be secretary of the environment.

Including May, the U.K. cabinet now has eight women among its 23 positions, which includes the newly-created role of Brexit secretary. Former Prime Minister David Cameron’s cabinet had seven women and 15 men.

May, who founded a group called Women2Win that aims to elect more Conservative women, was expected to give many of her administration’s top jobs to female colleague but the make-up of her roster is still notable compared to female representation in cabinets worldwide. Data from the United Nations shows that in 2015, 17% of all cabinet ministers were women, and most of them were concentrated in departments pertaining to education and family. Twenty-two percent of all national parliamentarians were female, up from 11% from 20 years prior.

At the same time, the gender break-down of May’s cabinet falls short of the slate of advisors compiled by Prime Minister Justin Trudeau of Canada and the one that’s been promised by presumptive Democratic presidential nominee Hillary Clinton. In November, Trudeau appointed a cabinet whose 30 positions were split 50-50 between men and women. He said it was important to present Canada with “a cabinet that looks like Canada.” Clinton has said that if she wins the presidency, she plans to fill her cabinet with as many women as men.

Beyond gender and professional aptitude, May also faced the challenge of considering her advisors’ Brexit affiliations. The June 23 vote, through which Britain decided the leave the European Union, created a deep chasm in the Conservative party, and was followed by an extraordinary bout of , infighting between the most prominent Tories in the Leave campaign. May’s selection of seven so-called Brexiteers and 15 Remainers was seen as an attempt to mend that divide and respect the voter mandate to cut ties with the EU. May herself supported staying in the EU, though she did so subtly. May also strove to include as many people educated in the state school sector, rather than the elite private schools whose pupils generally dominate British governments.

With all those factors to consider, May still managed to put together a relatively diverse cabinet. And while she hasn’t harped on being Britain’s second-ever female prime minister, it matters and so does her appointment of female secretaries, since—as the UN data shows—women are still sorely underrepresented in world governments and there’s evidence that female advances at the highest levels of government tend to inspire other women to run.