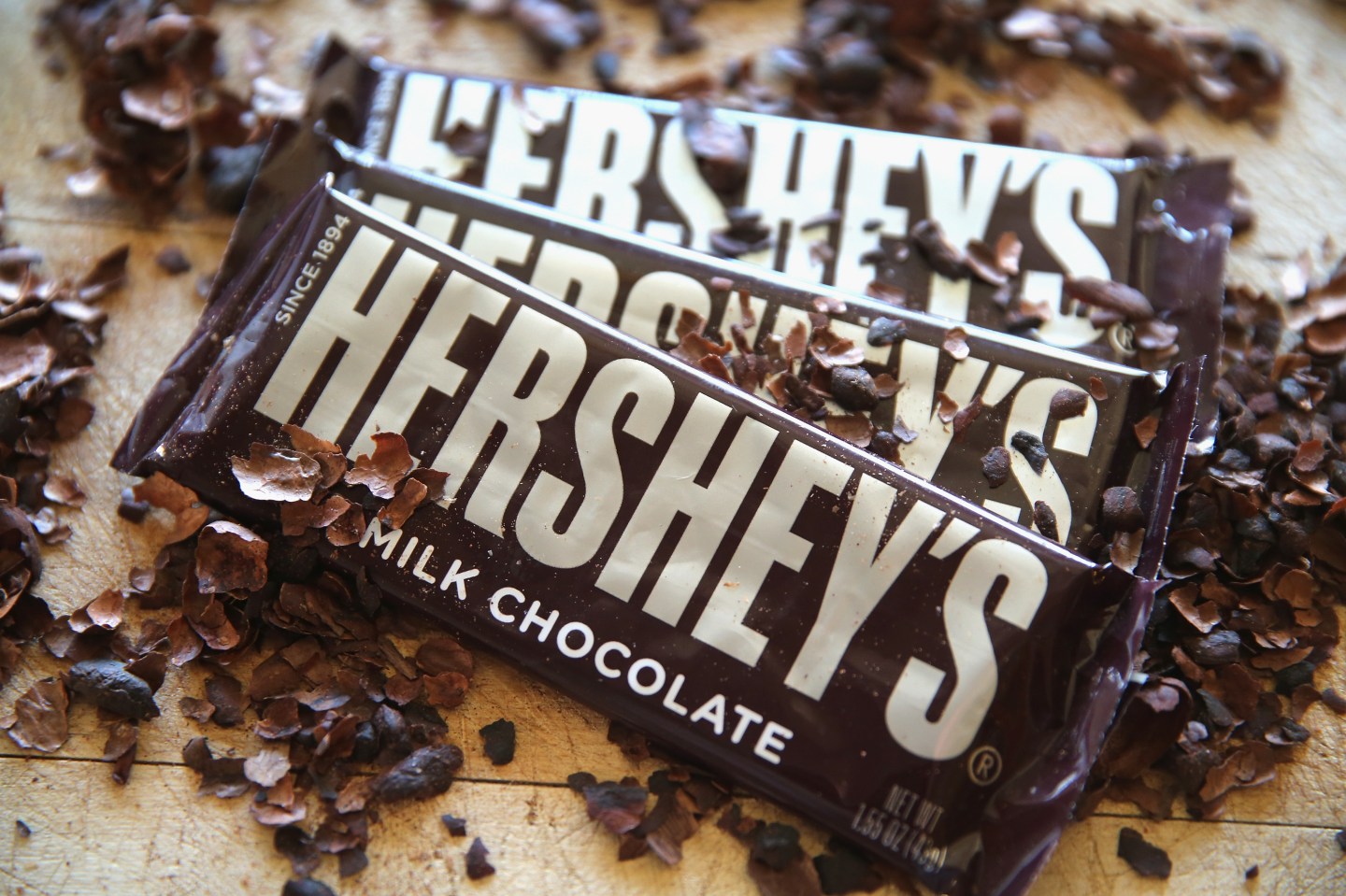 Hershey's chocolate bars are shown on July 16, 2014 in Chicago, Illinois. Hershey Co., the No.1 candy producer in the U.S., is raising the price of its chocolate by 8 percent due to the rising cost of cocoa. This is the company's fist price increase in three years. (Photo Illustration by Scott Olson/Getty Images)
Photograph by Scott Olson Getty Images

Mondelez (MDLZ), which ranks No. 94 on the Fortune 500, generates $29.6 billion in revenue while No. 362-ranked Hershey booked $7.4 billion in revenue. Impressively, Mondelez has seven “billion dollar brands,” as well as 51 brands that generate $100 million or more annually.

For now, Hershey (HSY) has rejected the offer, saying the board and executive management team has “determined that it provided no basis for further discussion between Mondelez and the company,” but there’s still a lot to be said about what this deal could mean. Fortune has dived into five important points.

1. Investors are still hopeful for a Hershey takeover

The deal price is valued at $107 a share and even with Hershey’s move to reject the bid, investors are hopeful an eventual takeover is successful. The stock ended Thursday’s trading at $113.46, up 17% for the day and the highest value ever for the company. Hope for more consolidation in the food industry led to notable stock gains on Thursday for a number of players in the space, including General Mills (GIS), Kellogg (K), B&G Foods (BGS), and fellow chocolate maker Tootsie Roll (TOOTSIE-ROLL).

2. The Milton Hershey Trust is a takeover barrier

This trust ensures that no hostile bid can be successful as it controls 80% of the votes. Some analysts have thus speculated that Mondelez’s ultimate strategy is a defensive one, as the company might fear it could receive its own hostile bid. Consumer goods analyst Pablo Zuanic argues that there is “nothing wrong with Mondelez wanting to be a consolidator in confectionery or biscuits.” In fact, the Susquehanna International Group analyst says he supports category consolidators though he warns the integration track record for Mondelez has been “uh, mixed….”

Wall Street has seen a lot of big blockbuster deals squashed by the Obama administration in recent years, but observers were quick to point out that a Mondelez-Hershey deal—if Hershey were to get on board—would likely not be subject to such intense scrutiny. Why? Regionally, the companies don’t overlap too much. At Hershey, nearly 88% of total revenue comes from the North American market. Mondelez only derives 24% of revenue from that region; Europe is a far larger market for the snacking giant, and it has sizable operations in the Latin America and Asia Pacific regions.

Mondelez ended up nabbing a spot on Fortune‘s 10 companies with the biggest profit spikes last year, as profit soared to $7.3 billion last year from $2.2 billion due to a $6.8 billion one-time gain related to the company’s move last summer to unload coffee brands in exchange for cash and a 49% stake in a new firm called Jacobs Douwe Egberts. But the loss of that business has left a huge hole in Mondelez’s top line. Revenue tumbled 16.8% in the first quarter of this year. Analysts are projecting a 10% drop in revenue for the full year.

5. Hershey could be attractive to other suitors

If the tie-up with Mondelez doesn’t work out, some analysts say other suitors might be waiting in the wings. Zuanic named a few other possibilities, including Nestle (often seen as a potential acquirer of Hershey), as well as Kellogg, PepsiCo (PEP) and even possibly 3G, though the latter firm is likely a long shot. Hershey is an attractive target partly because the global $100 billion chocolate market remains fragmented. While the top six firms command 60% global share, according to Euromonitor, the top three companies only have 38% share.