Here’s Why Kellogg Is Opening an All-Day Cereal Cafe 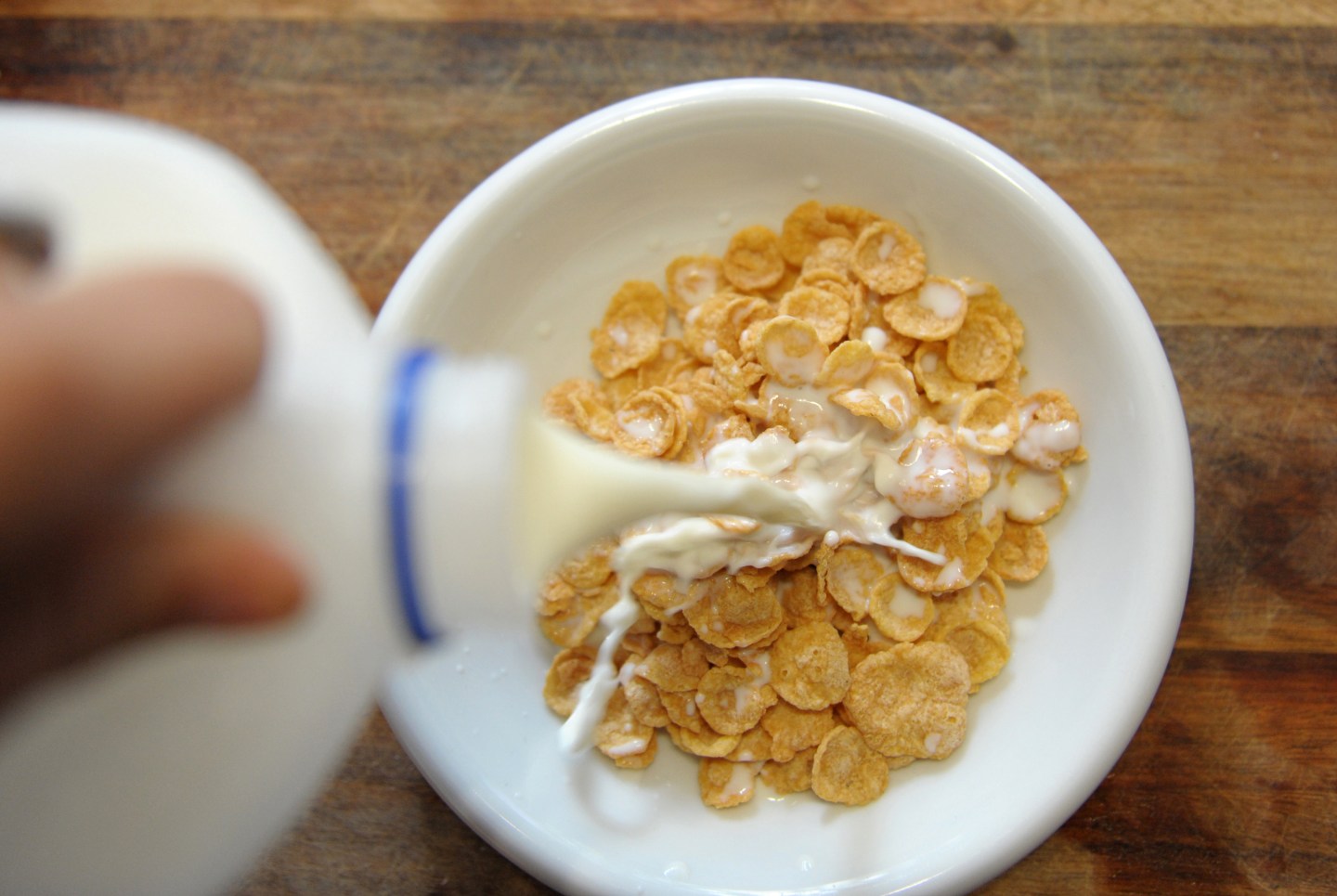 Would you be willing to pay $7.50 for a bowl of cereal? Kellogg (K), the maker of your favorite childhood cereals like Rice Krispies, Frosted Flakes and Fruit Loops, thinks you will. On July 4, the company will open its first-ever cafe in Times Square.

The company teamed up with Christina Tosi, the chef and owner of the Milk Bar bakeries in New York, Washington D.C., and Toronto to come up with some unique options to add to your cereal. Frosted Flakes can now be paired with toasted pistachios, lemon zest, and thyme. You can get ice cream topped with Rice Krispies, strawberries and the increasingly popular matcha powder.

Each bowl comes with a 12-ounce container of milk. If you want to add yogurt, that’s an extra $2, as is adding soft-serve ice cream.

Customers will then pick up orders via a set of “kitchen cabinets” and will find their food inside the door. Just like in a box of cereal, there will be a “prize” when customers pick up their cereal. Most days, it will be a small treat— like a plastic ring or a morning newspaper. However, there’s also plans in the works to give away tickets to the Broadway hit “Hamilton,” according to the Wall Street Journal.

Unlike the flashier themes found at other Times Square outlets like Mars Inc.’s M&M Store, the Kellogg’s cereal cafe will have none of that. According to the Journal, the company paired with Anthony Rudolf, the former director of operations for chef Thomas Keller’s New York restaurants and founder of Journee, a members-only organization for restaurant professionals, to create a “sleek, intimate space” for customers.

But giving the midtown cafe a minimalist feel goes beyond just surface-level aesthetics. Fortune has previously reported that cereal sales are getting crushed due in large part to Millennials; apparently, cereal takes too much energy for the 20-somethings to eat. Why? Because the bowl has to be cleaned afterwards.

Making the cereal cafe fast, available for immediate consumption, and reducing any work for Millennials will be one of the biggest challenges for the cereal cafe, Neeli Bendapudi, the incoming provost and executive vice chancellor and professor of marketing at the University of Kansas, told Fortune. It seems as though Kellogg has gathered as much, as it announced it will begin selling its cereal as a grab-and-go snack food.

However, the true appeal of Kellogg’s cafe—and what may determine its success—will be how customizable Millennials will find the new cafe, Bendapudi said.

“Being able to customize the cereal and make it their own, that will be the true appeal, she said. “[Kellogg] needs to create something that they will want to put on Instagram. This is a generation that really wants customization in everything they do.”

Cereal sales fell to about $10 billion for 2015, which is down from $13.9 billion in 2000. The research firm Euromonitor expects sales to continue falling, but food executives and other analysts believe there could be a comeback. Regardless, cereal sales are hurting, and opening an all new, never-been-done-before cereal cafe just might help boost the sales.

Kellogg may be looking at Chobani for an example of how this strategy can work. According to the Journal, the Greek-yogurt company has seen its sales grow 40% since it first opened its 400 square-foot space SoHo cafe in New York. The original cafe was opened in 2012, and doubled the size the following year and will do so again this year.

Fortune has reached out to Kellogg for a statement and will update the story if it responds.