The Man Who Built Simplehuman Into the Apple of Houseware 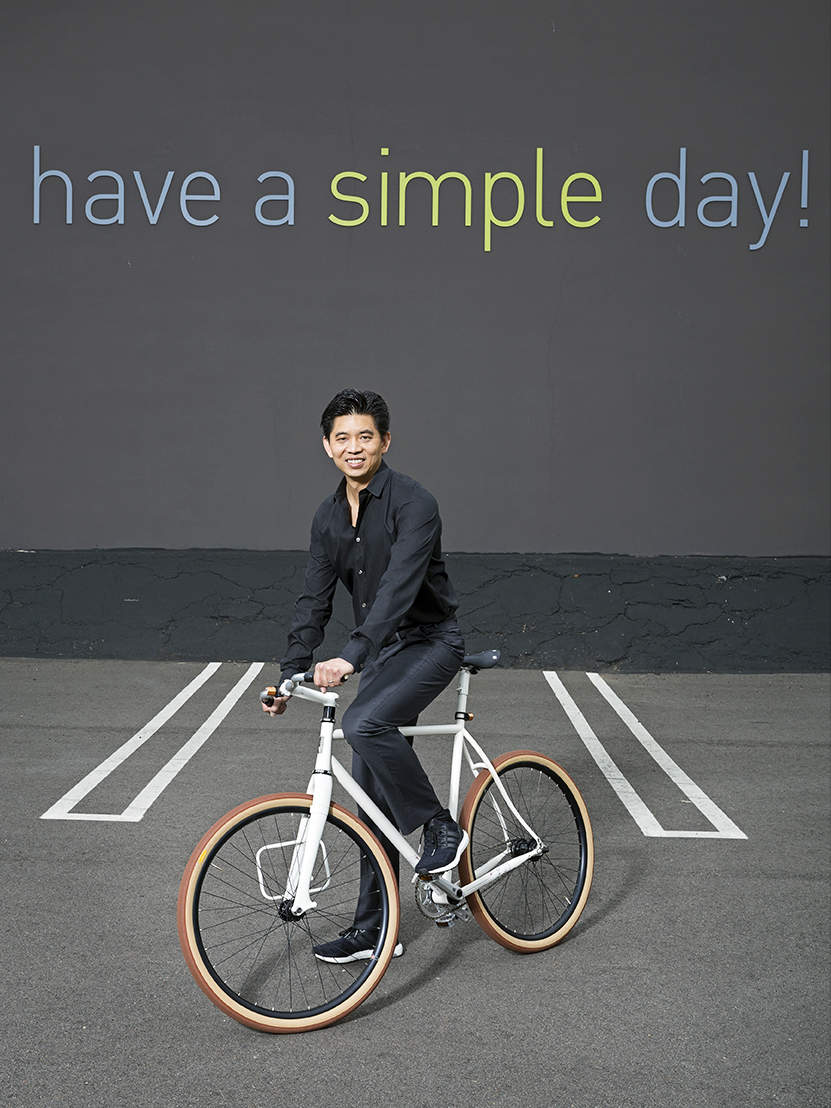 Few people would think to apply their spirit of invention to the humble kitchen garbage can. But Frank Yang did just that and created a new category: the most prosaic household items reconceived with panache and stainless steel. Yang, 44, was a tinkerer as a child and first learned about business by helping his dad at flea markets. Today his company, Simplehuman, sells soap pumps, high-tech vanity mirrors (with sensors that automatically turn the light on when you approach), and more. Last year the company’s sales were $150 million. Yang’s story:

I grew up in Taiwan. When people asked, “What do you want to do when you grow up?” I’d say, “I want to invent something and sell it.” As a kid, I thought there should be automatic dog feeders and stoves that turn themselves off if there are no pots on them.

When I was 10, my family immigrated to Los Angeles. My father became an importer. At first we struggled. We’d go to swap meets, where we sold dead inventory from his business—like seat cushions or mugs that chill beer—to make ends meet. I learned how to display and talk about products and negotiate in Spanish.

I was always good at fixing things. In seventh grade, we had remote-control drag racing in my neighborhood, and there was a rich kid who was a bully. I couldn’t afford an expensive car, so I fixed up a cheap one by changing the chassis and steering wheel to make the car lighter. Then I added an extra battery. It didn’t look good, but I beat the rich kid.

I went to UCLA for political science but wasn’t sure what I wanted to do. My girlfriend, who’s now my wife, was a graphic design major; she suggested I take an industrial design class. I loved it, but it was too late to change majors.

After graduating, I worked for my father’s company. I sourced products—and learned about the supply chain and how to deal with manufacturers. But I felt suffocated, so I quit and told my father I was going to design something to sell. He was doing well by then, so he gave me $200,000 to start my own company.

For more content from Fortune Venture, watch this video:

It was 2000, and I looked at housewares. I saw big displays of expensive, unattractive stainless-steel cans that weren’t much more functional than cheap plastic ones. Back then, no real thought was given to design in household products. I thought, “Everyone has a trash can. I want to design one that’s really cool.” So I hired some freelance industrial designers and one employee. We figured out how to make the pedal lighter, while trapping the odor in the can, and made it all look good.

No manufacturer wanted to talk to me. I finally found a small factory in Taiwan, owned by Mr. Wang Ding-Chou. For six months we would fax designs back and forth. Through trial and error, we made a prototype, and I went to the International Home and Housewares Show in Chicago. The Target (TGT) and Container Store (TCS) buyers loved it. The Container Store gave us a $30,000 order, then Target placed a test order.

The hardest thing to work out was the tooling process, getting the manufacturing components and machines right, which affects output, quality, and pricing. At one point, Mr. Wang made a bunch of trash cans, and I rejected them all. He was ready to give up working with me. Manufacturers are all about faster, cheaper, and I’m about higher standards. So I visited the tooling company with him, and we were able to work things out.

HOW TO CREATE A WORKPLACE FOR SMART PEOPLE

I believe in health and family first. At Simplehuman, individuals can set their own work hours. We’re here to make a kick-ass product, but if you need to leave for family, just go. If it’s spring break and you’re not on vacation, bring your kids to work.

We have a basketball court and gym in the middle of the office. There’s yoga at noon, Krav Maga on Friday afternoons, basketball games after work, and more. People shoot hoops while talking out product issues.

Every Tuesday a chef comes in to create healthy lunches. Every Friday we serve a breakfast built around different ethnic foods. After breakfast we have staff announcements and talk as a group about what’s happening in the company.

It’s not about partying all day. We have an environment where ­people are more open about discussing things and solving problems together. There’s something different about arguing in a ­conference room with a guy who’s also on the same basketball team as you are. We have very low turnover.

The first year we had about $800,000 in sales. I’d cold-call retailers, and most didn’t call back. But opportunities come up, and you have to be ready to take advantage of them. I remember sending some sample cans over to the Lowe’s (LOW) buyer, and the next day, he called to say another company he worked with was out of business. “Let’s talk,” he said.

Our company was initially called Canworks. When buyers wanted more products, we started making dish racks, but our name didn’t fit. I wanted people to feel efficient when using our products. We talked with naming consultants, and they came up with Simplehuman.

Eventually retailers told us to expand into the bath category. So in 2010 we introduced bath accessories. We made a bamboo tissue-box holder, but the numbers weren’t good—we were just one of many choices. I learned we can’t make everything, and lost about $750,000 on the R&D and tooling for that line. But we stuck with the bath line and went on to make sensor mirrors and soap pumps.

For me, it’s about creating something people love. We designed our soap dispenser to pump soap at 0.5 seconds. An engineer told me, “I can do it in 0.2 seconds.” I said, “Okay, do it; we’ll see what happens.” When I put my hand under that second dispenser, soap appeared instantly. It was magical. Why? People’s reaction times to visual stimuli average 0.25 seconds, so when something happens within 0.25 seconds, it’s magical. That’s what you get when you don’t settle for “good enough.”

A version of this article appears in the July 1, 2016 issue of Fortune with the headline “Inventing Products Is His Lot in Life.”

This story has been updated to correct the fact that the company once made dish racks, not dishrags.