Brexit Could Open the Door to Russia Joining the EU 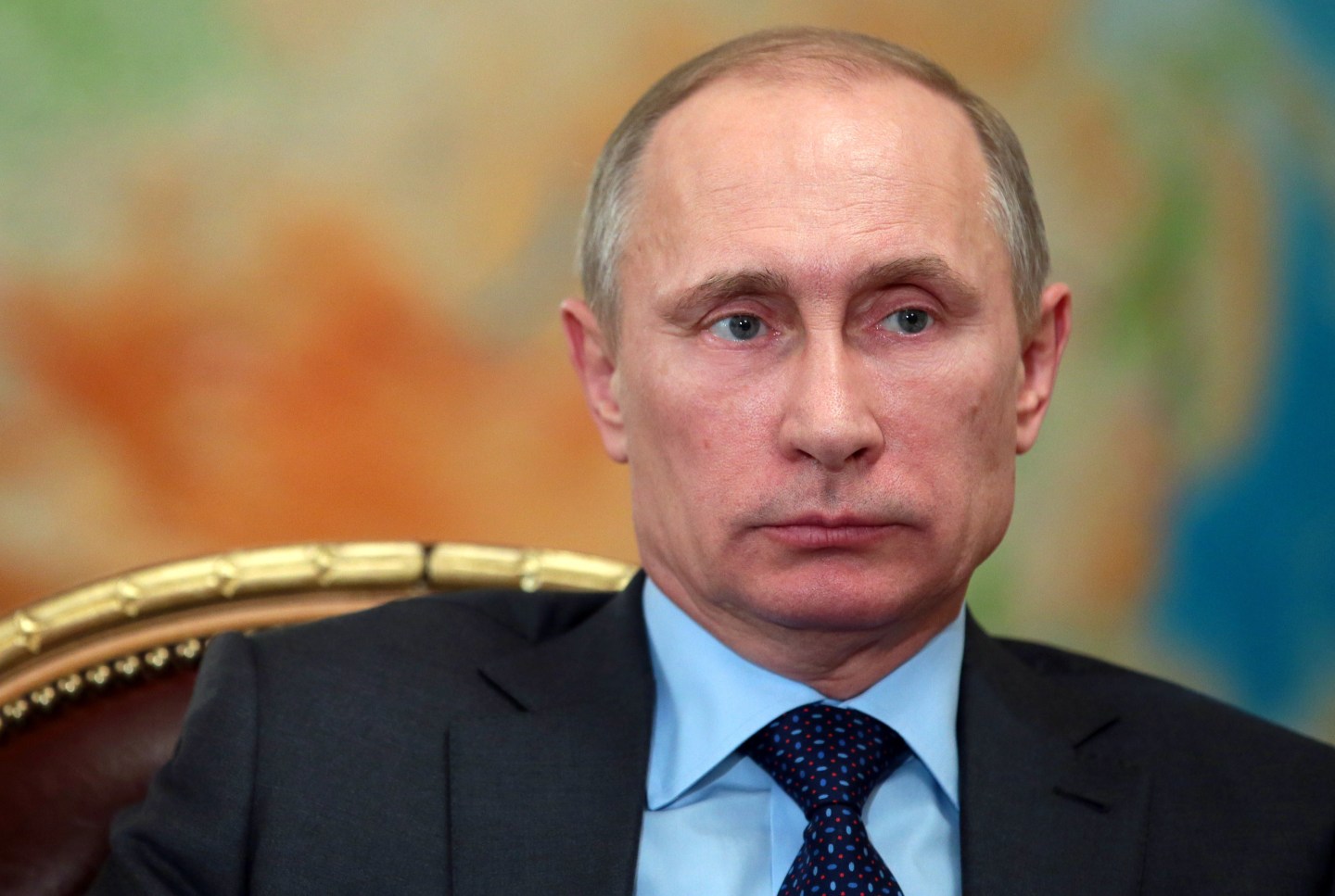 Britain’s exit from the European Union opens the door to a possible Russian entry—a “Rentry” or perhaps “Russ-in”—into the (now) 27-member club. While it could take years, even decades, before the Russian Federation could meet all the criteria under the so-called Copenhagen Criteria to join the EU as a full member, it is far more likely to occur now with the U.K. out of the picture.

Tempting Russia with EU membership would do far more to elicit better behavior from Moscow than the weak economic sanctions the EU currently imposes on it. Russia’s entry would not only be a boon for trade in the region, but it would also finally make Europe a true superpower with the ability to take on China and the U.S. both economically and militarily.

At first blush, it might crazy to think “Rentry” could happen. After all, tensions between Russia and the EU are arguably at their highest level since the end of the Cold War. Last week, amid Russia’s continued aggression in the Ukraine, the EU extended its long-running banking sanctions against Moscow for another year.

Retaliatory Russian sanctions against EU foodstuffs will remain in effect as well, costing the EU agri-food sector billions of euros in lost revenue. Meanwhile, net foreign direct investment flows between Russia and Europe are now at their lowest level in nearly two decades, going from $80 billion in 2013 to almost nil last year.

And if the economic tension wasn’t bad enough, the Baltic states and Poland, which are all EU (and NATO) members, have increased their defense spending considerably following Russia’s invasion of the Crimea two years ago. They are increasingly concerned that Vladimir Putin, Russia’s long-standing leader, might try to reenact the opening scene of World War II and invade their territories. This might be paranoid, but it’s not totally off-base.

Still, despite the increased tensions and simultaneous crash in energy prices, Russia remains the EU’s fourth-largest trading partner and the EU continues to be Russia’s biggest trading partner; total trade between the two was nearly €209 billion in 2015, according to figures from the European Commission.

If energy prices rebound, which will happen sooner or later, those trade figures will explode. Back in 2012, before energy prices crashed and before sanctions were imposed, annual trade between the two equaled €338 billion, making Russia the EU’s third largest trading partner behind the U.S. and China. If there was truly free trade and open borders between Russia and Europe, that number could easily double or triple in just a few years.

It will be hard for the sides to continue dismissing each other given their close geographical proximity and historical ties. Indeed, half of the European Union was either directly or indirectly ruled from Moscow at some point in the last century. As such, much of the infrastructure needed for trade—such as pipelines, roads, and railroads—are already connected. Today, Russia supplies nearly all he natural gas for many of the eastern members of the EU, as well as the bulk of Germany’s needs. As Germany continues to retire its nuclear and coal power plants, this link will only grow more important.

The number one issue hurting the relationship between the EU and Russia today is the Ukraine controversy. Russia’s invasion and subsequent annexation of Crimea was truly shocking and inexcusable. But while much of Europe disapproved of Russia’s aggression, few countries—especially those in the east that are reliant on Russian gas—were willing to jeopardize their close trading relationship.

Leading the charge for sanctions and a more confrontational relationship with Russia was the EU member that traded the least with Russia: the United Kingdom. The U.K. was the only EU signatory of the 1994 Budapest Memorandum, which obligated the U.K., the U.S., and Russia to give security assurances protecting the territorial integrity and political independence of Ukraine. In exchange, Ukraine agreed to sign the nuclear non-proliferation treaty and hand over its legacy Soviet nuclear missiles to Russia, where they could be better monitored and contained.

When Russia forcibly annexed the Crimea from Ukraine in 2014, the U.K. government was obligated to respond, amid what was clearly a violation of Ukraine’s territorial integrity (by a signatory of the Budapest Memorandum, no less). Britain was unwilling to go to war with the Russians over Crimea, however, so it instead pushed its fellow EU members to join it in levying economic sanctions against Russia. The rest of the EU, which remain far more reliant on Russian trade than the U.K., ultimately agreed to minor economic sanctions in a bid to support the U.K. and express displeasure over Russia’s aggression.

While most of the sanctions were economically insignificant, they did have a big negative impact on Russian public sentiment toward the EU. When recently asked if they would want their country to join the EU, 67% of Russians surveyed said they were against it, with only 18% in favor of it occurring anytime in the next 20 years, according to DW-Trend, a monthly survey of Russians carried out for the German media company Deutsche Welle.

But public opinion, on this issue in particular, is fickle. Back in December 2010, some 54% of the Russian public said they were in favor of their country joining the EU within the next 20 years—with a third believing it could happen within the next five years. Clearly that didn’t come to pass, but the survey shows that Russians don’t have a fundamental problem with joining the EU—they are just upset with the EU at the moment.

This row between Russia and the EU is fleeting and Russia knows it is time to make amends. “Sooner or later common sense will prevail and sanctions will be lifted,” Dmitry Medvedev, Russia’s Prime Minister and former President said earlier this year. “But for this to happen we need to make steps toward each other.”

With Brexit now really happening, the EU and Russia have an opportunity to mend their relationship and seek peaceful co-existence through diplomatic and positive reinforcement, instead of through sanctions and posturing.

“Without the U.K. in the EU, there will no longer be anyone so zealously standing up for sanctions against us,” Sergei Sobyanin, the influential mayor of Moscow, tweeted last week after Brexit was confirmed.

Public opinion toward the EU has been soured by Russian propaganda, but that can be quickly turned. The EU can now choose to offer Russia the opportunity to join, pacifying them through economic prosperity instead of via sanctions. It is a page ripped right out of President Obama’s playbook in his recent decision to drop the U.S. embargo on Cuba.

It is no coincidence, then, that European Commission President Jean-Claude Juncker showed up at the St Petersburg International Economic Forum before the Brexit vote talking about “building bridges” between the EU and Russia. It was the first time since the Ukraine crisis broke out that Western officials have attended the event, which President Putin likes to think of as Russia’s Davos.

Nor was it a coincidence that Mr. Putin declared last week that America was the world’s superpower, downplaying Russia’s significance on the world stage. It was almost as if he was saying that Russia needed to join with others if they, or anyone else, wanted to counter the heft of the U.S. economic and military machine.

Now, a country doesn’t become a member of the EU overnight. It is a process that can take years—even decades—to complete. As of now, Russia would miserably fail a number of the 35 tests necessary to attain EU membership. But it wouldn’t fail on all of them, and if Russia starts the process with some wins, there would be pressure on the Kremlin to clean up its act so that Russia could finally reach EU membership.

It took Russia 18 years to negotiate its entry into the World Trade Organization—by far the longest negotiation in the WTO’s history. President Putin cancelled membership talks a few times, insulted the organization and its leaders often, and balked at making the necessary reforms for entry. But in the end he acquiesced and the two sides worked out a compromise, as joining the WTO was seen as vital for the country’s future growth and prosperity.

“Rentry” would probably require a similarly painful process but, in time, the two sides could come to an agreement. Russian EU membership would not only serve to revitalize the EU in what is a dark time for the club, it would also help modernize Russia and curb its abuse toward itself and others. There really is no downside here. It will just take patience and open minds in both camps to see this through.