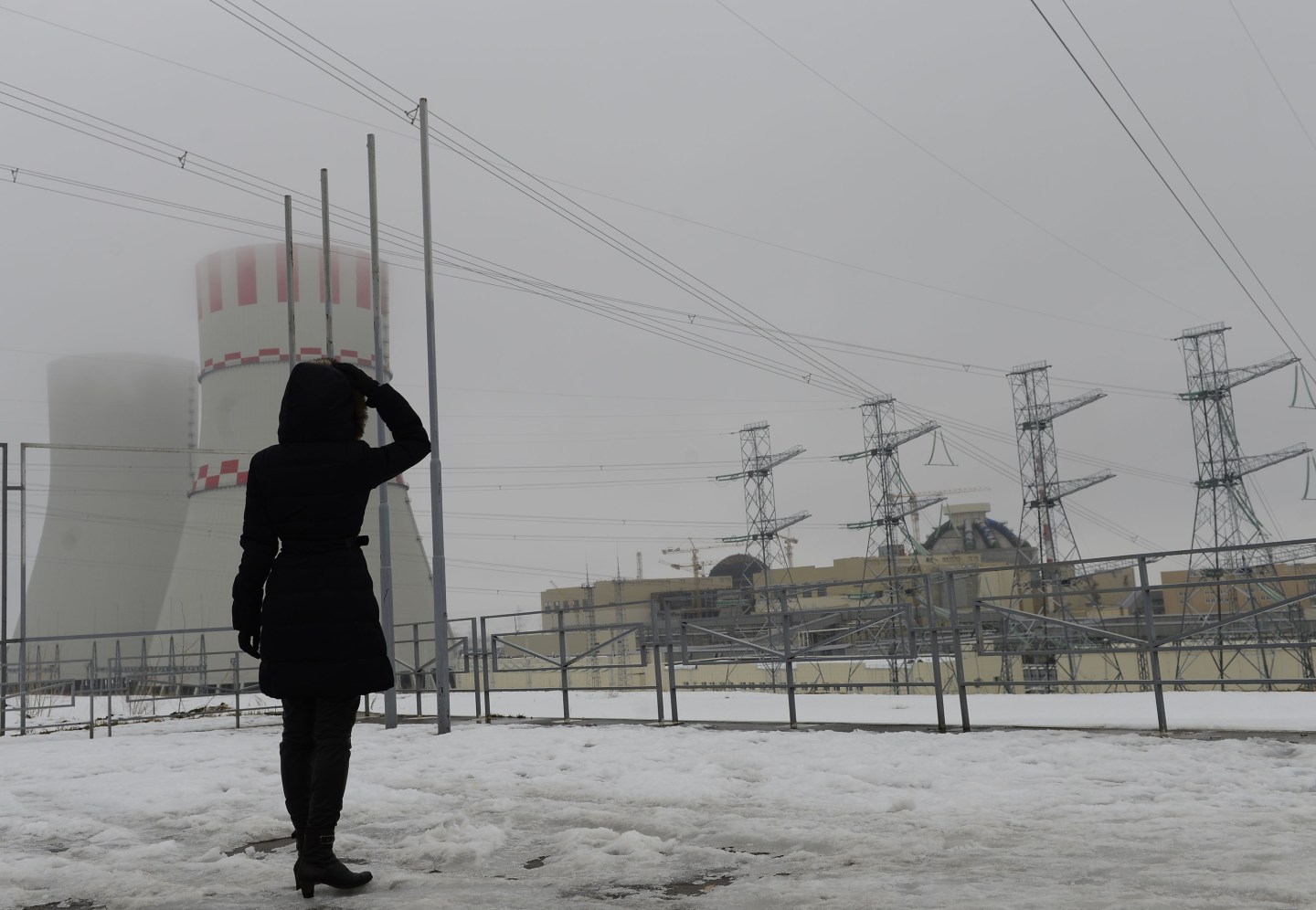 NOVOVORONEZH, RUSSIA - MARCH 2: Russias Novovoronezh plant in Voronezh Oblast, central Russia which is a sister project to Turkey's first nuclear power plant, the Akkuyu Nuclear Power Plant, is pictured on March 2, 2015. The Novovoronezh nuclear power station is vital to the development of the VVER design. Rosatom, Russias state-run atomic energy corporation, signed an agreement with Turkey in 2011 to build and operate a four-reactor nuclear power plant in the Mersin province on Turkeys Mediterranean coast. Turkey plans to begin the infrastructure construction of the Akkuyu nuclear plant this year. This is a four-reactor facility in the Mersin province on Turkey's Mediterranean coast. Power from the nuclear plant will replace about 10 percent of hydrocarbon generated power in Turkey's power mix when it is fully operational. (Photo by Sefa Karacan/Anadolu Agency/Getty Images)
Photograph by Sefa Karacan — Anadolu Agency/Getty Images

The $100 billion overseas order book of Russia’s nuclear power plant builder Rosatom—bigger than all its Western competitors combined—makes it look like the giant in its field.

But if the company—formed in 2007 from the Russian Atomic Energy Ministry and tasked with turning nuclear power into a major export industry—is ever to reach its potential as a global industrial giant, it will have to shed Russia’s reputation for using energy policy as a means to political ends.

Deal after deal has collapsed in Europe, where individual countries and the European Union as a whole consider it a priority to reduce dependency on Russian energy, and relations have deteriorated over Moscow’s intervention in Ukraine.

A project in fast-growing, energy-hungry Turkey—possibly the ideal market on paper—has been stalled because of a collapse in relations between the two countries supporting opposite sides in the Syrian civil war.

And an array of deals announced in poorer developing countries like Egypt, Jordan and Bangladesh seem unlikely to reach fruition any time soon because of the countries’ lack of experience with nuclear power, shortage of capital and grids that are unsuitable.

“Rosatom is pretty good at announcing $100 billion euros of orders in 25 countries, but not an awful lot of these are firm contracts, they are just bits of paper,” said Steve Kidd at East Cliff Consulting.

Since the 2011 Fukushima disaster, the world nuclear industry has been stagnant as Germany and other countries decided to exit nuclear, Japan closed most of its reactors and even China reduced its pace of nuclear expansion.

Supporters say nuclear power still has a future as a proven technology to generate electricity without emitting carbon that causes global warming. But low gas and coal prices and the competition of increasingly cheap wind and solar power have made it uneconomical in large parts of the world.

Why the U.S. Should Export Nuclear Power

In the United States, several nuclear plants have closed and in Europe new nuclear plants can only be built with state subsidy, as French utility EDF’s Hinkley Point project in Britain shows.

Yet Rosatom still announces a new deal every few months as it markets nuclear to developing countries. It offers a unique business model in which it finances, builds and operates the nuclear plants, and then takes away the waste.

Experts say many of these deals have little chance of turning into firm contracts, as many of these countries are decades away from being able to use nuclear energy in their grids.

In more developed countries like Hungary and Turkey, where Rosatom won billions worth of nuclear reactor orders, its projects have been stalled for years due lack of funding, local opposition and suspicions about the Kremlin’s political motives.

“The Russians are increasingly viewing their energy fuels and technologies as a lever for foreign policy,” Carnegie Endowment for International Peace associate Mark Hibbs said.

Rosatom declined to comment on the status of its foreign projects or whether its investments had a political component. The Kremlin did not immediately reply to written questions submitted by Reuters.

“All of the contracts that we have already signed we think to be very reliable,” he said at a nuclear conference.

Turkey was an ideal market for Rosatom. A large developing market, with its own scientific community, domestic capital and fast-growing power needs, as well as a cross-roads for energy infrastructure. But it also shows how politics trumps commerce.

In 2013, Rosatom won a $20 billion contract to build four reactors in Akkuyu in what was to become Turkey’s first nuclear plant as Ankara tried to cut reliance on imported energy.

But late last year, Rosatom stopped construction following the downing of a Russian jet flying sorties over Syria near the Turkey-Syria border. The incident led to a crisis in relations between Turkey, which supports rebels fighting against Syrian President Bashar al-Assad, and Russia which has intervened in support of his government.

In April, a source told Reuters a Turkish construction firm is in talks about buying up to 49% of the project.

Komarov told Reuters in May the Akkuyu project had not collapsed.

“The project is not subject to sanctions. As far as we know, work is continuing,” he said.

For more on nuclear power, watch:

Russia has a lot of experience building reactors abroad: There are Soviet-era reactors all over Eastern Europe.

But without a captive market and facing fierce competition from other vendors, Rosatom has built relatively few reactors since 2007: Two in Tianwan, China, one in Bushehr, Iran, and one in Kudankulam, India are working. Rosatom said a second one in Kundankulam will start operating this month.

Experts say some deals Rosatom boasts about are not contracts, just a “memorandum of understanding” or “framework agreement.” Many of these are with countries that will not be ready for nuclear for years, if not decades, such as Algeria, Argentina, Bolivia and Nigeria.

Russia is not the only nuclear vendor to sign MOUs with unlikely customers. China recently signed a nuclear agreement with Sudan, and before its government bailout France’s Areva also spoke of selling numerous reactors in developing countries.

In more advanced emerging markets like South Africa and Vietnam, Rosatom competes with U.S., French, Chinese, Japanese and Korean vendors, all eager to win business in the tight market since Fukushima.

“I would not draw the conclusion that Russia is about ready to take over the nuclear universe,” CEIP’s Hibbs said.

For competitors like GE Hitachi, Toshiba and Areva, Rosatom’s frenetic dealmaking—even if it leads to few firm contracts —is a worry, as it allows Russia to occupy the terrain.

“The Russians are clever, they announce lots of deals and freeze the market, so other vendors stay away,” said a board member of a nuclear reactor builder.

Russia’s most focused nuclear export drive is in Europe, which is trying to wean itself off Russian gas as its main source of energy for power generation. Opponents suspect the Kremlin of aiming to use nuclear power to wield political leverage, the way it has with gas, turning the taps down during confrontations with Ukraine.

Several Rosatom attempts to break into the EU market via former East bloc countries have come to nothing, although these projects had seemed like serious prospects a few years ago.

In Bulgaria, a contract to build two reactors at Belene on the Danube River was abandoned in 2012 for lack of financing.

From Kaliningrad, a Russian territory located between Poland and Lithuania, Rosatom hoped to export power to Poland and even Germany with an undersea cable. That plan too was quietly dropped around 2013 as it became clear there was no hope of selling electricity into the EU.

In 2014, Czech utility CEZ scrapped a tender for the $15 billion Temelin project—where a Russian consortium and Westinghouse were the two remaining bidders—due to low power prices and the state’s refusal to provide price guarantees.

Why Startups Will Save Nuclear Tech

That same year, Hungary awarded Rosatom—without a tender—a contract for two reactors in Paks. In November 2015, the European Commission launched proceedings over the contract saying it could infringe the EU’s procurement rules, and opened an investigation into possible illegal state aid.

After a row about Russian investors trying to use a Croatian firm to circumvent shareholder nationality requirements, Russia finally convinced Finnish utility Fortum to buy into Fennovoima.

Experts expect Rosatom will divert resources from Paks and other projects to speed up the Finnish project, and stay ahead of China, which also wants to break into the EU.

Chinese utility CGN in 2015 signed a deal with Britain to build a reactor there in exchange for financing French utility EDF’s nuclear project in Hinkley Point.

Meanwhile, whether any new plants ever get built, Rosatom is likely to keep signing new deals around the globe.

“Rosatom likes to sign MOUs everywhere, they like one every few months, for the photo opportunity,” Haverkamp said.