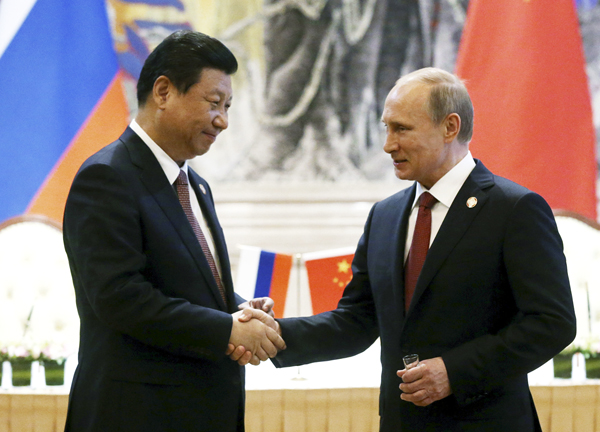 Russia and China sealed a raft of energy deals during President Vladimir Putin’s visit to Beijing on Saturday, strengthening economic ties while pledging to preserve the strategic balance of power among nations.

The deals involve the sale of stakes in a number of Russian projects to Chinese firms, an oil supply contract and joint investments in petrochemical projects in Russia.

The deal will help Rosneft finance the project and get access to the markets of the Asia-Pacific region, the Russian firm said in a statement.

Vladimir Putin: Brexit Is Result of ‘Arrogance’ From British Leadership

Rosneft and Beijing Enterprises Group Company Limited agreed the key terms of a potential sale of a 20% stake in Rosneft’s oil producing subsidiary Verkhnechonskneftegaz to a unit of Beijing Gas Group.

The Russian firm also signed a framework agreement with Sinopec regarding the construction of a gas processing and petrochemical plant in East Siberia, aiming to set up a joint venture in 2017 focused on the Russian and Chinese markets.

Rosneft CEO Igor Sechin said his company did not plan to reduce its crude supplies to China and would defend its market position amid competition with Saudi Arabia, Qatar, Iraq, and Iran.

“We will stick to the volumes we have agreed on. It’s around 40 million tons (per year),” TASS news agency quoted Sechin as saying.

Russia was China’s largest crude oil supplier in May for a third month in a row, having surpassed imports from Saudi Arabia.

Although economic cooperation was the focus at Putin’s talks with Chinese President Xi Jinping, the leaders also agreed to strengthen global strategic stability.

A statement on the Kremlin website from the two governments called on nations to strictly abide by the norms of international law, keep military capabilities at the minimum level required for national security and refrain from steps aimed at expanding existing military-political alliances.

The statement criticized the deployment of anti-missile systems in Europe and Asia, saying those who deploy them often acted under false pretenses.

Although it did not mention specific countries, it comes at a time that Russia and NATO are at loggerheads over the western alliance’s build up of capabilities in eastern Europe, including missile defense. NATO says its actions are a necessary response to Russia’s intervention in Ukraine.

The countries’ central banks also signed a memorandum of understanding on setting up a yuan clearing mechanism in Russia that they said would be beneficial to cross-border trade and investment.