Why U.K. Universities Are Really Worried About ‘Brexit’ 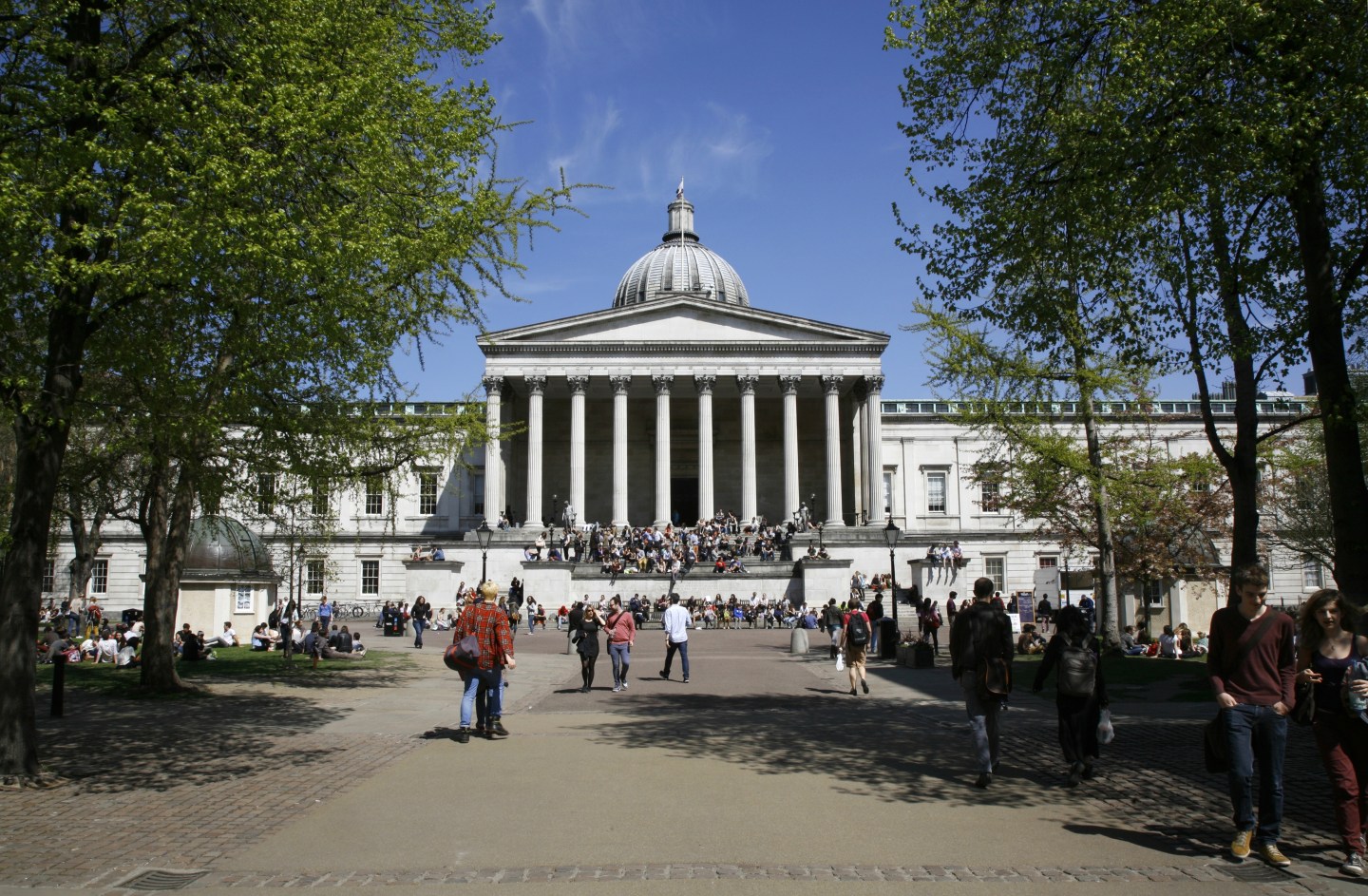 Earlier this year, Simon Gaskell, president and principal of Queen Mary University of London, found himself making a guarantee. He told current and prospective students who attend his university from European Union nations outside the U.K. that their tuition would remain the standard £9,000 no matter the outcome of the June 23 vote on Britain’s membership in the bloc.

“I just imagined prospective students from the EU thinking, ‘I do one year at Queen Mary, and then suddenly get hit with a higher fee,'” Gaskell told Fortune.

That possibility could become a reality if British citizens vote to leave the EU in the referendum later this week. Under the EU’s “free movement” principal, students from member countries have the same access to universities in the U.K. as Brits themselves. They apply the same way, dole out the same tuition (now some £9,000 per year), and rely on the same U.K. loan facilities, whose terms—that borrowers only have to pay back loans once they reach earnings of £21,000—are generous, at least by U.S. standards. But if the “leave” campaign notches a victory in the vote Thursday, U.K. university leaders fear that EU students will be forced to pay more and that their schools’ global reputations as magnets for scholars seeking a diverse and research-rich education will fade, prompting EU and international students to go elsewhere.

“There are a lot of knowns,” Gaskell says. Making his promise to EU students, he says, was “the only thing in my power.”

Trying to judge the outcome of Britain’s potential exit from the EU or “Brexit” on any front—trade, diplomacy, education—is a process bogged down in uncertainty. The vote itself is still close though in recent days, the “remain” campaign has increased its odds of winning, according to Britain’s betting houses. But if the “leave” camp claims victory, there’s no telling how the U.K. government will rewrite EU laws that dictate so many aspects of British life, including higher education.

“If there were a Brexit, we don’t stop being an EU member on June 24,” Gaskell says. It’s possible, he says, that a post-Brexit U.K. might decide to keep its existing relationship with EU students, but Gaskell isn’t betting on that. “Bear in mind,” he says, if the leave campaign wins, “the majority of the electorate would be saying we want nothing to do with EU types.”

University leaders in the U.K. are so concerned about what Brexit could mean for higher education that some 103 of them signed a letter published in the Sunday Times of London earlier this year stating that leaving the EU, “would mean cutting ourselves off from the unique support and established networks and would undermine the U.K.’s position as a global leader in science, arts, and innovation.”

Much of the coverage about Brexit’s potential impact on British universities has focused on how they would lose out on research funding granted by the EU. But university leaders have another major concern that was not explicitly cited in their letter: how Brexit will affect their non-U.K. student population.

Of the 2.3 million students who attended U.K. universities across all levels in the 2014-2015 school year, 436,585, or about 19%, came from other countries—EU member states and other nations. In recent years, foreign students have made up a larger and larger share of enrollment as the number of students from countries like China, Malaysia, and Singapore have inched up and the number of U.K. students has ticked down.

Michael Arthur, president and provost of University College London, says that EU student enrollment could fall off an even steeper cliff if Brexit causes EU students to lose their status as near-equals to U.K. students. In that situation, EU students would not only have to pay higher tuition but they could also be cut off from accessing U.K. loans. And they might need to apply for and receive visas before starting school.

The £9,000 in tuition—about $13,000—that EU students currently pay, while reasonable by U.S. standards, is among the highest rates in the EU. Another tuition hike could motivate more EU students to seek a degree elsewhere, in their home countries or in other EU members states where tuition is cheaper, says Alistair Jarvis, the deputy chief executive of the trade association Universities UK. Higher ed in Germany, for instance, is basically free.

A survey published in May by education consultancy Hobsons supports that prediction, finding that 82% of EU students would consider the U.K. less attractive if it left the European Union.

There’s concern that Brexit could deter non-EU international students, too.

From Arthur’s point of view, British schools are “generally regarded as liberal, cosmopolitan, and freethinking.” He says an exit from the European Union could hurt that reputation, making the U.K. and its universities appear close-minded and isolationist. “I think it’s possible that international students would suddenly find the U.K. less attractive.” Not all university leaders feel this way. University of Cambridge Vice Chancellor Sir Leszek Borysiewicz, for instance, tells Fortune he is concerned about how Brexit could depress the flow of students between the U.K. and other EU nations, but he still expects Cambridge to “be a global player.”

The U.K. tends to “punch above its weight” in terms of scientific research accolades compared to its population, says Elspeth Jones, professor emeritus of internationalization of higher education at Leeds Beckett University. “If anything impacts … the international collaboration that allows the quality of research to be so high, [it] will affect student choice.”

The Hobson survey provides some insight into how international students’ opinion might shift. It found that 35% of non-EU students—some 63,000 students based on new enrollment last year—say that they would have a poorer view of the U.K. if it exits the European Union.

While the number of international students attending U.K. schools has increased slightly in recent years—from 298,125 in the 2010-2011 year to 312,010 last academic session—Britain’s share of the market is not what it should be, says Pamela Barrett, director of international education consultancy Barton Carlyle. Four factors—the growth in college-age people globally, the surge in the size of many countries’ middle classes, improvements in secondary education, and a rise in the number of English language speakers—mean that “there should be more significant growth in the international student population in the U.K.” she says. But enrollment of first-year international students in the U.K. dipped 3% in 2014-2015. Barrett points to the U.K.’s strict post-study and student visa regimes as contributing factors. “The uncertainty of Brexit may exacerbate this trend,” she says.

So if international students don’t attend university in the U.K., where will they go?

Should a Brexit occur, “I have a feeling that Canada and the U.S. will benefit,” says Barrett. The education systems in those countries are large, providing a range of institutions for international students to choose from based on affordability, qualifications, and their English language skills. She cites a 2015 survey of international students by one of her clients, research firm International Graduate Insight Group, that found that of the Chinese students studying in the U.K., 91% said they would consider another country. Of that 91%—some 80,000 students—64% said that their second choice was the U.S. The group’s research also shows that Indian students tend to weigh employment outcomes when deciding where to study, so “they are more likely to consider those countries which have more favorable post-study work visa regimes, such as the U.S. and Canada,” Barrett says.

If Brexit does cause more international students to look to the U.S. in the near future, it will come at a time when U.S. universities are ramping up their recruitment of students from overseas, since they pay a premium compared to their American counterparts. That strategy has already led to unprecedented international student enrollment at U.S. schools.

Members of the pro-Brexit camp did not return Fortune’s request for comment on this issue. But an op-ed in Prospect by Jamie Martin, a former special adviser to the U.K.’s Department of Education, lays out an alternative view: that leaving the EU would give universities “more funding, access to a wider pool of international students, and … a regulatory regime that will promote better research.”

Martin argued that the current system of charging foreign students differently according to their nationality is “indefensible.” Charging EU students full international student rates would create “a windfall for universities.” Outside the EU, universities would also have access to “a broader talent pool” and all nationalities would be treated equally. “The current visa policy under which the worst German student gets automatic access while things are difficult if not impossible for the brilliant Indian scholar, is morally flawed,” he wrote. He criticized university vice chancellors supporting the anti-Brexit campaign as “part of the European elite that cannot see beyond the continent’s borders.”

Gaskell of Queen Mary disagrees with the notion that higher fees for EU students would deliver a windfall for universities, arguing instead that Brexit would decrease enrollment among non-U.K. students across the board. “The clear message [of Brexit] would be that the U.K. is drawing back into its shell,” he says, “and the assumption will be that universities are doing the same.”