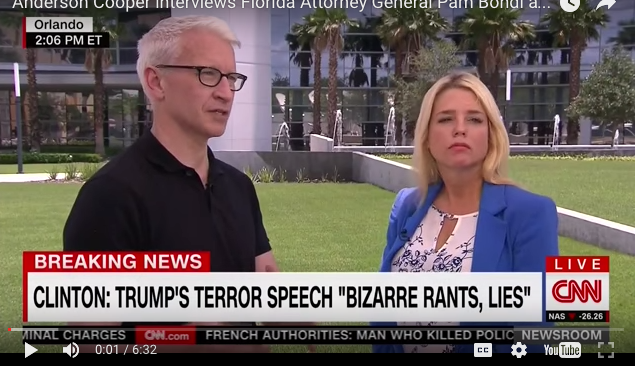 On Monday, the day after Sunday’s mass shooting in an Orlando gay club, CNN’s Anderson Cooper gave an emotional tribute to the victims. He read all 49 victims’ names aloud on the air. “They are more than a list of names. They are people who loved and were loved,” he said.

On Tuesday, in an emotionally charged live interview, he confronted Florida Attorney General Pam Bondi over her treatment of the LGBT community in Florida.

“I saw you the other day saying that anyone who attacks the LGBT community—our LGBT community, you said—will be gone after to the full extent of the law,” said Cooper, who publicly announced he is gay in 2012. The anchor said he had spoken to “a lot of gay and lesbian people here” and that many felt the attorney general was “being a hypocrite.”

For years, he said, “you’ve basically gone after gay people, said that in court that gay people simply by fighting for marriage equality were trying to do harm to the people of Florida. Do you really think that you’re a champion of the gay community?”

Florida voters had approved a same-sex marriage ban and added it to the state constitution in 2008. Bondi said that as the state’s attorney general, she was simply doing her job by engaging in a legal battle to uphold the ban. “When I was sworn in as attorney general, I put my hand on a Bible and was sworn to uphold the constitution of the state of Florida. That’s not a law. That was voted into our state constitution by the voters of Florida,” Bondi said. “I’ve never said I don’t like gay people. That’s ridiculous.”

“Anderson, I don’t believe gay people could do harm to the state of Florida,” Bondi responded. “Those words never came out of my mouth.”

The Supreme Court legalized same-sex marriage in 2015, and Cooper noted, “Had there been no same-sex marriage, you do realize that boyfriends and girlfriends of the dead [in Orlando] wouldn’t be able to get information, and would not be able to visit in the hospital? Isn’t there a sick irony in that?”

Bondi denied that she ever believed gay marriage would cause “harm” to the citizens of her state. “Those words never came out of my mouth,” she told Cooper. But as the anchor shot back, “That’s what you argued in court.”