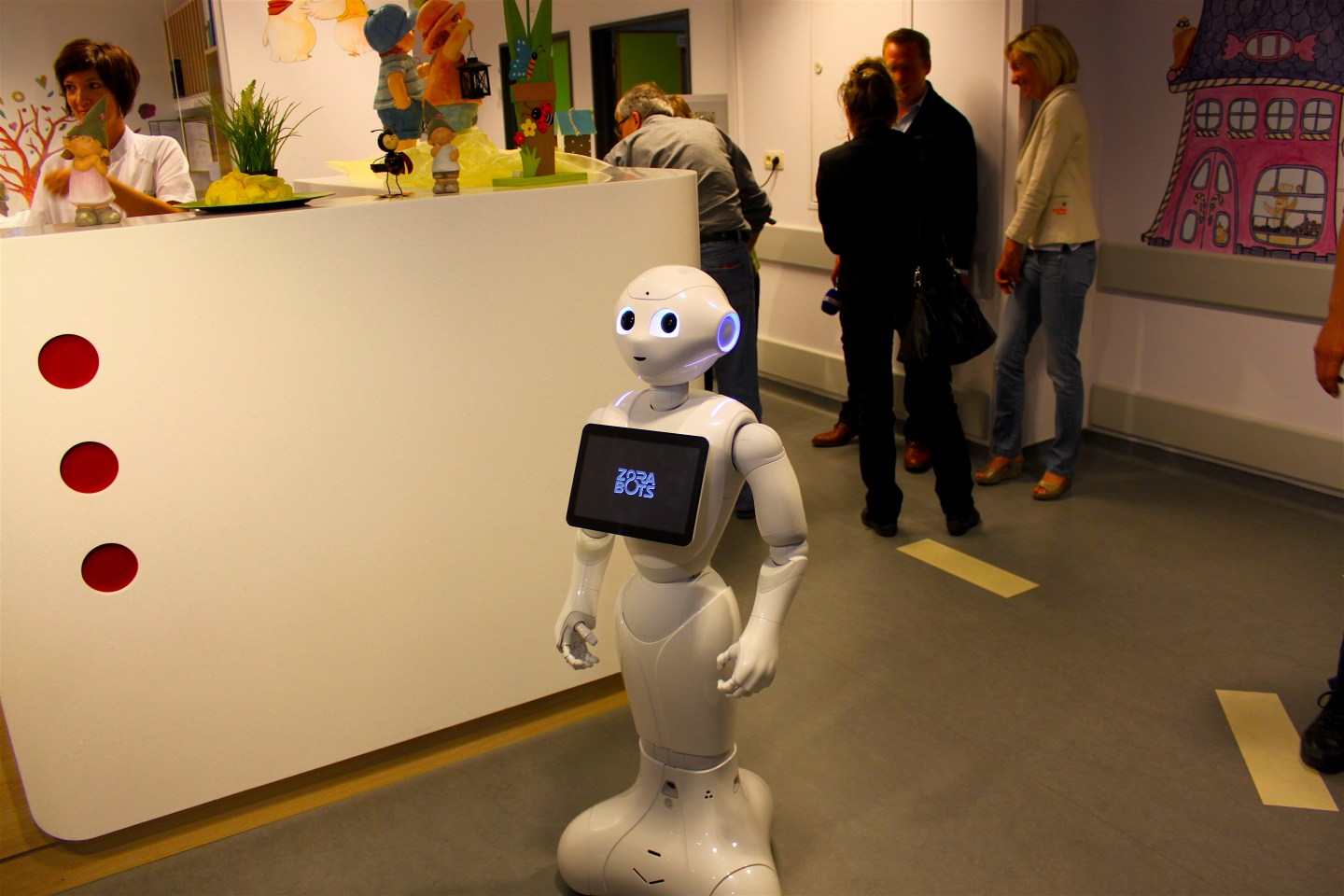 Two hospitals in Belgium will start on Tuesday using Softbank’s Pepper robots to help visitors when they arrive at reception.

The hospitals—CHR Citadelle in Liège and AZ Damiaan in Ostend—will use the Pepper bots to “provide an alternative, fast and connected initial contact and to help hospital reception staff in a user-friendly manner,” a spokesperson for Zora Bots, the Belgian company which is developing the software for the robots, told Fortune.

In practice, when someone arrives at one of the hospitals, they will be able to tell Pepper that they have an appointment with a certain doctor at a certain time, and the robot will either give them directions for getting to the doctor’s rooms, or “walk” them there.

Pepper comes with a large screen embedded in its “chest,” which helps it give information to people. In future, the robots may get new tasks once the hospitals become more familiar with them.

The wider world is probably most familiar with Pepper from an incident in Japan last year in which a drunken man beat up one of the robots in a Softbank store.

Japan’s Mizuho Bank rolled out the machines in some of its branches last year, and earlier this year, the financial services company said it was working with IBM to plug Pepper into the Watson computing platform in order to improve human-robot interactions using natural language.

Pepper is supposed to be relatively good at understanding humans emotions, according to Zora, although this is not a priority in its healthcare development at the moment.

“Healthcare professionals are more focused on the actual tasks the robot is here to perform. Although the hardware has some ’emotional tracking’ capabilities, these are not the one being developed at this stage,” the Zora spokesperson said.

For more on robots, watch our video.

The hospitals in Liège and Ostend already own smaller “Nao” robots from Zora and Softbank. (Nao is nearly 23 inches tall while Pepper is just over 55 inches tall.) The Nao bots are used in their pediatric, geriatric, and rehab units to lead exercise sessions, cheer up kids, and engage in games and activities with elderly patients to help ward off cognitive decline.

This is, however, Pepper’s world healthcare debut. According to Zora co-CEO Fabrice Goffin, the company’s vision is to “make social robots accessible to everyone.”

The company claims anyone should be able to use a Pepper robot without a technical background, although it does also provide an engineering helpdesk to its customers.

That helpdesk, along with Zora’s technical expertise in developing new applications for the robot, explains the relatively high cost of this version of Pepper. It costs €30,000 ($34,000), while Softbank usually sells Pepper for under $1,700.