Why President Obama Was Right Not to Say ‘Radical Islamic Terrorism’ 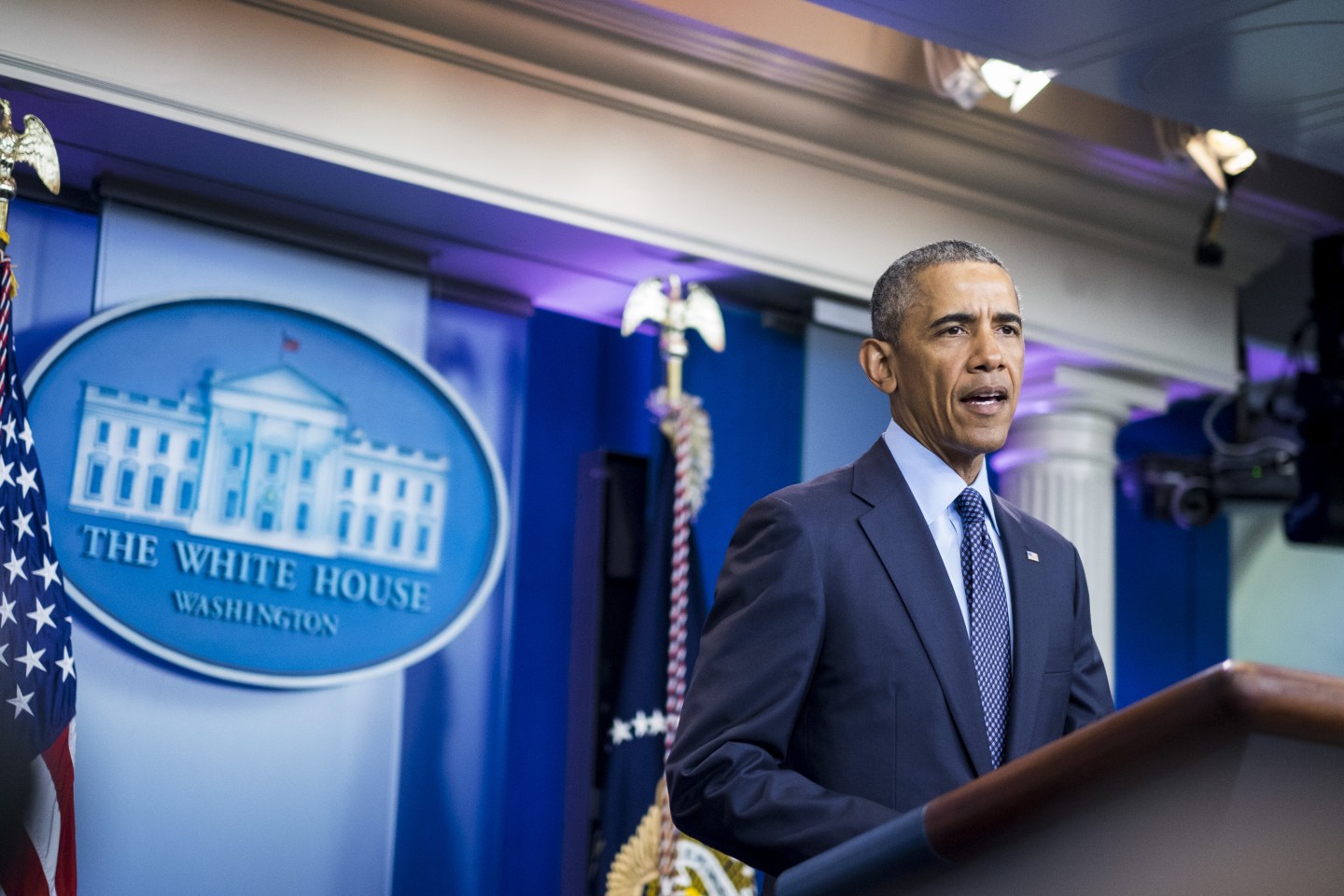 U.S. President Barack Obama speaks in the Brady Press Briefing Room of the White House in Washington, D.C., U.S., on Sunday, June 12, 2016. Obama decried the deadliest mass shooting in American history on Sunday as an "act of terror" and an "act of hate" targeting a place of "solidarity and empowerment" for gays and lesbians. Photographer: Pete Marovich/Bloomberg via Getty Images
Pete Marovich — Bloomberg via Getty Images

It didn’t take long for the massacre in Orlando to become politicized. Hours after the news broke on Sunday, President Obama addressed the nation and called the mass shooting “an act of terror.” He did not use the phrase “radical Islamic terrorism,” however, prompting Donald Trump to tweet that the president “should immediately resign in disgrace.”

Is President Obama going to finally mention the words radical Islamic terrorism? If he doesn't he should immediately resign in disgrace!

On NBC’s Today show on Monday, Hillary Clinton took a different tack. Referring to the Orlando massacre, she said “…we face terrorist enemies who use Islam to justify slaughtering people. We have to stop them and we will. We have to defeat radical jihadist terrorism, and we will.” She added that “…radical jihadism, radical Islamism, I think they mean the same thing. I’m happy to say either, but that’s not the point.”

Simply using a phrase the president rejects made Clinton’s TV appearance a news item in Politico. And Donald Trump was thrilled, saying she “broke” after he criticized her for not using the term.

I have been hitting Obama and Crooked Hillary hard on not using the term Radical Islamic Terror. Hillary just broke-said she would now use!

But while wanting to seem strong in the wake of terrorist attacks is a natural desire for a politician, we shouldn’t be so quick to follow Hillary onto the bandwagon. I’ll explain why Trump, Clinton, and the rest of us should rethink how we speak of heinous events like the mass slaughter at the Pulse disco in Orlando.

What’s in a Name?

Words matter. They both shape our perception of the world and help to transform it. Think about the way we talk about the effects of war on soldiers. The late George Carlin noted that what we called “shell shock” in World War I morphed into “battle fatigue” during the second World War, which became “operational exhaustion” in the Korean War, and then, since Vietnam, “post-traumatic stress disorder.”

Carlin was on to something when he concluded, “I’ll bet you if we’d have still been calling it ‘shell shock,’ some of those Vietnam veterans might have gotten the attention they needed at the time.” When words describe reality rather than mask or muddle it, they’re more likely to prompt meaningful action.

When it comes to describing murderous acts tied to groups like ISIS/ISIL, al-Qaeda, or Boko Haram, it’s worth nothing that those events have a dual purpose: to instill fear in non-believers and to incite believers to join the cause. The alleged shooter in Orlando, Omar S. Mateen, publicly declared allegiance to ISIS, as the Wall Street Journal, the New York Times, and other news organizations have reported. But whether or not the shooter actually had any formal ties with ISIS, the title of Rukmini Callimachi’s New York Times report says it all: “Was Orlando Shooter Really Acting for ISIS? For ISIS, It’s All the Same.”

This suggests that, yes, both Hillary Clinton and Donald Trump are right to insist on the phrase “radical Islamic terrorism” to refer to the worst mass shooting in the history of the United States.

But a closer look at the issue points us in the opposite direction.

The Murderous Effects of Sloppy Thinking

People who pay attention to nuance will see that “radical Islam” means that Islam itself isn’t the problem. Only its radical faction is.

That phrase, “People who pay attention to nuance,” is extremely important here, because too many Americans have no interest in nuance. When a presidential candidate calls for banning all Muslims from entering the country, and a significant portion of the electorate believes this proposal makes sense, it’s clear that nuance and relevant distinctions mean nothing to too many. Tragically, there are life-threatening consequences to such a cavalier disregard for the proper use of language.

In 2015, crimes against American Muslims tripled. Why? Because dozens of self-righteous non-Muslims equated believers in Islam with terrorists. That false equivalency resulted in hateful—and sometimes deadly—acts committed against innocent human beings. And it’s been happening for far too long.

Four days after 9/11, a man named Frank S. Roque drove into a gas station in Mesa, Arizona and shot its Sikh owner to death. He then drove to another gas station and fired at a Lebanese clerk, after which he headed to the home of an Afghan family and continued his shooting spree.

When he was arrested, Roque attempted to justify his actions by saying: ”I’m a patriot. I’m a damn American all the way.” The fact that his victims had nothing to do with the 9/11 attacks didn’t matter a whit to him.

Where to Go from Here

There are several values at stake with respect to the question, “Should we use the phrase ‘radical Islamic terrorism?’” and those values appear to be at odds with one another. On one hand, it’s important to refer to the world as it really is and not as we want it to be. But on the other hand, it’s essential to consider the consequences of how we describe the world, given the fact that many of us have little regard for subtlety and nuance.

According to the Pew Research Center, there are 3.3 million American Muslims, and the number is expected to exceed 8 million by 2050. These men, women, and children deserve the same protection under the law as everyone else, and until the majority of us are able to appreciate the distinction between the radical factions of Islam and its peaceful majority, it’s best to avoid conjoining “radical” and “Islam.”

I don’t expect Trump and his followers to agree, but because Hillary Clinton is open to rational argument, I hope she’ll reconsider her current position and appreciate the importance of using language responsibly. She can be tough without endangering the welfare of millions of law-abiding Americans.