You Can Now Use Dunkin’ Donuts Mobile Ordering App Nationwide 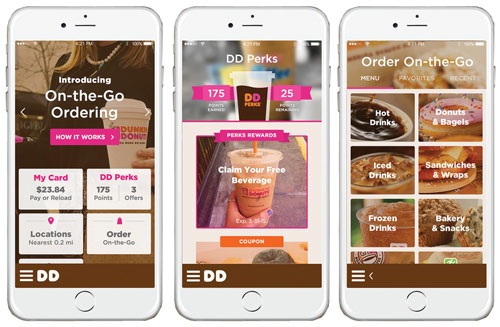 Dunkin’ Donuts on Monday debuted a nationwide push to offer mobile ordering capabilities at the chain’s donut and coffee shops, a bigger bet on embracing tech as it aims to keep pace with rival Starbucks.

The brand’s corporate parent, Dunkin Brands (DNKN), said “On-the-Go Ordering” is now available for all members of the company’s DD Perks Rewards Program, allowing users to order, pay in advance via a smartphone or other mobile device, and then pick up their order at a local restaurant. Orders can be made up to 24 hours in advance, and users can specify the location where they want to pick up their order. The mobile ordering capabilities are now being offered at more than 8,000 restaurants.

This initiative is part of a broader push by the restaurant industry to make online and mobile orders easier for consumers as they increasingly use smartphones to make purchases either for pickup at neighborhood restaurants or at-home delivery. Many brands are testing tech upgrades that meet both trends, though for Dunkin’ and Starbucks (SBUX), in-store pickup has greater mass appeal at this point.

As Fortune has reported, Dunkin’ has been expanding mobile ordering across various U.S. states of late, a savvy way to not only generate more purchases and greater loyalty but also an opportunity for the chain to market directly to customers. Dunkin’ first launched a mobile app for payments and gift giving in the summer of 2012, and in early 2014, it debuted a rewards loyalty program. The company had over 4.3 million reward members at the end of last year.

Rival Starbucks is far ahead of Dunkin’ when it comes to its mobile integration. The Seattle-based coffee giant has almost 19 million mobile app users in the U.S. alone. At the 300 busiest urban-located Starbucks, mobile order and pay represent over 10% of transactions and at peak periods can get as high as 20%. Those figures imply there is plenty of room for that portion of the business to expand.

“We are just beginning to see the full benefit of Mobile Order & Pay beyond the speed and convenience it affords to both our customers and partners,” Starbucks chief operating officer Kevin Johnson told analysts earlier this year. He said mobile order and pay transactions represented about 4% of total transactions during the quarter, sequentially increasing 40%.