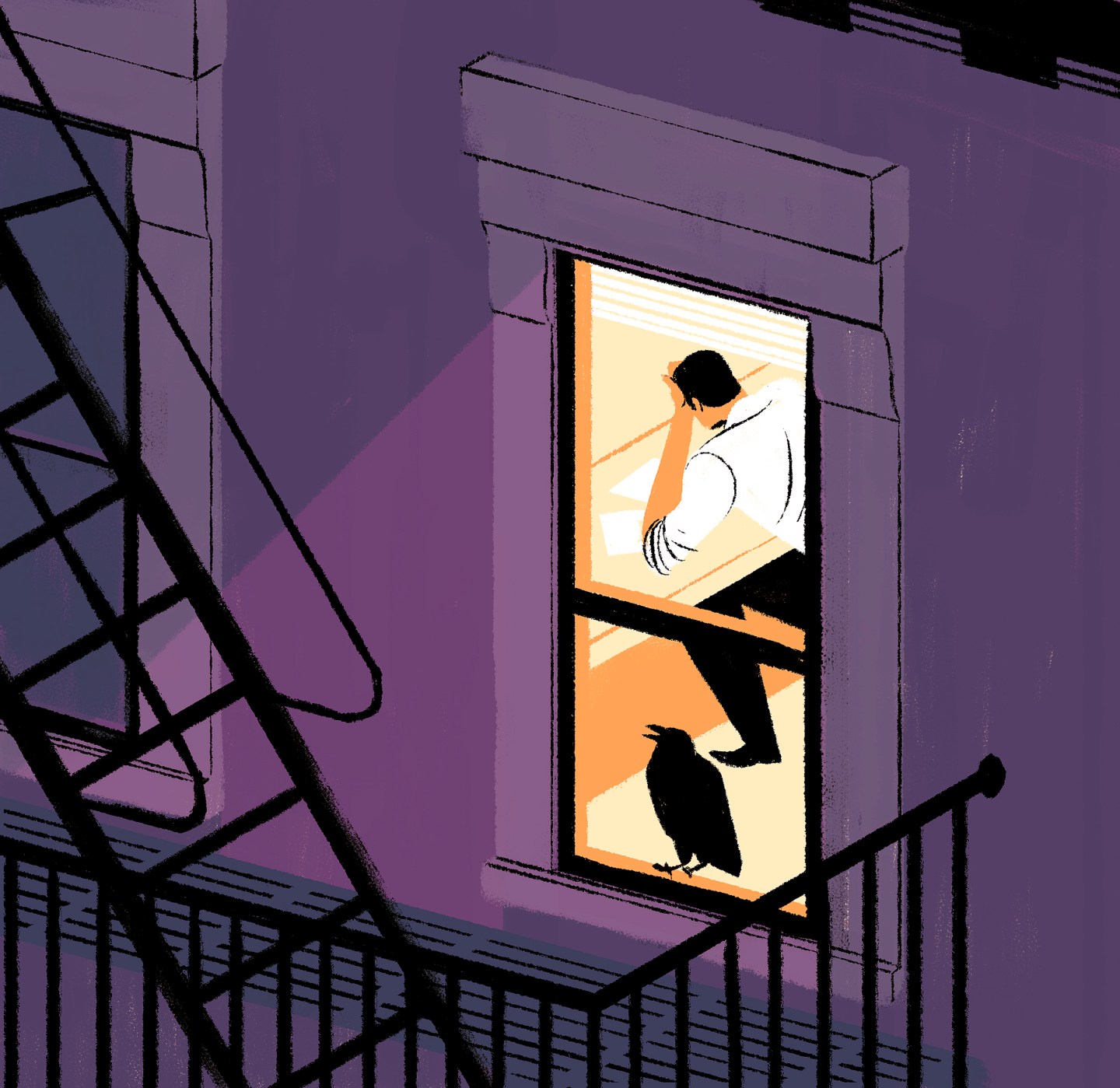 Once upon a day so hairy, when the Dow turned red and scary
And the bulk of my investments fell into a pit of gore—
While I wondered, nearly weeping, suddenly there came a peeping
As of something gently creeping, creeping to my office door.
“ ’Tis some analyst,” I muttered, “skulking round my office door—

I really wish he’d called before.”
Ah, distinctly I recall it! Oil and gas were in the toilet;
Every share of the tech sector lay in ruins on the floor;
Eagerly I sought to short them! Stupid me for having bought them!
Sorrow crushed me as I saw the shredded cabbage I adore
Cast forever like some worthless spittle in a cuspidor.
Gone away forevermore.

Presently I figured, okay, it seems the guy’s not going away.
“Sir,” said I, “or Madam, I won’t keep you waiting anymore;
But the fact is, I was grumbling, ’bout my net worth, which is crumbling,
And so when you came a stumbling, mumbling by my office door,
I thought you were the Xerox rep”—here, I opened wide the door;
A raven standing on the floor.

“Good morning,” said the tubby bird, who offered then no
further word,
Except to add, “You’re up the creek, my friend, without a decent oar.”
Then it tiptoed to the edge of my credenza’s farthest ledge;
And posed itself, a stuffed and mounted creature from
forgotten lore.
“Oh!” I cried. “Don’t leave me hanging! Please, I beg you,
tell me more!”
Quoth the raven: “Shut the door.”

I did so quick, with little rancor. (He looked like an investment banker;
And I always listen to the suits who run the candy store.)
Then, I thought, the air grew thicker; fibrillation hit my ticker;
“Wretch!” I cried. “What is your wisdom? Tell me! Tell me!
I implore!

What’s the chance I can recoup the value of my dwindling store?”
Quoth the raven: “Pretty poor.”
“The thing you did,” the raven said, “was to put your
precious bread
Into equities that rise and fall like night’s Plutonian shore.
The market’s an atomic pile, emotional and volatile;
And you, you dolt, are playing with a nut whose loss you
can’t ignore!
You’re grazing in a field of raptors and you’re just an herbivore!”
Quoth the raven: “Sí, señor.”

“Prophet!” said I, “Second-guesser! Who elected you professor
Come from Hell to validate the fiscal nightmares I abhor!
Tell this soul with sorrow laden, even as my hopes are fadin’
Whether I shall ever understand this process at its core;
Grasp the workings of the monster housed inside the market’s floor!”
Quoth the raven: “Nevermore.”

And the raven, never flitting, still is sitting, unremitting,
On the edge of my credenza just inside my office door;
I must tell you, it’s a downer to be with this feathered frowner.
And yet—the news is that I am a little up from just a month before!
I’ll show it, with a little luck! And come back with a mighty roar!
Pluck that raven—evermore!