How Two Firemen Created an Empire of Sub Shops 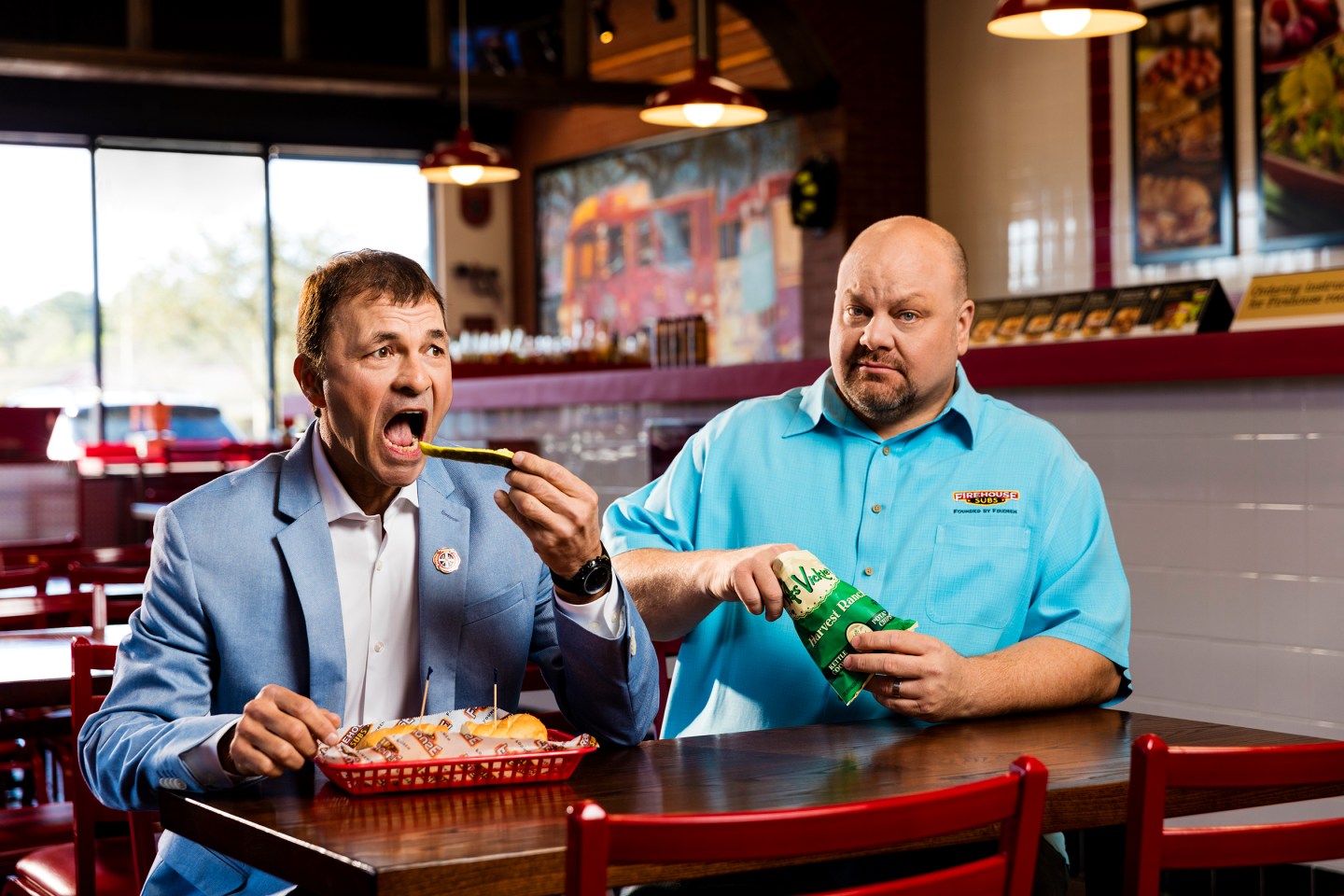 Chris and Robin Sorensen were second-generation firefighters perpetually looking to supplement their salaries. But their ventures flamed out until they started a restaurant. The launch, in 1994, was precarious: They had $100 in the bank, thousands in credit card debt, and lots of burned bread. Today, Firehouse Subs is cooking, with 950 “fast casual” restaurants and $600 million in 2015 sales. The Sorensens’ story:

Chris Sorensen: Robin and I come from a family of firefighters. Our dad worked as one for 43 years and also had a TV store in Jacksonville to supplement his income. We helped in the shop and grew up with an entrepreneurial spirit. I played in a band, but in 1981 I realized that my dream of making it big wasn’t going to happen. I went home to Jacksonville, and my dad suggested I work for the fire department.

Robin Sorensen: Dad sold his TV business in 1986, when I was 18. I didn’t know what I wanted, so I signed up for the fire academy. I loved it and worked as a fireman and as an EMT for nearly three years.

Chris: We were always trying to make money on the side, but things never worked. We tried a lawn business, a videotaping service, and a Christmas tree business that never launched. We were always broke. Then Robin began managing a restaurant.

Robin: Chris and I love cooking, and that led to ideas of opening our own restaurant. We discussed concepts from a microbrewery to a Southern-style restaurant. Then in 1992, a friend suggested we look at a sub shop that was franchising. We loved the idea. But after meeting with them, we decided we could do something better on our own.

Chris: We did two years of research. We’d go around to different sub shops and say, “We’re on a diet. How much meat do you use?” We wanted our place to be known for quality and quantity, so we decided to double the portions others served.

Robin: At the restaurant I managed, the food-­distributor delivery guy was a friend. He would save receipts from other restaurants for me to look at. So I knew what kind of meat people were buying and the price per pound. The bread-delivery guy would gossip about competitors. It was all good information.

We approached Toney Sleiman, a developer in Jacksonville who’d been a customer in our dad’s TV shop, and told him about our idea for Firehouse Subs, offering hearty, affordable meals. He knew us, and he liked firemen. He gave us restaurant equipment for free and said he’d build out a store for us in a new shopping center.

Chris: We were excited and scared to death. We were broke, so I got $2,000 from the Jacksonville Firemen’s Credit Union and a $5,000 loan from my mom’s cousin.

We didn’t know what we were doing at first. We’d go for a construction permit to open the store, and they’d ask, “Where’s your health permit?” But we figured everything out and opened the first store on Oct. 10, 1994. The whole family came to work with us.

Chris: We had $60 cash in the drawer, and if it didn’t work that first day, we’d be in trouble. At first, we got everybody’s orders wrong. We had spent so much time on the store’s details that we hadn’t memorized the menu, so we kept turning around to look at the menu boards when we took orders.

Robin: We burned a lot of bread with one toaster. It took us two to three days to figure out we needed more than one steamer. Still, we did $26,000 in sales the first month. We were tickled pink.

Chris: I loved the early days. We’d get samples of meat and cheeses and go to my house to experiment with the steamer and slicer. Friends donated fire department coats and hats [which were used as decorations].

I stayed on with the fire department for four years after we opened to maintain income. I was working close to 60 hours a week. It became too much, so I left the department in late 1998.

Robin: I paid myself $12,000 to $15,000 per year while we grew, and we ran a very lean operation, with only one paid employee because the rest were family. After a year, we owned two restaurants and had one franchise. We committed to franchising two more but realized we weren’t ready, so we bought the three stores back and changed gears. For the next five years we opened only corporate-owned restaurants and became very profitable.

Chris: We hired consultants to help us figure out the infrastructure for franchising, how to train people and keep consistency. In 2000 we turned the franchising machine on and haven’t stopped.

Robin: Our company became debt-free in 2001, and we started loaning money to our franchisees. Chris and I didn’t take profits until our 10th anniversary in 2004. ­Financial discipline is probably why we’re here today.

Chris: We’re different personalities, but we think alike on business decisions. Some brothers would kill each other, but not us.

Robin: We work very well together. I like to take charge, and Chris doesn’t. It’s a perfect match.

A version of this article appears in the June 15, 2016 issue of Fortune with the headline “Family, Firefighting—and Hefty Sandwiches.”