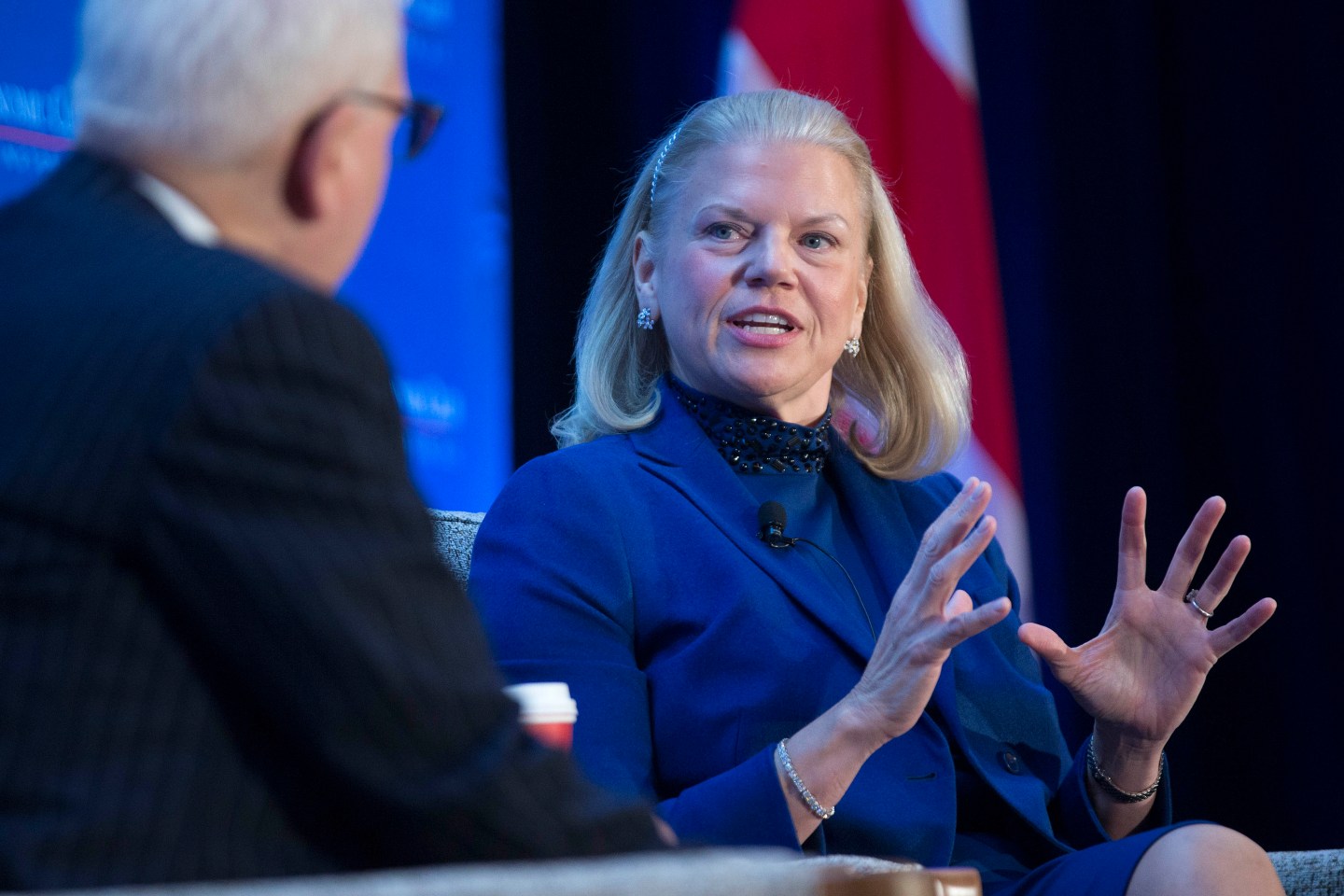 Virginia "Ginni" Rometty, chief executive officer of International Business Machines Corp. (IBM), speaks to David Rubenstein, co-chief executive officer of Carlyle Group LP, left, during an Economic Club of Washington breakfast discussion in Washington, D.C., U.S., on Wednesday, Dec. 3, 2014. IBM, under pressure to reverse declining profit, is racing to sign up new cloud-related business as it tries to prove to investors that it can quickly transition to a new era of technology. Photographer: Andrew Harrer/Bloomberg via Getty Images
Photograph by Andrew Harrer — Bloomberg via Getty Images

IBM (IBM) has weathered 16 consecutive quarters of declining revenue. But CEO Ginni Rometty is optimistic that the company’s wager on “cognitive computing,” the term it uses for applied artificial intelligence and machine learning technologies, is the biggest bet the company will make in its 105-year history.

“We will solve some of the world’s greatest problems,” she said confidently at the 2016 Code Conference in Rancho Palos Verdes, Calif.

But the question hounding the chief executive: Can IBM get there fast enough? The company is moving quickly to replace its declining legacy businesses with cloud computing efforts, but investors argue it’s just not fast enough.

Rometty said it’s hard to compare. IBM has 380,000 employees—far more than most companies.

“It’s easy to have an act one and two,” she said. “Go ahead and have an act three, four, and five. The saying is the easy part. The doing is the hard part.”

“If five years, there is no doubt in my mind that cognitive computing will impact every decision in five years,” Rometty said. Healthcare, sure—but also education, financial services, and manufacturing. “This is going to help us deal with the gray area,” she added. “And that is a very different business.”

IBM believes Watson has lots of potential, but doesn’t break it out in financial disclosures. (The larger analytics unit it belongs to tallies $18 billion in sales.) Rometty said it wants to nurture it.

She added: “If it’s digital, it will be cognitive. If you think that, you’re going to change the way you run a business.”

That’s all well and good strategically, but tactical challenges for IBM remain. The company is a massive ship to turn. It must move quickly both to match its customers’ expectations as well as stay ahead of its competitive set. IBM has succeeded in transforming itself before, but this transition must happen faster than ever before. Is IBM ready to make the hard decisions?

“I don’t think anybody’s just B2B or B2C anymore. You are B2I—business to individual,” she said, before adding in reflection: “You aren’t going to stop it. The trend is going to keep moving.”