How Detroit Plans to Become This Summer’s Vacation Hotspot 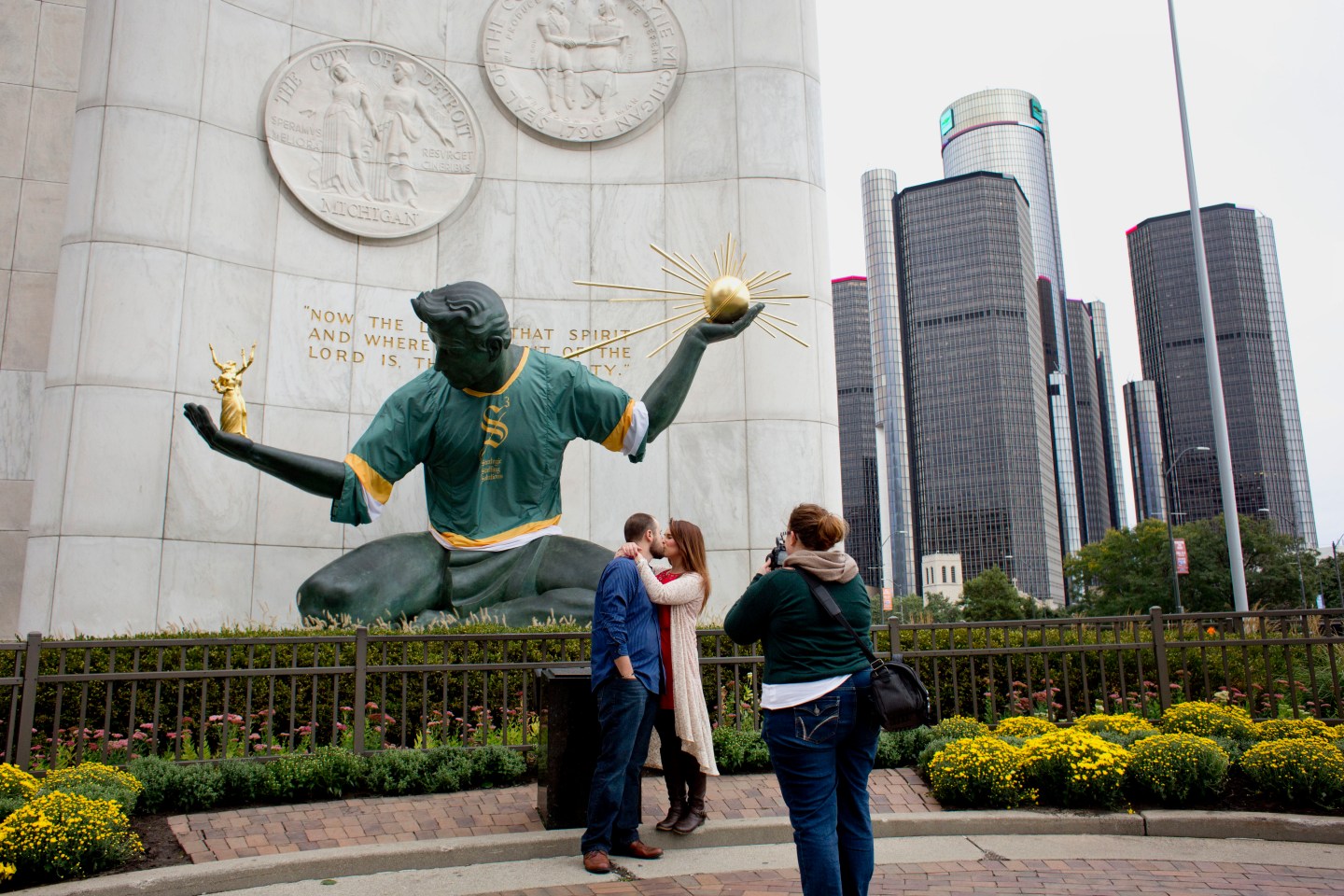 A couple kisses while standing for a photograph in front of the Spirit of Detroit monument in downtown Detroit, Michigan, U.S., on Sunday, Oct. 4, 2015. Ten months after emerging from a record $18 billion municipal bankruptcy, Detroit is functioning in ways unseen for months and even years -- street lights are on, parks get mowed, municipal debt is sold on the public market and the police are training civilians to manage traffic at clogged intersections. Photographer: Laura McDermott/Bloomberg via Getty Images
Photography by Bloomberg Bloomberg via Getty Images

This time of year, the State of Michigan is usually just promoting Sleeping Bear Dunes, a breath-taking national lake shore on Lake Michigan, or the 650+ public golf courses as “America’s Summer Golf Capital.” But the state is spending about $1 million of a $12 million national ad buy for its ongoing “Pure Michigan” campaign to bring people to — the City of Detroit…in summer.

To many Michiganders, let alone Detroiters, it seems like an iffy proposition. After all, the city: is in bankruptcy, the largest American city ever to file for Chapter 9; has the second highest murder-rate in the U.S.; and is in the national news for shutting off water to many of its residents for not paying their bills. The only vacationing in Detroit that would occur to many inside and outside the city, would involve orange vests and hard-hats, and a walking tour of “ruin-porn” of some of the thousands of abandoned buildings in the Motor City.

The TV ad that is running now, called “ Can a city have a soul?” spotlights: Tiger Stadium; the always packed Slows BBQ; The Shinola company, which has gained national attention for its Detroit-made watches; Eastern Market, which provides produce and Michigan-made comestibles; urban street art; lush urban gardens; and Diego Rivera’s murals at the Detroit Institute of Art.

The new spot, in 30- and 60-second versions, runs on YouTube and cable stations, including the Travel Channel, TLC and the Food Network. Actor/comedian and Michigan native Tim Allen intones“…There’s nothing like experiencing the unmistakable sounds, the memorable sights, and the limitless energy of a city called Detroit.” And he’s not joking.

“This is more than a leisure travel campaign — this is really about challenging and shifting people’s perceptions of Detroit and celebrating America’s great comeback story,” Dave Lorenz, vice president of Travel Michigan, part of the Michigan Economic Development Corp told the Detroit Free Press.

Despite Detroit’s awful crime statistics and lingering problems, though, the city has been attracting investment and showing signs of progress. On May 26, Nike opened its first Detroit store, 22,000 square feet of retail space. A Whole Foods has gone in downtown near Wayne State University, and Shake Shack and Walhburgers are also opening. The Detroit Redwings are getting a new arena. And it would surprise many to learn that Detroit claims to have the second biggest live theater district in the U.S. outside of New York City based on seats in its downtown theater neighborhood. Who knew?

Trying to lure people in from the ‘burbs

About 15 million people visited metro Detroit in 2015, according to the Metro Detroit Convention and Visitors Bureau. Those numbers are driven heavily by people coming to the city and surrounding suburbs by the auto industry, trade shows and casinos. The campaign is as much directed at people who already come to Detroit for business now, encouraging them to do more and spend more once they are here, as it is aimed at people in the region whose notion of a broken city were formed years ago and have yet to change.

Jeanette Pierce is executive director of The Detroit Experience Factory, a decade-old company that gives some one dozen different themed tours, such as a downtown walking tour, and an art and architecture tour that spotlights a collection of outdoor murals created by international artists. Pierce puts together custom tours for groups of company employees like Nike and Bosch, but she says more than half of the people who take her tours live in Michigan, and are curious about the development and new energy they read about happening in the “The D.”

Welter guided his first tour in late 2011, and his clients pay $45 for a three-hour tour. His tours are booked many weeks in advance. Typical of the patrons are travelers from abroad who visit Detroit on business, have seen some the pictures on the Internet and want to see for themselves before its gone.

For the more independent minded, you can choose from a menu of self-guided walking, driving and bike tours provided through an effort at One Day In Detroit by Loveland Technologies, which specializes in mapping cities like Detroit for investors and developers, and a firm called Dandelion that assists clients with projects intended to impact communities in a positive way. These tours include those conceived by Detroiters for Detroiters and will take you, for example, on a statue tour of Detroit, a “hacker and maker” tour, and a tour that will take you to some of the weirder efforts to beautify Detroit like the Heidelberg Project, a 25-year-old neighborhood-sized art installation made largely of found objects like plush toys and car parts. Nearly everything in the two-block area, from trees to houses to fences, is adorned with eclectic objects; don’t miss the installation of hundreds of shoes scattered in the street. This is what New York magazine rightly dubbed “Oddball” Detroit.

Maybe so, but its that gritty character that is attracting Millennials to the city in droves to live and play. Steven Cullen is a 27 year old who grew up in the posh Detroit suburb of West Bloomfield, but who makes his home now downtown in an apartment near the University of Detroit Mercy for $850 a month. “There is nothing to do where I grew up,” says Cullen. “All my friends are down here.”

Cullen, a video producer and self-described theater geek, takes in shows in the downtown district, but recently went to see a show at The Detroit Repertory Theatre, which has been operating in a fairly dodgy neighborhood , filled with empty lots where homes and businesses once stood, without interruption since Dwight Eisenhower was in the White House. On his recent visit, the theater’s owners in a pre-show talk with patrons were giddy about the city restoring streetlights to their neighborhood for the first time since the 1990s. “How great is that, and yet a little sad that we are celebrating streetlights,” says Cullen.

The Pure Michigan ad may well rattle perceptions about Detroit held by those living in Michigan beyond the city borders, as well as outside the state. But perhaps Detroit is ready for a brighter light to shine on what is moving people to invest there, move there, and even take a holiday there.