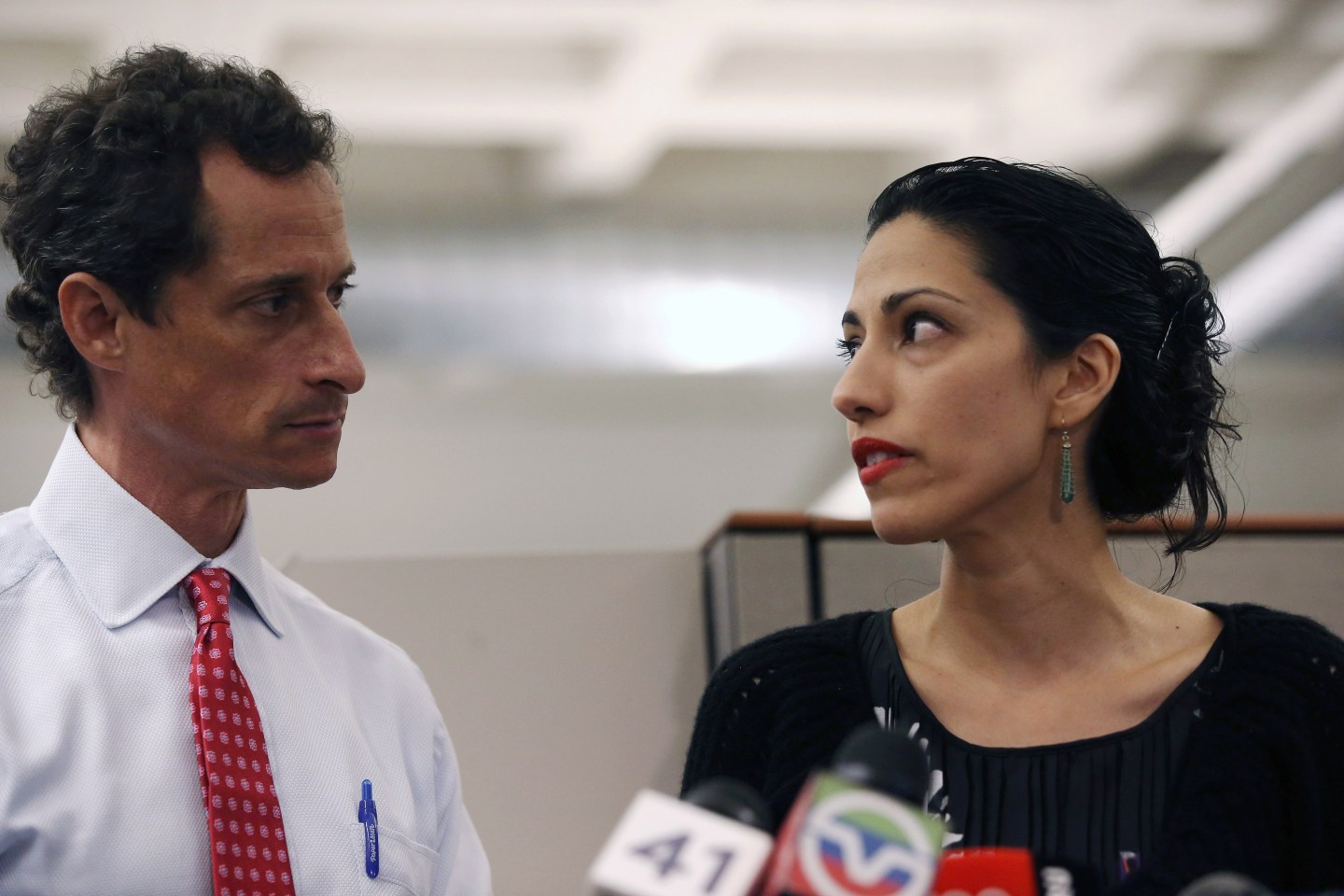 In 2013, disgraced former congressman Anthony Weiner was running for mayor of New York City when his second major sexting scandal hit the 24-hour news cycle like a dirty bomb: revelations of five-times daily phone sex sessions with a woman other than his wife that were arranged under the saucy alias “Carlos Danger.”

For Weiner’s wife Huma Abedin — a longtime Hillary Clinton aide de camp who now serves as vice chair of the presidential frontrunner’s election campaign — the humiliation and public scrutiny of being caught up in “Weinergate” Part 2 took a steep toll. “It’s like I’m living a nightmare,” Abedin says in a scene in the new documentary Weiner.

The film, which premiered at the Sundance Film Festival, is having a limited release in theaters beginning May 20. (It is set is for broadcast on Showtime in October, just weeks before Election Day.) Shot by Weiner’s former district chief of staff-turned-documentarian, Josh Kriegman, who was given nearly untrammeled access, the movie provides a bracingly intimate insider’s view of a politician getting crushed by scandal, even as he emerges as a more complex, ambitious, contrite and ultimately human character than the cyber-sexual libertine splashed across cable and tabloid news at the time. (Weiner and Abedin reportedly have opted not to see the movie before its release.)

But for the chattering classes, Weiner unzips an equally compelling portrait of Abedin, Clinton’s power-brokering “shadow” and influential consigliere, about whom the former Secretary of State once famously said: “I have one daughter. But if I had a second daughter, it would (be) Huma.” Abedin’s decision to stand by Weiner after his sex-texting affairs went public has become a subject of intense curiosity, much like Hillary and Bill Clinton’s much-dissected marital dramas. And given that the movie is opening during a bitter campaign and will be shown on Showtime weeks before November election, it’s likely to capture people’s attention.

The film presents Abedin as a cornerstone of her husband’s political resurrection, appearing before the world media at his press conference for the first time, proclaiming forgiveness for his marital trespasses and even critiquing his wardrobe (“I’m not crazy about those pants,” she tells Weiner) during his rise to the top of the mayoral polls. But after the second scandal breaks, Abedin is shown becoming quietly exasperated and, moreover, increasingly reluctant to support Weiner while the press ponders her as “a victim of spousal abuse” and her husband’s campaign draws towards its inevitable failure. “Honey, I’m gonna leave,” he says in another scene. “Leave a few minutes after me. Or someone might think you’re married to me.”

Fortune caught up with Kriegman and co-director Elyse Steinberg who explained how Weiner serves to provide a more fully fleshed understanding of Abedin as a wife, mother and pure political animal — as well as a kind of parable in this election year in which Trump and his theatrics have taken center stage.

Fortune: How did you persuade Weiner to let you make this film?

Josh Kriegman: I had known him very well as a complete, dynamic and multi-faceted person. Over the course of his scandal he had been very much reduced to a punchline. And then he decided to run for mayor of New York City. That’s when he let us in to film — from the day he announced he was running until the last day of the election.

So the initial idea was a kind of comeback narrative?

Kriegman: When we started filming, a lot of pundits laughed him off as a joke. Then, over the course of six weeks, he rose in the polls to lead. Elyse and I thought, “Wow, this is an incredible comeback story.” Then the scandal surfaced and we continued to document everything as it unfolded.

At that point, Weiner could have kicked you out. Why didn’t he?

Elyse Steinberg: Its a very good question — something we wondered about ourselves and wanted to put into the film, a question we posed directly to Anthony. He gives us an answer: that he wanted to be seen as the full person that he was. That was certainly our intention with this film.

What was it like to be in the room with him and Huma for these tense moments when his sexting indiscretions were coming out?

Kriegman: One of the clear ground rules was if he or Huma wanted me to turn off the camera or leave the room, I would. The day the scandal broke half way through the campaign is an obvious one where more revelations emerged about his sexting. He and Huma and his staff are trying to figure out how to manage this thing. He asks his staff to leave the room but allows me to keep shooting. It was definitely an intense moment to be there as a witness. Certainly the thought crossed my mind, “I can’t believe I’m here right now capturing this!”

Weiner has an emotional confrontation with a guy in a bakery who says “Your wife’s an Arab.” Then what you filmed of it wound up on The Daily Show with Jon Stewart. Was part of the agreement that your footage could be used by the campaign?

Kriegman: There are a few moments throughout filming the documentary where the campaign asked if we would give over some footage to correct the record. Because I was there through so much, I was able to capture things that even the media missed. When he gets into the fight with the customer in the bakery, there was a key part of the story that was missing. So the narrative of that moment went from “Oh, Anthony’s having a meltdown on the campaign trail.” to “Oh, OK, Anthony’s defending his wife from this pretty nasty comment.” In an instance like that, we were very happy to correct the record.

The movie is effectively Huma’s moment stepping into the spotlight. She was crucial to Anthony’s comeback. But you show her pulling back more and more as the scandal grows. Talk about the picture of her that emerges and what you saw of their relationship dynamic as he tries to re-inject himself into American political life.

Steinberg: She has been guessed about endlessly in Vanity Fair. Just as Anthony was reduced to a caricature, so was she. In this film, viewers get an opportunity to see a different side of Huma as a wife, a mother, a person with a very important job and juggling all that in front of a bank of cameras. You also get to see some of the judgment that was placed upon her. She was criticized for staying in the marriage and for being at the press conference. Why should a woman be judged by her husband’s flaws?

So why do you think she was so invested in his political resurrection?

Steinberg: Her husband was running for mayor and she was supporting him in that.

Kriegman: Anthony does say in the beginning of the film, they wanted their life back. He had a couple decades’ career of being in congress. That was the life they had built together: a life of public service. For both of them, it was genuine. They wanted to get past this scandal and give Anthony the chance to reenter public life.

There were reports that Hillary Clinton told Huma to distance herself from Anthony after the second sexting scandal. Do you think there was any truth to them?

Kriegman: In the film, you have a local reporter chasing them down the street holding up a magazine cover, saying, “Huma has to choose between her husband and her boss.” It’s three years later, she’s still married to Anthony and she’s the vice chair of Hillary’s campaign. So maybe she didn’t ultimately have to make a choice.

The film says so much about the way we consume information as a culture now. What do you hope audiences will take away?

Steinberg: One of the things that was very important to us was to have this be about more than just one person or one campaign. It provides a look at how our politics today is driven by spectacle and an insatiable appetite for entertainment. We can see how coverage is frequently being defined by tweets and one liners. We’re living in this very fast paced, social media world. And where we feel our film is very relevant is looking at Donald Trump. Anthony is very different from Trump personally and politically but they both understood that in order to be a successful politician in today’s 24-hour news cycle, you need to put on a show. By being brash and having an air of authenticity, you get votes. We’re in a moment right now where we’re excited for our film to be part of the conversation about politics and media.