This Company Wants To Disrupt How Artificial Limbs Are Made 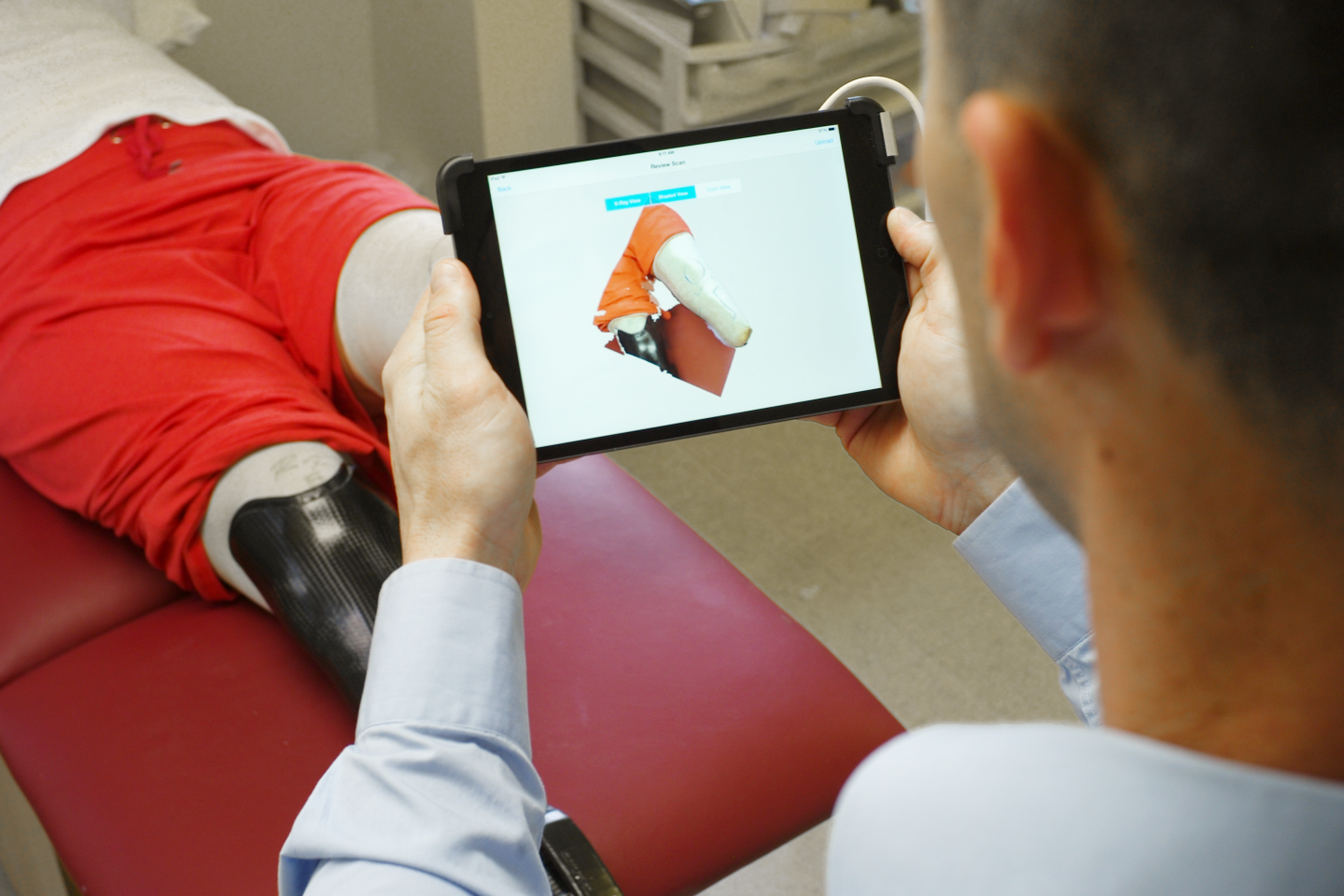 In many ways Jeff Huber is the quintessential startup founder. He dropped out of college, spent three months as part of the hot Silicon Valley accelerator, Y Combinator, and is working with 3D printers to upend an entrenched industry that is still dependent on the old way of doing things.

Huber’s company, Standard Cyborg, hopes to fundamentally remake the way artificial arms, legs, and the sockets required for fitting them are manufactured. It uses computer aided design to create a 3D scan of patients’ residual limbs, the part that remains, on computers to create a better-fitting prosthetic.

Today, most prosthetics and sockets are still produced the old-fashioned way. A specialist takes careful measures of the remaining limb, creates a plaster copy, and then modifies it with hand tools. It’s a time-consuming process that can take up to four hours of work. Standard Cyborg, instead, creates a computer version that speeds up the process to no more than an hour.

“Most prosthetics are made with a block of plaster and a glorified file,” says Huber, referring to the hard hand tool uses for shaping surfaces. “It’s time-consuming, expensive, and not reproducible. We’re providing an interactive sculpting environment. You can create what you want.”

Huber’s idea isn’t totally novel. By partnering with doctors around the world, groups like Enabling the Future have printed prosthetic hands for children for about three years. Meanwhile, Open Bionics, a U.K. company that is working on 3D printing prosthetic hands, claims it can produce a socket in less than two days, and plans to start selling its custom bionic hands sometime after November.

Prosthetic specialists in a dozen U.S. and overseas clinics are already using Standard Cyborg’s new software, which was released in March, to design sockets using computer aided design tools. They can then print those sockets on desktop 3D printers.

Currently, the prosthetic specialists who are testing the technology are printing sockets, not limbs. The socket is a custom-made part of any prosthetic that directly connects to the limb of the recipient. As such, it’s arguably the most important component of any prosthetic arm or leg.

Standard Cyborg supplies an iPad mini and a handheld 3D scanner to do the actual scanning work. After the specialists are satisfied with the socket designs they’ve created, they can send it to Standard Cyborg for the final 3D printing or use their own 3D printer to produce the socket.

In the future, Standard Cyborg may expand into software for also creating prosthetic arms and legs. For now, the hold-up is finding a more resilient material that will allow a 3D-printed limb to withstand the wear and tear of everyday use.

“PLA plastic is just not strong enough,” Huber says, referring to one of the most common thermoplastics used in 3D printing.

The primary benefit to patients for speeding up the process is the cost. Prosthetic specialists estimate that a leg can cost between $4,000 and $10,000. According to the American Orthotic and Prosthetic Association, nearly 100,000 lower-limb prosthetics are created annually.

Private insurance companies pay a fixed reimbursement to prosthetic clinics. Medicare data from 2014, the latest year of data currently available, shows that Medicare paid for about 26,000 lower-limb prosthetics that year.

As for the specialists who make prosthetics, technology provides a number of benefits: less time molding plaster, which means more time spent with more patients. Computerizing the process also makes it easier to experiment with different designs by eliminating concerns about material costs and wasted time if a new design fails to fit a patient. It also increases the ability to track design successes over time.

“It’s taken me some time to get really used to it, but it lets me see more patients,” says Sean Boatright, a certified prosthetist with Diablo Prosthetics in Walnut Creek, Calif., just outside of San Francisco, and one of the early users of Standard Cyborg’s new software. “It’s really been helpful in making sure that the shape in the socket is what you’re expecting.”

“The other nice thing is I’ll have a library of these patient models instead of saving a bunch of plaster models in the office,” adds Boatright. “It’s really started to advance the way that the field is able to provide these prosthetics to people. It doesn’t have to be that kind of time-consuming, archaic method of building a leg.”

Disrupting how prosthetics are fitted and manufactured is a question Huber, 26, has thought about his whole life. He was born with fibular hemimelia, which left him without a fully-formed fibula in his left leg. Today Huber wears a prosthetic leg below his knee that he says cost $23,000.

Standard Cyborg first made the media rounds early last year after it was accepted into Y Combinator for its product, the Water Leg, a custom-made waterproof leg prosthetic designed to be worn in the shower or at the beach. Nearly 200 U.S. clinics take orders for Huber’s Water Leg. But since leaving Y Combinator, his focus at Standard Cyborg has shifted to the software he recently released. Huber says focusing on software was something the startup always wanted to do.

“Our fundamental premise is that software can improve prosthetics in a big way,” he says.

The software has been a big help to people like David Krupa, a prosthetist in Ecuador and co-founder of the Range of Motion Project, which fits mostly young people in poor areas of Latin America with prosthetics.

“The most important part of any prosthesis is the socket,” he says. “You could have the most advanced knee and foot technology available, but if the socket is not fitting properly the patient will be unable to use the device. Standard Cyborg eliminates a lot of the labor during socket fabrication. It’s speeding up the fabrication process and reducing materials and time costs significantly.”

But disrupting the prosthetics industry isn’t as easy as handing prosthetists a scanner, an iPad, and new software. Prosthetists usually have different ways of designing a prosthetic, something influenced by the needs of the recipient. Runners need better shock absorption in their prosthetic leg, and therefore may require more gel liner in their socket, while someone who just needs to get around the house will benefit from an entirely different design. Huber now has to think about how to add tools and functionality to Standard Cyborg’s software without cluttering the interface to the point where it’s too confusing to even use.

The next step for Huber and his startup is the larger commercial release of the new software, set for the next few months, beyond the contracts he has with clinics for testing. He’s also planning to test a variety of printable plastics to see which ones are tough enough for making prosthetics and the daily wear and tear they undergo.

Expanding operations so Standard Cyborg can deal with worldwide demand is one challenge Huber will have to overcome. He says the company is “mostly set up for prosthetists in the U.S.” right now.

Getting more prosthetic specialists to buy into a new way of doing something will also be the sales challenge. The 3D-printed hands that some prosthetists use already elicited early fears by some more traditionalists that a new technology might undercut their business, says Huber. Designs for these hands, which are created in software and printed on desktop 3D printers, are readily found online.

But many of these hands are created for children—temporary prosthetic hands are sized and swapped out while kids are still growing—and aren’t meant to take the place of a professional prosthetic designed by a specialist. More and more, Huber says, those specialists want to be involved in using new technologies to design prosthetic limbs.

“People are ready for this,” he says. “They see it as the wave of the future. This is the way that it’s all going to be done in a very, very short period of time.”