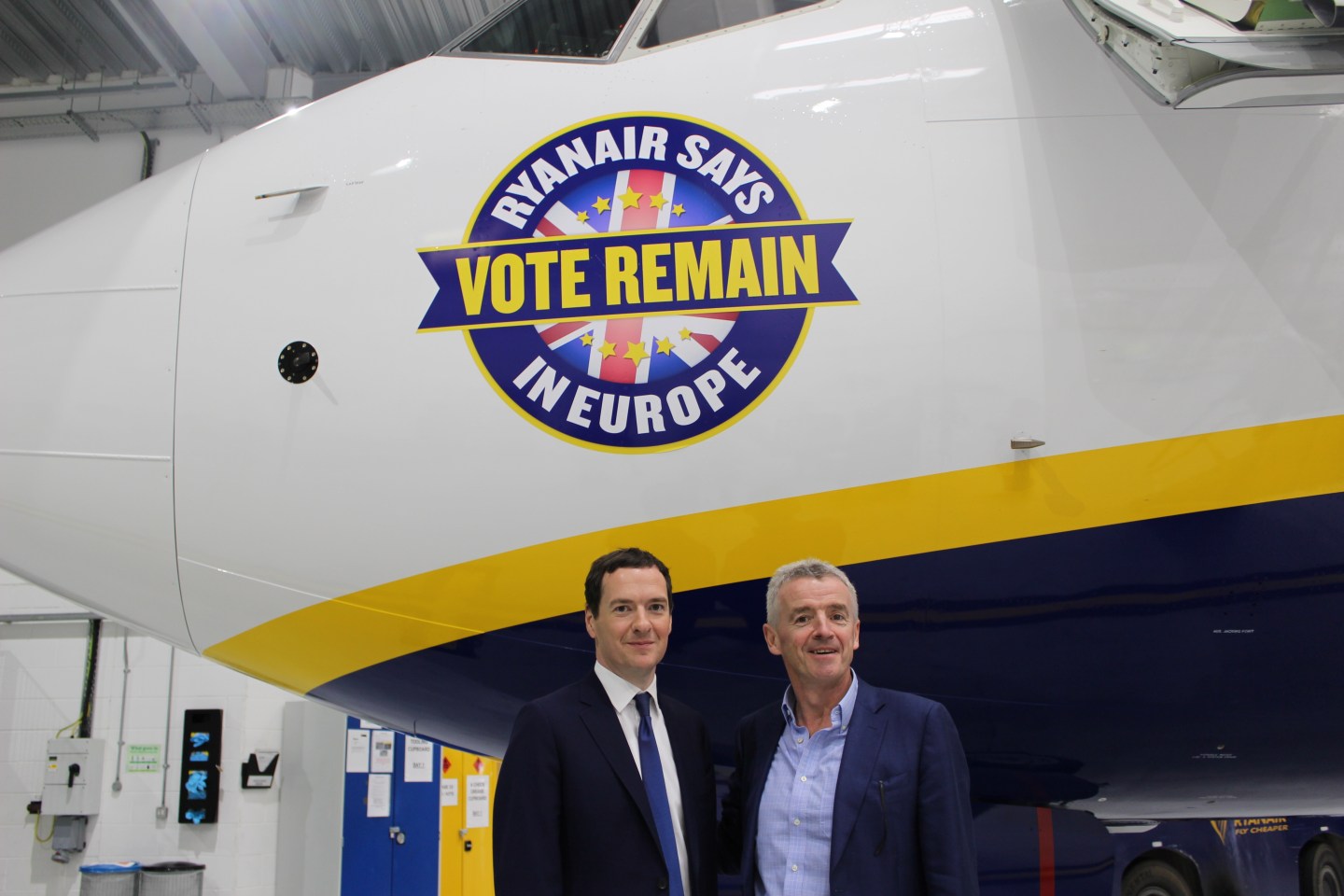 Perish the thought that the man who disrupted Europe’s cozy national carriers is now part of the same establishment that doesn’t want to rock the boat.

Back in 2011, when Ryanair PLC (RYAOF) was being refused permission to buy Ireland’s Aer Lingus on antitrust grounds, its founder and chief executive Michael O’Leary called the European Union an “Evil Empire” and its commission in Brussels “the Death Star” (click here to hear the great man in full flow). Back then, he would urge young entrepreneurs to “get the hell out of Brussels as quickly as you can, or any streak of innovation and intelligence will be beaten out of you.”

Fast forward five years and, whaddaya know, O’Leary is spending his money and his airline’s to make sure that the U.K. votes in favor of staying in the Evil Empire. He’s even repainting some of the airline’s planes with pro-Remain slogans, ahead of the potentially epoch-making June 23 referendum, just to make sure the point gets across. (President Barack Obama missed a trick with Air Force One on his recent visit, obviously.)

At a recent Bloomberg business conference in Dublin, O’Leary urged attendees to “get out and campaign” to keep Britain on board, saying that “there’s a real danger the lunatics on the Leave side are going to win.” (Though by and large, the bookmakers still don’t give that more than a one-in-three chance.)

It isn’t hard to figure out why O’Leary has changed his tune: Ryanair carries over 35 million customers between the U.K. and the rest of Europe every year—36% of its passenger movements either originate or end in Britain. A rising proportion of that is accounted for by traffic to central and eastern European destinations: out of the 11 latest U.K. connections launched by Ryanair, 10 have been to Polish destinations and the other one was to Bucharest. That traffic that would be grievously hit if Poles and Romanians suddenly lost the automatic right to work in the U.K., as would almost certainly happen in the event of a “Brexit.”

But Ryanair also has another very healthy business ferrying British tourists to and from sunnier parts of the continent, and that too could suffer if, as threatened by many, the U.K. economy and the pound stumble after a vote to leave.

While O’Leary’s stance may have changed in line with his financial interests, his style has remained refreshingly the same. In his Dublin speech, he had little time for those who think that foreign businessmen, like foreign politicians, shouldn’t interfere in a matter of domestic politics.

“Businesses have got be very active,” O’Leary said. “They tend to shy away from political involvement. We’ll be criticized for doing it. For opponents who believe we shouldn’t get involved, to hell with you.”